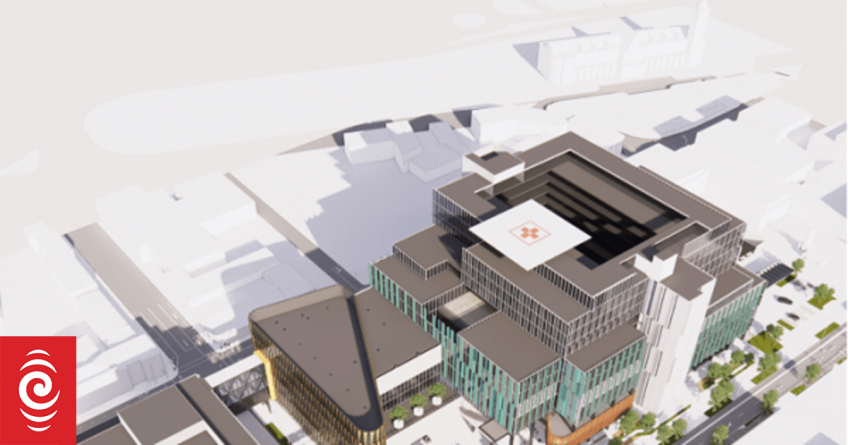 A 421-bed inpatients building for the new Dunedin Hospital was signed off by Cabinet last year, except, according to Te Whatu Ora, it was not meant to.

Yesterday, Te Whatu Ora announced another $110 million would be poured into the project, bringing the cost to $1.58 billion.

A review of the project suggested $200 million would be needed to meet the original plans and cuts were made, including what appeared to be 23 beds being scrapped.

But today Te Whatu Ora confirmed the business case which went to Cabinet was not quite as detail-oriented as one might expect and there were only ever meant to be 410 beds.

"The number of overnight beds planned for the New Dunedin Hospital Inpatient building was always 410," her response to questions from RNZ this morning said.

"During the planning process, 11 beds from medical/surgical were redistributed, with three going to older persons mental health beds and eight to rehabilitation. The total count of medical/surgical beds should have then shown 11 fewer but instead those beds were double-counted, leading to an incorrect total of 421 beds. This was an error."

When the hospital opens in 2029, 398 beds will be available with space for 12 more to be added in future.

It was unclear when the error was first noticed, but yesterday's confirmation of further funding for the hospital was the first time 410 beds was suggested.

Even that was down on 454-bed capacity which was contained in the 2019 master plan.

In addition to the smaller number of beds in yesterday's release of information, Te Whatu Ora also confirmed there would be no PET CT scanner, one fewer MRI scanner, two fewer operating theatres, and one link bridge between the inpatient and outpatients buildings was also scrapped.

The opening of the inpatients building had also been delayed by a year.

The outpatients building had already had its opening delayed from next year until 2025.

Fouwler said that remained on track.

"There are supply and construction industry pressures that are being felt across all infrastructure projects in the country. However, the outpatients building is still expected to be delivered in 2025," she said.

"Enabling works for the inpatients building will begin in January 2023. The construction start date of first quarter of 2024 for the inpatient building is slightly later than announced earlier due to the value management work and change to design. This has now meant that the building is expected to be operational by 2029 rather than late 2028."

Labour campaigned in 2017 on getting the rebuild started before the 2020 election - a promise which was not fulfilled - and getting it completed before the 2027 timeframe claimed by the then National-led government.

After taking the reins of power, Labour reiterated that promise. But since then, the hospital's budget and timeframe had blown out, while the plans had shrunk.

"After spending months denying there were any changes planned to the capacity of the new hospital, Health Minister Andrew Little has delivered just that, cynically announcing the news just days before Christmas," he said.

"The new hospital should serve the community for the next 75-100 years. The capacity that was approved by Cabinet was already the bare minimum required, based on frankly heroic assumptions about reduced admissions and average length of stay.

"Cutting capacity further from those bare minimum requirements is petty and dangerous. Mr Little is this government's Christmas grinch, making cuts to crucial infrastructure after five years of delays to this vital project.

"The people of the South deserve better than a health minister who is arrogant and out of touch with its needs."

Minister of Health Andrew Little would not front Morning Report today, with his office referring all queries to the duty minister.

They, in turn, referred any questions on the matter to Te Whatu Ora.