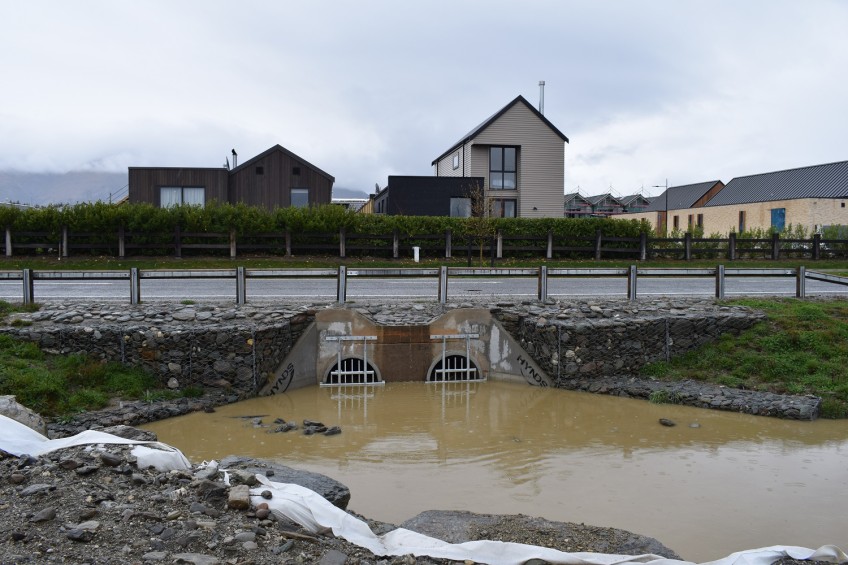 Otago Fish and Game is demanding that Queenstown Lakes District Council and the Otago Regional Council “sort out” why storm water from two Wanaka subdivisions is ending up in the Clutha River.

Otago Fish and Game officer Paul van Klink says “We’re not engineers, we’re not experts in subdivision discharges of storm water, but we don’t believe what we are seeing is right, it is an engineering issue.” The stormwater channel carrying runoff from the Northlake subdivsion through the Hikuwai development.

On Friday QLDC communications and the ORC issued a media advisory saying they had received a number of reports of flows of discoloured and fast-flowing water into the Clutha/Mata-Au River near the Hikuwai and Northlake developments.

In the statement the QLDC says it “recognises that this has caused concern amongst the Wanaka community and wants to assure residents that both councils have been working closely together to investigate the cause and monitor the run-off.”

“While there have been storm water flows from those sites, recent monitoring results have shown that the water being discharged, whilst discoloured after events such as significant rain fall, is not silt-laden and has been within the expected range for water quality standards.”

QLDC Principal Monitoring and Enforcement Officer Anthony Hall said “over recent months there has been an improvement in those discharges across a number of developments as a result of the QLDC Planning and Development and Regulatory teams actively working closely with developers.”

Fish and Game’s van Klink says the storm water that entered the Clutha River on Sunday 30 September, “definitely had sediment in it, as it changed the colour of the Clutha river.”

He says Fish and Game didn’t measure how much sediment was in the water so they don’t know the effect it would have had on fish “but there are methods to reduce it (the sediment) and those measures are not happening”.

As well as the quality of the water coming from the subdivisions, van Klink is also concerned about the quantity of water.

“In the past, these areas have been grass or farmland but now because of earthworks the topsoil is exposed, often for weeks, so when it rains there is no grass or root structure to take up that moisture and the water gets channelled down to an outlet. You go into the national parks and it takes a lot for rivers there to discolour, it is all about land use,” van Klink says.

University of Otago Department of Zoology Head and fresh water ecology lecturer Professor Gerry Closs is also calling for the QLDC to “do better” in managing storm water run-off.

“It seems the QLDC think that they’re meeting all the required water quality standards. Well, if that’s the case, then they’re obviously not stringent enough. I guess then some people will come back and say it’ll stifle growth. My response would be, well this is a special area. If you build in the Upper Clutha basin, expect some additional constraints on what can be done given the significance and sensitivity of the area.” Professor Gerry Closs of Otago University - using Wanaka as an example of how things should not be done.

Professor Closs says he is now using photos of the sediment stream going down the Clutha River coming from the Wanaka subdivisions to teach his senior level students of freshwater ecology what shouldn’t be allowed to happen.

Wanaka resident Anna Simmonds is a regular walker on the Hikuwai Department of Conservation reserve that abuts the subdivision and believes she was the first to contact the ORC about the sediment entering the Clutha River on Sunday, 30 September.

“I took video as well as photos as the noise of the water was much louder than I expected, and published the video on You Tube.”

Simmonds says she does not want to have “a fight” with the QLDC but just wants them to “take remedial action”. She says she plans to continue to photograph any future rain events which result in storm water entering the Clutha River from the subdivisions and is considering contacting the ombudsman if the QLDC doesn’t resolve the issue.

Hikuwai developer Lee Brown categorically denies the storm water is coming from his subdivision. He invited a Crux photographer on site following the last significant rains on Sunday 30 September to see first-hand the storm water being discharged onto his property from Northlake and the channelling he has created to take it through his property and onto DOC’s Hikuwai Reserve. Crux contacted the three Wanaka ward QLDC councillors for a comment on the QLDC’s media advisory but only Ross McRobie replied and suggested we put any questions directly to Mayor Jim Boult and General Manager Planning and Development, Tony Avery.

“Whilst there have been some improvements made to the site management of water run-off from these developments, we acknowledge that the community has expressed dissatisfaction with these management provisions and the effect they appear to be having on the Clutha Mata-Au River and embankments. QLDC Enforcement Officers have been monitoring these developments and it is apparent that the water run-off provisions need to be improved and we are looking to address these with some urgency.

“We are currently looking at further actions that need to be taken across the developments and for the individual building sites. As soon as we have an agreed plan in place we will provide what details we can. No timeframe is currently confirmed for this but we would hope to provide an update within the next two weeks.”

Crux contacted ORC Manager for Environmental Services Martin King but he did not respond or return our calls. However, ORC Legal Counsel Peter Kelliher issued a statement saying “The Otago Regional Council is prosecuting Northlake Investments Limited and Civil Construction Limited in relation to the discharge of contaminants (silts and sediments) onto land in circumstances which resulted in those contaminants entering water, namely water in the Clutha River. The prosecution relates to discharges that took place on 17 and 18 August 2017. Both defendants have elected to plead not guilty to the charge.  The date for the trial has not been set.”

Read: How we are failing to learn strong lessons from other countries in managing our stormwater runoff.