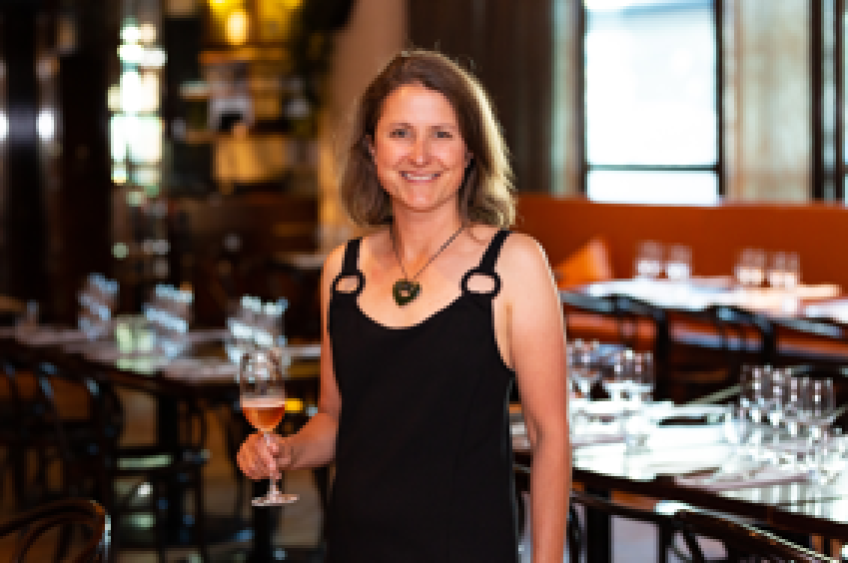 High profile Central Otago winemaker Jen Parr of Valli Vineyards has been named the 2020 New Zealand Winemaker of the year by Australasia’s leading wine magazine Gourmet Traveller WINE.  Parr who was one of six finalists for the prestigious title last year as well, received the award at a dinner at Auckland’s Grand Hotel Monday night (Jan 20). “Jen Parr couldn’t be more deserving of this award – especially as she is the only person to have been nominated as a finalist two years in a row. Her experience and attention to detail serve her well when creating wines of great quality and sense of place that are bound to delight any discerning wine lover” says Gourmet Traveller WINE editor Judy Sarris.  Winemakers cannot enter these awards themselves, nor can they be nominated by others. 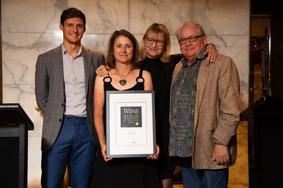 Jen Parr and the Valli team with their Winemaker of the Year award.

Born in Oregon but now living in Wanaka Parr has had a stellar career since moving to Central Otago as assistant winemaker at Olssen’s (now Terra Sancta) in Bannockburn where she became head winemaker in 2009.  She joined Valli in 2015 and is also a consultant winemaker for several other producers including Wild Earth, Kinross, Stewart Town Vineyard, and Black Quail. Parr says she owes her success to those around her: “While the Winemaker is the Year Awards is focused on individuals, none of us got here alone. We all have countless people who have helped us get where we are today.  I have had the privilege of working with some of the most talented Winemakers and Viticulturists in the business.  The Central Otago Wine Community has been a tremendous support to me and an integral part of my success. The competition that exists amongst us is of a healthy nature and serves purely as a motivation for us to work hard and not let each other down.”

She is an accomplished Wine Judge and is very active in the local wine industry, having served twice as the Chairperson for the Central Otago Pinot Noir Celebration. She was one of nine Mentors nationally in the Women in Wine's Pilot Mentor Programme in 2018 and has been very involved with the organisation of both the National and Central Otago Winemakers Workshops.

Valli Vineyards founder, pioneer winemaker Grant Taylor describes Jen Parr as: “The most thoughtful winemaker I know. We are a small team of three winemakers who just click.  I don’t think the Rolling Stones in their heyday worked together as well as we do. We share everything but perhaps nothing as much as our pride in each others’ successes”

The finalists for the Winemaker of the Year competition are chosen by a judging panel chaired by Bob Campbell MW, alongside industry stalwarts Cameron Douglas MS and Liz Wheadon. Ms. Wheadon is a new addition to the panel after the passing of Raymond Chan in 2019. Chan had a profound impact on the New Zealand wine industry throughout his life and shared a close relationship with Parr. In 2016, he named Valli Vineyards as his “New Zealand Winery of the Year”. His presence was missed at the awards dinner as Ms. Parr noted in her acceptance speech.

Other individuals recognised on the night were James Millton of Millton Vineyards in Gisborne who was awarded the Leadership Award and Jason Flowerday of Te Whare Ra Wines in Marlborough who received the Viticulturist award.

Jen Parr is no stranger to awards and recognition for her work. She has received countless gold medals and trophies for her wines including ‘Platinum Best in Show’ at the Decanter Asia Wine Awards and ‘Champion Wine of Show’ at the prestigious New Zealand International Wine Show. At the same show, she became the first person to receive the ‘Champion Winemaker Award’ in 2012. In 2018, she was awarded Winemaker of the Year as part of the NZ International Aromatics Competition.

Like many in the wine industry, her path to winemaking wasn’t a straight line. A native of Oregon, she graduated from Stanford University in California with a degree in English Literature. She then spent a few years in Software sales which moved her to London where her love for wine began to blossom.  She eventually quit her job and headed to Gaillac in the southwest of France to pick grapes.

She says she acquired her winemaking skills in the vineyard and winery rather than the classroom. “Aside from annual technical workshops and seminars, I took the old-fashioned route and learned by apprenticing. I debated going back to study wine in a classroom setting but I had just paid off the student loans for an expensive university (after nine years!) and instead decided to use my life’s savings to travel and learn from winemakers who inspired me. I worked three harvests a year for four years to expedite the learning process and had my sight set on living in NZ from the first time I came here in 2003.” While working in Gaillac, Parr made up her mind to work harvests in Australia, South Africa and New Zealand. It took 70 letters to land a job with Villa Maria in Marlborough. After Villa Maria, she worked two harvests at Craggy Range and one at Muddy Water before landing a job as assistant winemaker with Olssen’s in Central Otago, where the rest is history.

Valli Vineyards was founded in 1998 by pioneering winemaker Grant Taylor. Based around the estate vineyard in Gibbston, Valli produces single vineyard wines highlighting the different sub-regions of Otago. In 2015, Jen Parr joined Grant in the winery where the pair aims to create wines with honesty, integrity, and most importantly, a sense of place