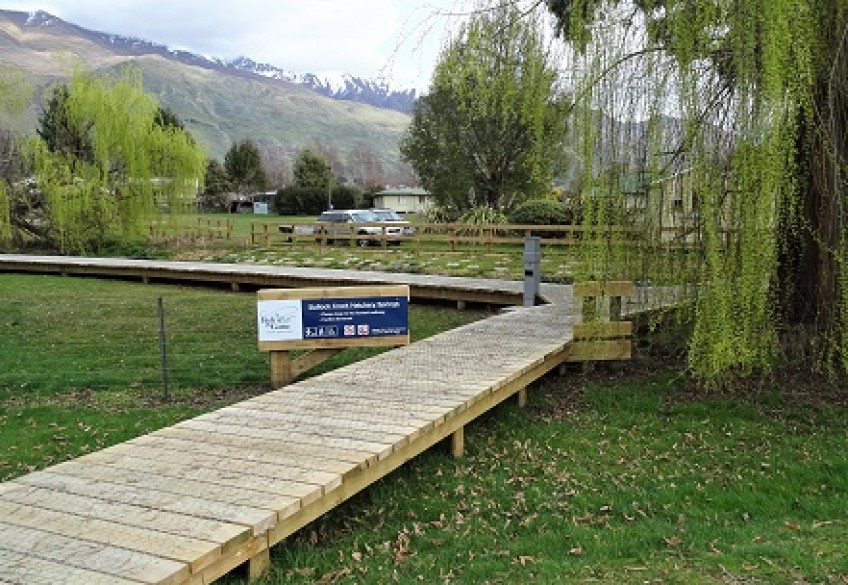 Wanaka’s Bullock Creek Hatchery Springs Walkway will open today, despite issues with stormwater runoff from a neighbouring subdivision still not being resolved.

The 340m-long and 1.5m-wide raised boardwalk through the Bullock Creek wetland between Stone St and the Alpha Series subdivision was to have been opened in early June.

But the opening was cancelled just days before the event, when sediment and silt spilled from the subdivision into the creek following heavy rain in May.

It was the seventh time in 18 months that stormwater from the subdivision had overflowed into Bullock Creek. 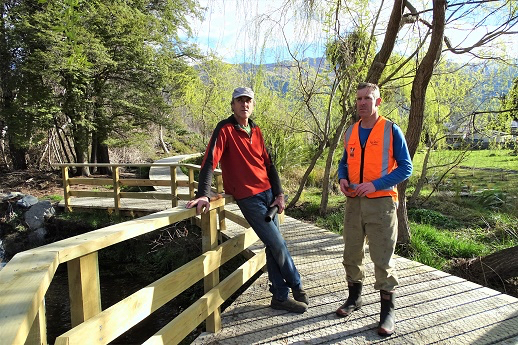 Wanaka Residents Association (WRA) president Roger Gardiner says the decision to postpone the opening was to allow a “bit more focus and attention on the problems that existed”.

The $100,000 boardwalk and restoration of the 2.5ha Fish and Game wetlands has been a major project for the WRA, the Otago Fish and Game Council, the Queenstown Lakes District Council (QLDC) and the Te Kakano Native Trust for the past two years.

Gardiner says discussions between the WRA, Fish and Game, QLDC and Alpha Series developer Allan Dippie are continuing, but “I don’t have a lot of confidence around a good outcome.

“In a way, we are just concentrating on this side of the boundary and keeping our fingers crossed that we don’t get stormwater coming through.”

Gardiner says subdivisions like the Alpha Series were consented when “they all just thought stormwater could disappear into the gravel, but that is not the case. 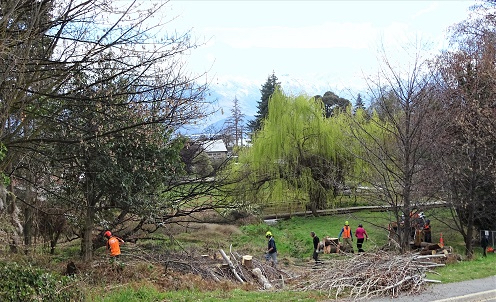 “Throughout Upper Clutha, subdivisions people are beginning to realise that stormwater is a real problem and I think we’ll see much better planning and processes for new subdivisions.”

The QLDC told Crux it met with Fish and Game and Alpha Series developer Allan Dippie on September 7 to discuss improvements to stormwater management at the development.

“QLDC has requested further testing and proof of compliance with resource consent conditions (for) the existing stormwater infrastructure (and) Allan Dippie has also proposed to investigate alternative infrastructure, to assist the existing infrastructure over and above its current design performance,” the council says.

Otago Fish and Game officer Paul van Klink is hopeful there won’t be any more “pollution events” in Bullock Creek, but concedes the reserve is now surrounded by urban development. 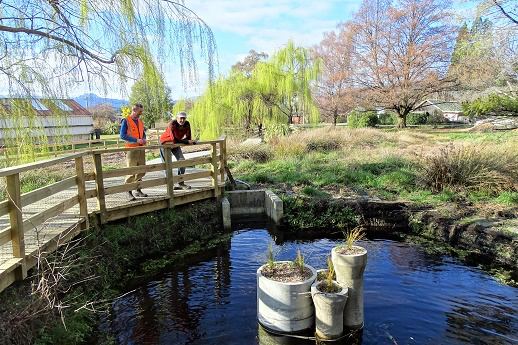 “It is acknowledged that urban stormwater goes into Bullock Creek now and it will continue to do so, but hopefully in these upper reaches we can keep it clean.”

It is almost two years since the restoration project began. In October 2016, Te Kakano held its first planting day and since then volunteers have spent 2500 hours clearing weeds and broom from the decommissioned Wanaka fish hatchery site and planting more than 1200 native species.

van Klink says it’s happened a lot faster than what he expected, helped by a regular team of people carrying out their Department of Corrections community service sentences at the site.

For Gardiner, one of the most exciting developments was the discovery of Punga Pond.

“When we started the project we didn’t know where it was, there was no water flowing through it. This was where the adult trout were kept and it would be a real highlight if we could reintroduce some trout there.”

Gardiner estimates it will take about 10 years to complete the restoration of the reserve but the work probably won’t be done by the WRA which he predicts will fold by the end of the year.

He is keen to facilitate the creation of a new organisation, the ‘Friends of Bullock Creek’, which would focus on the waterway from its headwaters to Lake Wanaka.

“Friends of Bullock Creek would be an organisation that would try to enhance, protect and maintain the water quality and educate the landowners along the banks of Bullock Creek who may not understand it is a trout spawning creek and what trout need.”

He says while landscaping the neighbouring property owners might have denuded the banks of vegetation and put rocks in. “They’d probably be interested to know that trout need to have overhanging plants and bushes.”

van Klink is excited the boardwalk is finally opening. “We had it screened off (with tape) but people helped themselves and pulled it down, kind of saying, come on, we want it opened.”

He says Fish and Game may dispose of its land north of the reserve to fund another hatchery, but that won’t affect access to the boardwalk. A public easement over the boardwalk is likely to be granted in the next few weeks. “So, it doesn’t matter what happens, this land will be public access.”

Gardiner is hopeful the reserve will become a special place for Wanaka residents and visitors. “What we want it to be is a place where people can enjoy walking through it, perhaps enjoy a bit of solitude sitting beside one of the creeks or waterfalls. Possibly if people on social media get to hear about it, it will become very popular and we’ll have to put a dotted line down the middle and say keep left.”