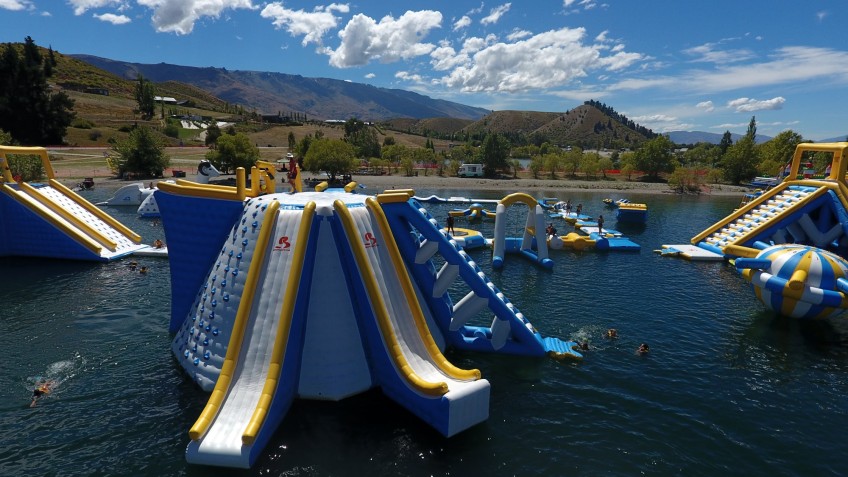 The owners of the Kiwi Water Park fear they won’t be able to open this summer due to what they’re calling “bureaucratic red tape”.

The inflatable floating playground, set up seasonally on Lake Dunstan at Lowburn, near Cromwell, is waiting for necessary go-ahead from Land Information New Zealand to operate again this year.

But Kiwi Water Park co-owner and marketing manager Emily Rutherford says her business is caught up in lengthy delays and indecision between LINZ, Waka Kotahi and the Central Otago District Council.

Her park shares public reserve space with boaties and freedom campers, and there’s calls for a right-hand turning lane off State Highway 6 to manage traffic heading in and out of the reserve, she says.

If the issue isn’t resolved by November 4, the park won’t have a license to legally operate this summer.

“We have been waiting for six months for a decision over whether we need to install a right turn bay into our park, or if the speed limit should be lowered instead, to legally operate – but no one will give us an answer,” Ms Rutherford says.

“In the meantime, our business planning and recruitment of staff for this season hangs in the balance – we’ve got two months till we open and we need action urgently.” 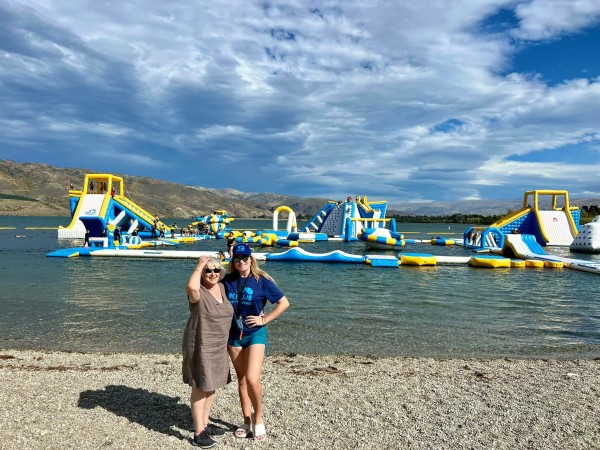 The owners of the Kiwi Water Park, mother and daughter duo Emily and Janet Rutherford, are in limbo as they wait to see if LINZ, Lake Dunstan's landlord, will grant them a recreation licence for the coming summer season.

LINZ head of Crown property Sonya Wikitera says LINZ is considering the water park’s application for the recreation permit needed to set up on the lake.

“We are working closely with Waka Kotahi and Central Otago District Council to assess whether risk mitigation measures may allow the water park to open again this year.

“We are doing our best to have an answer for the business owner as quickly as possible.”

LINZ has previously granted recreation permits allowing the water park to operate over the summer seasons for the last two years, she says.

“However, traffic safety concerns have slowed down processing the water park’s permit application for the 2022/23 season.

“The safety of all visitors, including freedom campers, to this popular recreation area is our top priority.”

A spokesperson for Waka Kotahi says the authority is waiting to see a design proposal from the water park operators for the right-turn bay and the necessary documentation for a contractor to carry out the work on the stretch of state highway.

The roading authority was not consulted when the CODC initially granted a consent for the water park, the spokesperson says.

During the first season of the water park’s operation, a serious crash occurred at the access point to the carpark used by the water park.

This resulted in Waka Kotahi having to step in and install temporary traffic management there for the remainder of the season, which it also had to fund, the spokesperson says.

“This included warning signage and cones to reduce speed past the site and regular checking and maintenance to ensure measures were in place and working safely each day.”

A variation to the water park’s consent when it shifted its location a few hundred metres in its second season introduced fresh obligations on the operator, including additional signage, fencing, and traffic monitoring and reporting, the spokesperson says.

“A traffic counter was installed at the accessway for the 21/22 season and the operator’s traffic consultant completed an assessment report following the completion of the summer season.

“The assessment report concluded that based on the volume of traffic accessing the site, a right turn bay was required to ensure safe and efficient access from the state highway.

“The conditions on the consent required the right turn bay to be installed by November 2022 in advance of the 22/23 season.

“All of the parties (Kiwi Water Park, CODC, LINZ and Waka Kotahi) met in June this year to discuss the conclusions of the traffic assessment.

“All agreed with the assessment conclusions but there was disagreement on who was responsible for funding the upgrade to the access required.

“If no agreement is reached on the access upgrade requirement process the consent conditions stipulate that the final decision sits with CODC as the consent authority.” 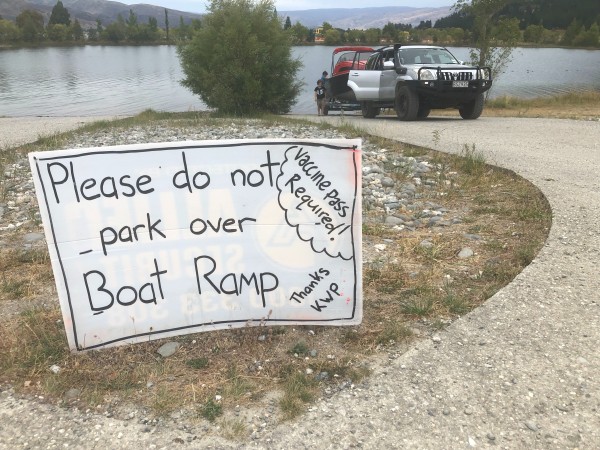 The CODC has received complaints from members of the public saying the Kiwi Water Park's signs, a condition of their resource consent, don't cut it.

The CODC has been approached for comment, but a spokesperson says a response to specific questions on the current debate won’t be available until early next week.

“What we can say at this stage is that Kiwi Water Park currently has a resource consent issued by Central Otago District Council enabling it to operate. It also requires a recreational permit from LINZ.”

Earlier, the CODC said it had received 23 formal complaints regarding the water park, some relating to the loss of a popular public swimming area, lack of community consultation and input regarding the park’s new location, boat ramp access and parking management, fencing, and road safety.

The water park set up shop in Lowburn in 2020. Last summer it had 30,000 customers, a 100 percent increase on the year before, Ms Rutherford says.

The water park was originally granted a six-year consent by the CODC to operate at the reserve in Lowburn.

Ms Rutherford says she left the meeting with stakeholders earlier this year, held at the conclusion of the water park's operating season, assuming things were good to go for another year.

Earlier this month Ms Rutherford says her mother and her wrote to Minister for Land Information Damien O’Connor in “desperation” that a decision be made.

“We were given a six-year consent to operate, so in good faith we’ve invested hundreds of thousands of dollars in equipment and infrastructure for the enjoyment of many. But in reality we’ve only been given two years."

The pair are happy to contribute towards some of the costs for the right turning bay, so long as they can be guaranteed a longer lease period, she says.

However, even if this was to go ahead, a turning bay would not be completed by the November deadline, she says.

They've suggested to Waka Kotahi a temporary lower speed limit in the area in the meantime – but it’s their view this suggestion has been "stonewalled" by the authorities.

“This whole process has been incredibly frustrating. Kiwi Water Park has received zero public funding and has been a success story out of Covid.

“We have received phenomenal support from the local community and thousands of people love the park.

“Living with the constant threats from LINZ, CODC and NZTA that they may shut us down is completely unfair.

“It’s now two months before we’re due to open and we should be busy recruiting locals for another summer season and contributing to the local economy.”