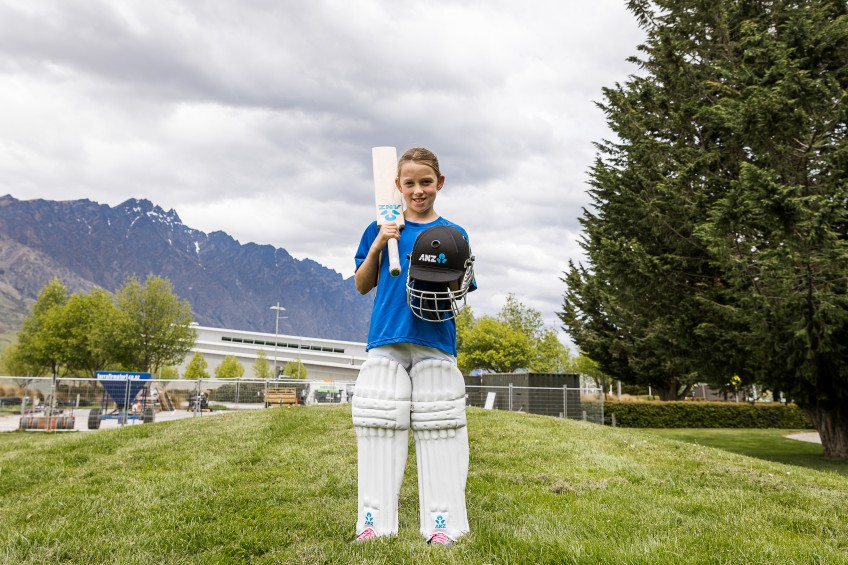 Queenstown cricketer 10-year-old Alexis Clement can play the game she loves after being awarded an ANZ Cricket Grant that subsidises the cost of her registration fees for the upcoming season. And, as an extra surprise to ensure she has a great season, Alexis was awarded a gear grant including bat, ball, pads, gloves and bag.

ANZ Cricket Grants makes a total $100,000 available to young cricketers who would benefit from the support of registration fee subsidies to help take the pressure off families and make sure kids didn’t miss out on cricket this summer. ANZ also surprised several lucky cricketers from around the country to be the recipients of a cricket gear pack to aid them in their dedication to training and the game.

Alexis, who plays for Queenstown Cricket Club, was excited to be awarded this ANZ Cricket Grant.

Alexis got into cricket because her dad kept watching it on television and then her brother started playing.

“We went to a few of his matches so I decided to play too and I started to really like it.”

“It’s really exciting and fun once you get used to it. I like to play with my friends and my team, I’ve met a lot of new people too.”

“They play backyard cricket and sometimes practice after school together. They tend to go down to the local park with the neighbours and play a game after school so they could use the new gear for that too.”

“In the last couple of years, we’ve had games played in Queenstown which is really cool. We’ve had a couple of international Black Caps games, and for the first time in years, we’ve had the super smash between Christmas and New Years. We had the White Ferns playing India over the summer. It was really cool to actually be able to see them play in person.”

This turned into more opportunities for young cricketers when White Ferns coach Emma Campbell set up a session for the local girls to train with Suzie Bates, Katie Martin and Kate Ebrahim, which Alexis was thrilled to attend.

“They taught us how to hold the ball correctly. They asked us a lot of questions and if we got it right we won a prize. Katie Martin did wicket keeping, and Kate taught the girls how to bowl and bat. It was one-on-one training,” she says.

Alexis says she loves the opportunity to see games live.

Last season, due to Covid, Alexis played with various mixed teams because there weren’t any set teams. This season she hopes to go back to an all girls team.

"Earlier this year, I found a cricket smash club where just girls play and train. Unfortunately it got cancelled because of Covid but hopefully it's back up and running this season.

Alexis hopes this resurgence will encourage more girls to get into cricket and she has some wise words of encouragement for girls thinking of joining a club.

“Just give it a go really. You don’t know if you like it until you try these things. It’s not a physical sport either, it's a team sport.”

ANZ Bank New Zealand CEO Antonia Watson says paying club fees is one of the first barriers families face when deciding if they can register their child to play.

“Sport is an essential part of a child’s wellbeing, so we’re pleased to be providing support to make sure Kiwi kids can keep playing the game they love.

“The increased cost of living can put families in a tough position when it comes to managing the household budget. We hope these grants will help to ease some of that pressure and keep more kids playing cricket.

We were so impressed by Alexis’ dedication to training, we hope this new gear helps her to reach her goal.”