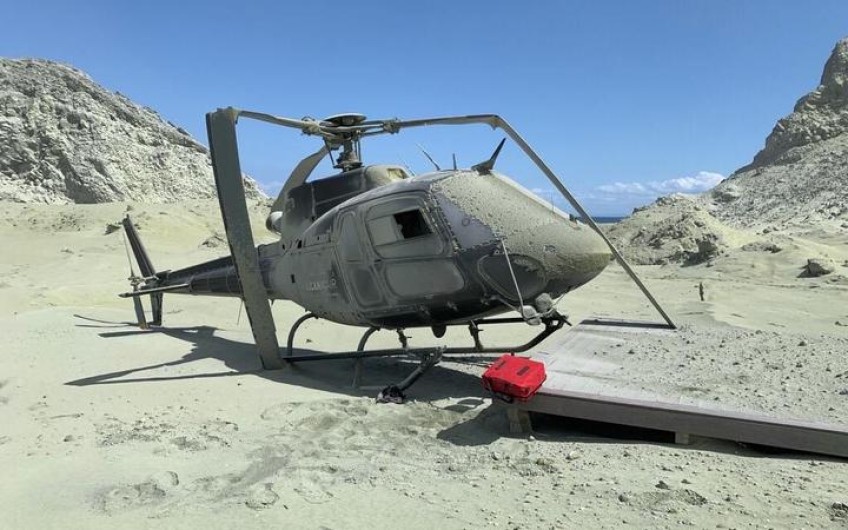 Whakaari / White Island rescue: 'Nothing can really prepare you for an eruption like this'

A group of tourists on a boat and private helicopters came to the rescue in the immediate aftermath of the White Island eruption yesterday afternoon.

Police do not believe there are any survivors on Whakaari / White Island, as eight people are confirmed missing after yesterday's eruption.

Waikato Police Superintendent Bruce Bird said eight people were missing; 47 people went on to the island, five are confirmed dead, 31 are in hospital and three have been discharged.

Prime Minister Jacinda Ardern praised the efforts of the local community in a press conference this morning.

Two private helicopters were able to land and rescue survivors along with a volcanic air helicopter. There was another helicopter in the vicinity that was unable to land.

One Westpac helicopter landed on the island and was able to transport survivors back to the mainland.

"In the immediate aftermath a number of helicopters made a deliberate decision to fly to rescue the survivors."

"I want to thank the courageous decision made by first responders and those pilots in their immediate rescue effort made an incredibly brave decision under extraordinarily dangerous circumstances in an attempt to get people out," Ms Ardern said.

"As a results of their efforts, a number of people were rescued from the island."

A tourist boat also travelled to the island and rescued people stranded on the jetty at White Island.

Tourists come to the aid in the rescue at White Island. Photo: AFP PHOTO / MICHAEL SCHADE

Passenger Michael Schade told the Guardian the skipper of the boat had put on speed to get away from the volcano, but after the smoke cleared they could see a crowd of people and decided to return.

He said some of the tourists were screaming and others were in shock.

"Some people had pockets of burns, other people were fine, and others were really rough," he told the Guardian.

Halfway back to mainland, a coastguard vessel met the boat and paramedics came on board.

A Hamilton man who was visiting Whakaari / White Island said his tour group used water bottles and any containers they could find to pour water on those severely burned after the eruption.

Geoff Hopkins was visiting the volcanic island with his daughter yesterday - their boat had finished its tour and was just heading back to Whakatāne when the eruption happened.

He said they turned around and helped pick up another group who were huddled on the shore.

Mr Hopkins said the passengers and crew poured fresh water on those who had been on the island, many of whom were badly burned.

"We just started to treat burns, we had a lot of fresh water on board so we were able to use fresh water.

"We just called out for any containers that we could use and we got people to start filling them up.

"Just started to pour cool, fresh water over people's burns. The more critical ones we needed to remove clothing and wrap them up," Mr Hopkins said.

A family of five volunteer firefighters say nothing could have prepared them for the chaotic scene of helping those injured off rescue boats yesterday afternoon.

Chris Hands said he and his family were at the Whakatane boat ramp within 40 minutes of the first eruption.

"It was something like out of a movie...it was surreal," he said.

Their job was to help transport those injured off the boats.

Mr Hands said some of them had horrific injuries.

"You can do as much training as you want, but it still doesn't train you for those situations. I think we got the base right and things don't always go how you want or how you plan it, but generally everybody got stuck in and did their job and people got treated when they needed to be treated," he said.

Karakia a prelude to ship's departure from Tauranga

A karakia will be held for passengers on board a cruise which included people involved in the White Island eruption.

Local iwi Ngāti Te Rangi will perform the karakia at 4pm as the cruise ship Ovation of the Seas departs Tauranga.

The karakia will take place inside the Port of Tauranga gates before the ship departs after 6pm.

Tauranga mayor Tenby Powell also asked locals to gather at the port to show their support for those affected.

The ship was due to leave port before the captain announced guests and crew from the boat were on a tour to White Island when it erupted.

Westpac Rescue Helicopter senior pilot James Taylor said two helicopters joined the rescue operation yesterday and a third was used to transport blood from the Auckland blood bank down to Whakatāne and was later used to move patients between hospitals.

He said the biggest concern was whether it was a one-off event or there would be another eruption.

"The crews planned quite carefully where they thought the safest place on the island was, as far away from the crater as possible and upwind of any ash or debris," he told Nine to Noon.

"They had to consider it quite carefully to balance the risk to the crews and helicopters against the benefit of helping any potential casualties," Mr Taylor said.

Mr Taylor said that from his understanding, it was a tourist boat that provided the first assistance to the survivors on the island.

Phil van Dusschoten from Diveworks Charters Fishing and Diving, who has extensive experience of White Island and the tourism there, said the entire community moved to provide assistance where they could.

A picture taken on White Island by search and rescue teams after it erupted on 9 December. Photo: Auckland Rescue Helicopter Trust

"Nothing can really prepare you for a significant steam eruption like this, but I think the training to all those involved and the attempts to assist and recover people and get them medical assistance as soon as possible, the community really banded together," he told Nine to Noon.

Ms Ardern said there were two groups on the island - those who were able to be evacuated and those close to the eruption.

Among those injured or missing are people from Australia, US, UK, China, Malaysia, as well as New Zealand.