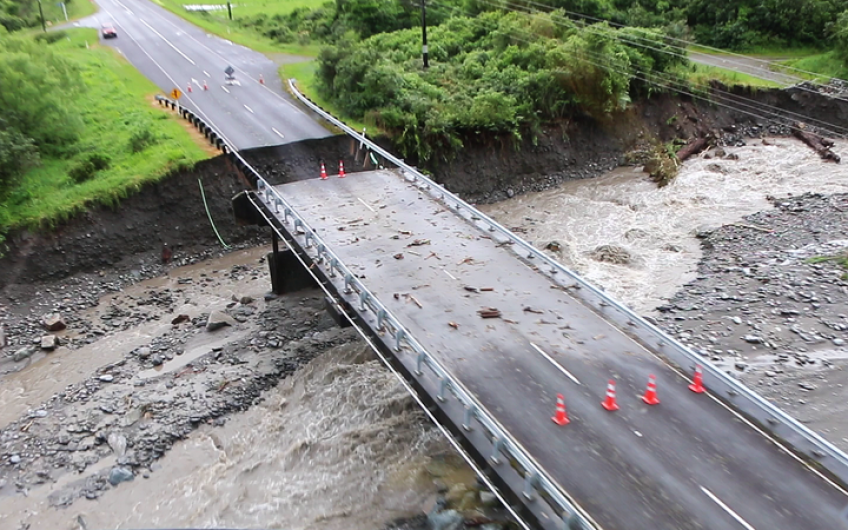 Nearly 1000 tourists are stranded in Franz Josef and they could remain there until Friday, while in Timaru District the council says it could take weeks to recover from flood damage.

Townships on the West Coast including Franz Josef and Fox are cut off as washouts and slips blocked State Highway 6, and on the other side of the South Island the flood-damaged Rangitata Bridge on SH1 and the bridge at Arundel on SH72 are closed.

Timaru District Council duty controller Justin Bagust said road crews had been working through the night and the bridges will being inspected this morning to check when they may be able to reopen.

"It's the second largest time that we've ever had this much water come down the Rangitata in 40 years, so there is as much water in the river as there is out of the river, so quite extensive break-outs and flooding alongside of that south branch."

The council is expected to give an update about 8am.

Timaru District remains under a state of emergency which will not be lifted until at least one of the bridges reopens.

The earliest most of the 970 tourists trapped in Franz Josef are getting out is Friday. Photo: RNZ / Conan Young

Slips and wash-outs south and north of Franz Josef mean the only way in or out is by helicopter.

Forty-four dairy farms just north of Franz Josef at Whataroa are also cut off and will start dumping milk today because no tankers have been able to get through since Friday.

Civil defence co-ordinator in Franz Josef, Wayne Costello, said the best hope of reconnecting Whataroa and Franz Josef with the rest of the country is to repair the road to the south, something road crews are hoping to get done by Friday.

In the meantime he said it was a case of flying in enough food for those who are trapped in the town.

Meanwhile, a portion of a slip hit West Coast highway could be reopened after authorities assess it this morning.

State Highway 6 from Hokitika to Franz Josef has been closed since Saturday, following a large slip at Mount Hercules south of Harihari.

But further south, the highway from Harihari and Mount Hercules is likely to be closed until at least Friday, Ms Hibbs said.

She said contractors have had better luck assessing the road north of Harihari, and as a result have no updates on the situation at Mount Hercules itself which is south of the town.

Meanwhile a generator is due to arrive in Fox Glacier by midday today where power has been out since Saturday.

A convoy of about 400 tourists was led out of the town yesterday.

Civil Defence Minister Peeni Henare and the Director of Civil Defence Sarah Black-Stuart will be on the West Coast today assessing the impact of the slips.

He said the Ministry of Foreign Affairs is supporting foreign tourists stranded by the slips.

In the North Island, Hayward's Hill Road (SH5) in Wellington is open again after flooding cleared.

Weather clearing but wet weekend ahead

NIWA meteorologist Chris Brandolino told Morning Report the Indian Ocean Dipole (or the Indian Niño) had been an influence for stronger westerly flows through the West Coast.

Well over a metre of rain has fallen over the region in the past eight days, he said.

"Even the lower elevations, Milford Sound [there's been] 608mm of rain ... they normally get 700 in the entire month of December. When you're getting 80 or 90 percent of your monthly rainfall in seven or eight days, that causes problems."

While skies are beginning to clear over Timaru today, more active weather could be expected again towards the end of the week and most likely the weekend, potentially with heavy rain, and across the upper South Island.

Main Image: A washed out bridge near Mt Hercules on SH6 on the West Coast. Photo: RNZ / Conan Young