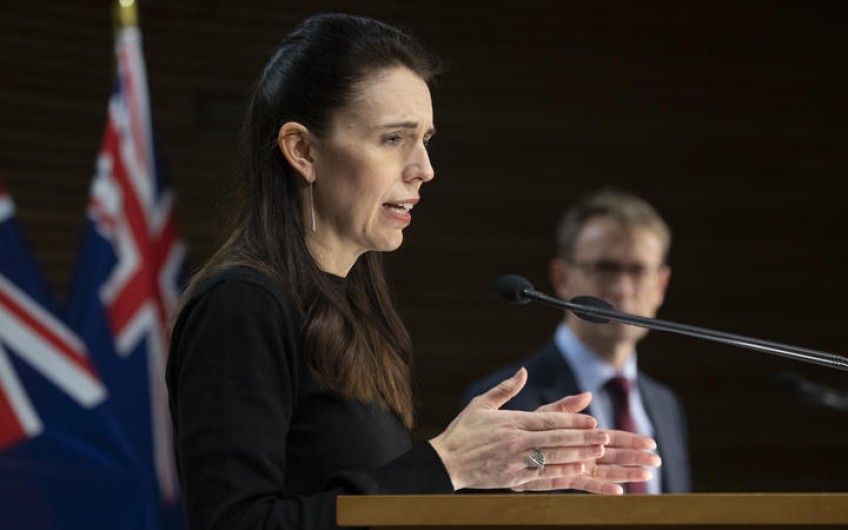 Prime Minister Jacinda Ardern has confirmed that the whole of New Zealand will move into the red light Covid-19 setting at midnight tonight.

The nine cases in Nelson yesterday have been confirmed as the Omicron variant, Ardern said.

Another household member has since tested positive.

They are one family and recently attended a wedding and there is now clear link to the border.

They were on the same flight as an Air New Zealand flight attendant who tested positive.

"That means Omicron is now circulating in Auckland and possibly the Nelson-Marlborough region, if not elsewhere," Ardern said.

Ardern said the focus is on slowing the spread of the Omicron variant and the strategy includes rapid tests, contact tracing and isolating cases and contacts.

New Zealand has system has "significant capacity" to work on stamping out outbreaks due to low case numbers, she said.

"We know we will see far more cases than we have in the two years to date, but the difference to previous outbreaks is we are vaccinated and we are better prepared."

Ardern said it will take a team effort and she's encouraging people to get their booster shots.

Ardern encouraged New Zealanders to get their boosters saying it will help limit the spread and limit the likelihood of someone getting sick or needing to go to hospital.

She also encouraged parents and caregivers to seek out information about vaccines for their children.

Already, 20 percent of children aged 5-11 have been vaccinated or are booked to receive their vaccination.

Ardern is reminding people the red light settings is not a lockdown.

She said it has restrictions, but business is still open, gathering numbers are reduced and differ depending on whether people are vaccinated or not.

Hospitality is seated and requires a single server.

She said schools remain open, with mask wearing for everyone from year 4 upwards.

Ardern encouraged households to have a "buddy" to help with food, for example, if someone in your household is unwell from Covid-19.

The government has been preparing for three stages in its response to Omicron, Ardern said.

Phase one includes the period up to 1000 cases a day or less. This is expected to take up to 14 days to arrive, and involves a "stamping-out approach", she said. That includes contact tracing, isolation and testing anyone with symptoms at a community testing station or primary health provider. PCR tests will be used, but rapid antigen tests will also be rolled out to these providers.

In stage one you will need to isolate for 14 days if you are a case or a contact, Ardern said.

She said stage two is a transition stage where the system is adjusted to identifying those at greater risk of Omicron and where there is the greatest risk of severe illness from Omicron.

Ardern said New Zealand is not likely to enter stage three for a few weeks and in this stage there will be changes to contact tracing.

It will include the definition of contacts and isolation requirements and more details will be provided on Wednesday, she said.

"It's important to remember Covid is a different foe to what it was at the beginning."

Because of vaccinations, it will be a mild to moderate illness which can be managed at home, she said.

But she said the "team" still needs to do what it can to slow it down, as some people are immuno-compromised and more vulnerable to the virus.

Director-General of Health Ashley Bloomfield said anyone with symptoms should get tested for Covid-19.

He said the risk of undetected transmission of the Omicron variant in Auckland is considered high, because the Nelson family that's tested positive spent time at a wedding there.

New locations of interest will be listed on the Ministry of Health's website.

Contacts who have been at a location of interest are legally required to isolate and get tested as per Section 70, Bloomfield said.

The risk of undetected transmission is judged as being high, as it is unclear how they became infected and they attended a wedding, he said.

As of 11pm last night, 150 of 192 people on the Air New Zealand flights have been contacted by health officials.

Attendees at the wedding have attended other venues with high numbers of people, including a funeral, an amusement park, the Sky Tower and domestic airports.

It is expected the number of cases and contacts will grow, Bloomfield said.

The government's approach to Omicron has come under flak with microbiologist Siouxsie Wiles warning the red traffic light setting will not be enough to slow the variant down and South Auckland GP Dr Api Talemaitoga saying the government had dropped the ball on rapid antigen tests.

New Zealand has been preparing for the arrival of Omicron in the community with doctors preparing to support people isolating with the virus at home and supermarkets starting to stockpile to meet demand.

The World Health Organisation has said although the Omicron variant appears to lead to fewer hospitalisations than the Delta variant and to be less severe in the elderly and very young, it should not be considered to be mild.