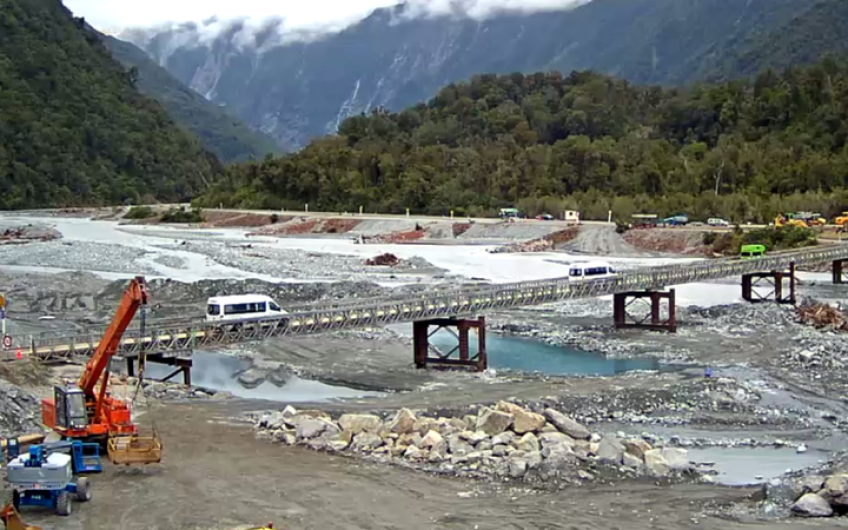 Waiho Bridge reopens after being rebuilt in 18 days

The Waiho Bridge near Franz Josef reopened at midday after being out of action for two and a half weeks when the old bridge was washed away in flooding.

A long queue of cars has started to cross the new bridge which the Transport Agency built in 18 days.

Cars started driving across the bridge at 12pm and about 300 of them had already queued up on either side awaiting the signal.

A Māori blessing took place as part of a ceremony this morning and the crowd were then allowed to walk across the bridge, which is just south of Franz Josef.

Westland District Council mayor Bruce Smith said thousands of people gathered to watch the opening and walk across the bridge and locals are delighted to have bridge access again.

"The tourism sector, which is a big part of our economy it's equal to dairy, it's been really impacted, but the door's open, the bridge is open and there is a row of cars that I can see which stretches from here all the way through the Franz community."

Mr Smith said he could not be happier.

"It's a huge day for Fox friends, for Haast, for Hokitika, I tell you what, everyone is smiling, this is amazing."

West Coast MP Damien O'Connor tweeted his thanks to the Transport Agency, Defence Force and "a patient community".

The reopening of Waiho Bridge has restored direct road access between Franz Josef and Fox Glacier on State Highway 6.

However, the Transport Agency has warned that people should be prepared for a slightly slower journey for the next few weeks.

That is because there is still some work to do on the bridge such as sealing the approaches and reinstating the guard-rail and the pedestrian walkway which will involve closures of up to an hour, it said.