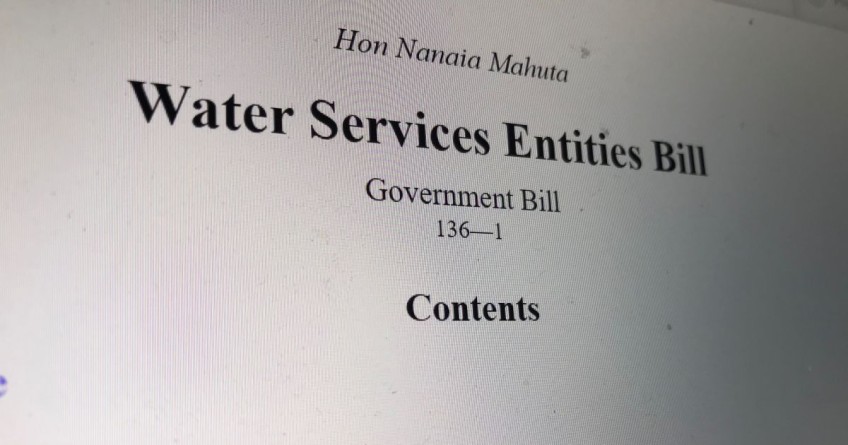 The government has agreed to make changes to its Three Waters reforms following recommendations from a Select Committee.

The reforms - which aim to put New Zealand's drinking water, wastewater and stormwater into four regional entities - have been highly controversial, with councils claiming they will lose control.

But the cross-party Finance and Expenditure Committee's report has recommended that a mix of rural, provincial, and metropolitan councils now be present on the regional groups.

The entities will also have annual shareholders' meetings, and there will also be stronger accountability measures and increased audit scrutiny.

Improved accountability measures will also be baked into the legislation, including strengthened reporting lines and obligations and increased audit scrutiny.

The co-governance aspect of the bill, however, has been retained. Under the legislation, territorial authorities and mana whenua would have equal representation managing the entities.

The Select Committee received more than 80,000 submissions on the bill.

"They improve local voice, strengthen representation, and increase transparency. They will also provide certainty to councils and those working in the water services sector about the future of our critical infrastructure.

"We heard from rural councils who felt their voices would be drowned out by larger urban centres. At their request, the Bill now includes a provision which requires a mix of rural, provincial and metropolitan councils to be present on the regional representative group.

"We will also require the entities to establish an annual shareholders' meeting. In the interests of transparency, we are also requiring these meetings and entity board meetings to be held in public. This level of public reporting will give communities greater visibility of infrastructure investment that supports broader wellbeing."

She said Internal Affairs officials had also worked with the Auditor-General to improve accountability measures in the legislation, including strengthened reporting lines and obligations and increased audit scrutiny.

Mahuta told RNZ putting provincial, metro and rural voices on the regional representative group would "go some way to giving an assurance ... everybody and their interests within their communities are important as decisions are made".

"What we do have in front of us right now is a solution that is affordable for ratepayers now and going forward and into the future and at time where cost of living is a huge challenge for households. These solutions that we have in front of us help ... a difficult challenge that the councils, quite frankly, haven't been able to deal with in the last 20 years."

As for co-governance, Mahuta said opposition to it was a "rallying call for other types of sentiment".

"I think that's a good thing for all New Zealanders no matter where they live."

Asked if there were any select committee recommendations the government would not progress with, Mahuta said: "we will fully consider all recommendations. On the surface of it they all look like they are improving the workability of the bill and responding to the concerns of the submitters, so I really welcome the report and over the weekend I will work my way through each of the recommendations".

"It shows that Jacinda Ardern and Nanaia Mahuta's promise of consideration and dialogue with mayors and local communities about the alternatives is just talk."

Asked if he agreed with any of the recommendations, he said "in principle we do not support (the bill)".

National would repeal the bill if it was elected to government in 2023.

Asked if he was surprised the statement on the changes did not mention co-governance, Watts said he was.

"That's because when you travel around the country there is significant concern and opposition in regards to the governance model that has been proposed."

National understood the second reading of the bill would be next week, Watts said.

"For a start, the Green Party wants to see seven not four entities and local councils having greater oversight of the entities. This would ensure community voices are at the decision making table and enable better alignment with regional spatial strategies under the proposed Spatial Planning Act," said the Greens' Three Waters spokesperson Eugenie Sage.

She also preferred a Two Waters model such as Auckland's Watercare, with stormwater remaining under council control.

ACT has long argued it would repeal the reforms should it get into government, and said the bill had nothing about how infrastructure would be paid for, who would pay, and how much.

Local Government New Zealand said it would be analysing the government's changes to the Three Waters reforms, following recommendations from a Select Committee.

The organisation was among the submittors and president Stuart Crosby said a number of councils wanted to see fundamental changes to the proposed model.

It was disappointing that, at a first glance, it looked like councils still had little flexibility on stormwater, he said.