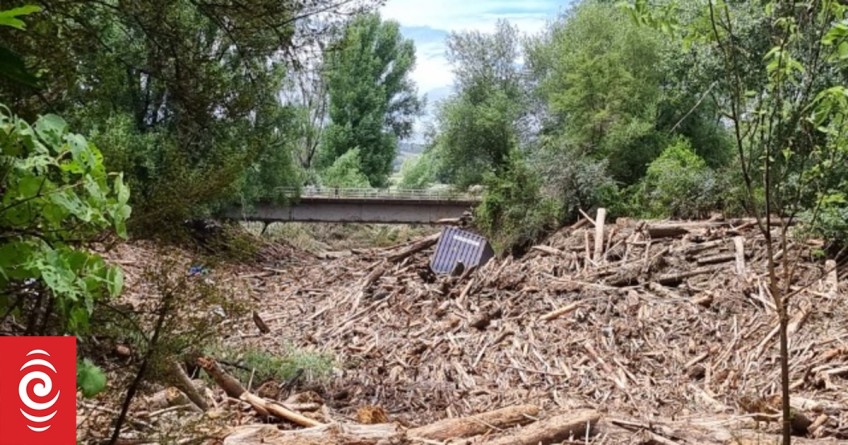 'Our whole property was underwater' - Damage after logs block river

A Tairāwhiti resident says her home would not have flooded if it wasn't for a sea of logs that blocked a nearby river during heavy rain.

The region has been battered by heavy rain as cyclone Hale passed down the country, and was put in a state of emergency on Tuesday evening.

Linda Gough, who lives inland in Tolaga Bay next to the Mangatokerau River, says she was keeping an eye on the banks on Tuesday evening as the rain was pelting down.

At about 9.30pm it was high tide, and Gough said the river banks looked high, but not like they were going to breach. She felt at ease.

But then, logs started drifting downstream.

"Within that hour, our whole property was underwater. Water was coming up the stairs, running underneath [the house], it killed off all our power, all the freezers, fridges," Gough said.

Come Wednesday there was a sea of logs and debris where the river used to be and destruction to her entire property.

"We can't get out our driveway, our fences are gone, the gate's gone, there's not a paddock left - everything is covered in silt and logs ... it's just not fair and it wouldn't happened if it wasn't for the logs," she said.

The logs - called slash - are the waste products from forestry operations and are an ongoing problem for the East Coast.

There are forestry works up the valley from Gough's home, and she was furious the debris had blocked the river and risked their safety. Especially because it's not the first time this has happened.

Gough said in 2018 the almost exact event played out when Cyclone Cook hit the coast.

"We lost absolutely everything," Gough said, but she noticed this time there seemed to be more logs.

From the damage in 2018, Gough said they were approached by a lawyer from one of the forestry companies to cover costs of the damage.

"Their lawyer sat at the bottom of our staircase, saying he was coming to talk about fixing us up for what we'd lost... I said no we'll just go to court because that's ridiculous ... and he says 'oh well you can do that, but we've got unlimited funds and we'll just keep going' ... they know we can't fight them," Gough said.

Gough said the company took off costs for things like already clearing the logs and the damaged fences and they didn't end up with "basically nothing" in hand.

That year, an estimated one million tonnes of logs and debris were strewn on properties and roads in Tolaga Bay.

Hikurangi Forest Farms, which has now changed its name to Aratu Forests, Ernslaw One and PF Olsen were among 10 companies charged by the Gisborne District Council in 2019 with breaching their resource consent conditions for the slash debris.

'All that can be done, has been done'

The Forest Owners Association says companies are trying to address the problem of forestry slash damaging neighbouring properties in storms.

Association president Grant Dodson told Morning Report companies did not want this to happen, but there was no easy solution.

"The issue here ultimately comes down to the fact that these are highly erodible catchments and forestry was put in these catchments 30 to 40 years ago to try and stabilise them but they're still eroding."

Forests are valuable assets and no one wants to see them washing down rivers, he said.

"But when you get an extreme weather event like this, sometimes that resilience gets overwhelmed."

There were manuals on best practice which advised people to building forestry roading networks as resilient as possible, to recover wood off the cutover and put it into a place that it won't wash away, he said.

"All that can be done, has been done," he said.

Companies charged by Gisborne District Council in 2019 have put in a lot of effort to try and improve their practice, he said.