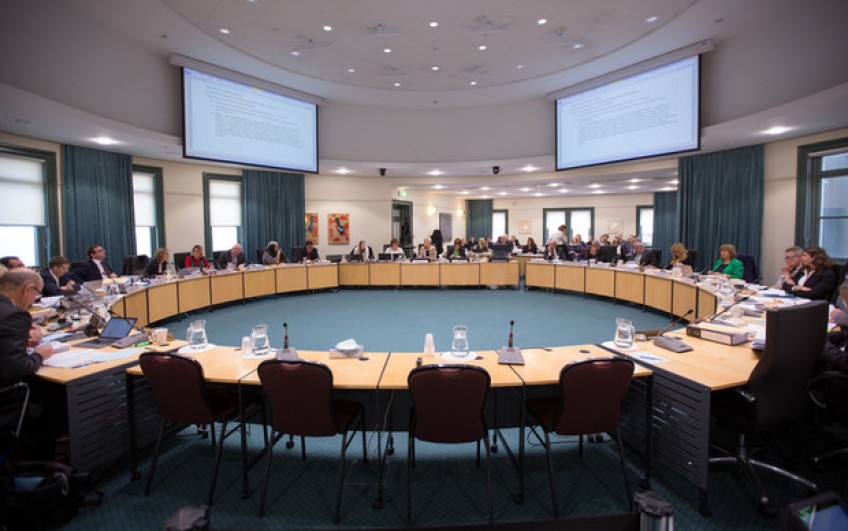 Last week, Local Democracy Reporting revealed a Rotorua man has complained to the Office of the Ombudsman about Rotorua Lakes Council's refusal to provide detailed information on the content of its public-excluded workshops.

A constitutional law expert says it is a "troubling black hole" in the transparency of local government, while a leader in the sector suggests change may be on the horizon.

Local Democracy Reporter Felix Desmarais asks: how much is the public missing out on in secret council workshops?

Victoria University of Wellington associate professor of law Dean Knight loves coffee. He can often be found in the capital's coffee shops wading through intricate issues of constitutional law.

When I call him from Rotorua, he's two double-shots into the day and his mind is sharp - or perhaps it's that Knight has been thinking about local government's issues with transparency for a while.

"It's a known and troubling black hole in the transparency framework," he says, almost before I can ask the question.

The law has established a "really good regime" around meetings, he says, "making sure they are done transparently and so the public can engage in them".

Workshops are in a kind of no man's land for local government law.

"Deliberative committees are where the action is and we should not put the spurious label of a 'workshop' on it to avoid the public gaze."

He says the issue is widespread.

"[Local Government Minister Nanaia] Mahuta should be really concerned by this."

Because formal decisions aren't made in them, the public doesn't have the same access rights as they do for most official meetings. However, they're still a place where direction, debate and discussion that informs formal decisions can take place.

"The problem comes because those workshops have been almost made systemic. Rather than being the exception, they have become the rule."

It is "raw and naked debate" that gives democracy its legitimacy, he says. If members of the public see the full process, they are more likely to tolerate a decision.

"Hiding in the shadows ... is problematic. It's not the ethos of local democracy."

Reputations and trustworthiness on the line

But maybe that "raw and naked debate" is a little too raw and little too naked for those in the business of organisational reputation risk management?

"The justice system is based on open justice. That means justice is not only done but is to be seen to be done. The same is true with democracy. The default should be that it's an open forum unless there is a good reason for it not to be."

Dr Galloway speaks slowly and clearly, with careful thought between each sentence.

Reputations are "built on perceptions of trustworthiness", he says.

Doing things behind closed doors, justified or not, can have a negative impact on the perception of councils, he says.

Poetically, Kāpiti District councillor Gwynn Compton is in a closed-door briefing when I message him, via Twitter, asking if he's free to chat.

In November last year, Compton called for a Royal Commission of Inquiry on local government that would represent a wholesale reassessment of how the sector worked.

Talking to Local Democracy Reporting this week, Compton said closed-door workshops "fuel a sense of distrust and scepticism" among the public.

"The whole idea of local democracy is that you have difficult discussions in public.

"There's a bit of a fear in the sector, they're afraid about local democracy looking a bit messy."

People needed to see the "journey" it takes for elected representatives to arrive at a decision, he said.

"There's meant to be that tension between opposing points of view."

The former banker and public relations professional said the Royal Commission could include a rethink of the Local Government Official Information and Meetings Act 1987 (LGOIMA).

He said the Act had to be more specific, as there were varying interpretations of it among councils, and to ensure "the whole decision-making process gets played out in public".

A lawyer by trade, the first-term councillor says closed-door meetings have been "a bit of a hobby horse" since he entered office in 2019. He's almost breathlessly keen to talk about it.

"It really has struck me how many really important, substantive directions occur behind closed doors."

Jennings says, in his view, the discussion that goes on in confidential workshops results in council meetings that are "very vanilla" and just a rubber-stamping process.

He says workshops should be, by default, open to the public, and closed only when there is a "good reason" - such as the provisions for excluding the public that apply to some parts of formal meetings.

Another troubling aspect of closed-door workshops is lack of a formal record of the directions elected members give to staff, he says.

He says some might argue there is a "chilling effect" on free and frank discussion if it is held in public, but Jennings does not buy that.

"If you're elected to public office, you've got to be accountable for your decisions and your comments. It doesn't mean you can't change your position down the track."

He says in his opinion there is a tendency in public bodies in New Zealand to not trust the public and seek to "control the flow of information".

That culture means people have to ask for information, rather than organisations proactively releasing it, he says.

"We don't trust [the public] to understand information. I honestly think that's wrong."

He says he has heard conversations in various settings where public officials or elected members would suggest not having conversations in writing because of the risk of official information requests.

He says LGOIMA reform would be "a good place to start" but he prefers Compton's idea of a Royal Commission.

"We need to start from a big picture review. Some stuff's got to change, eh?"

Local Government Minister Nanaia Mahuta, through a statement, says she expects councils to "know and respect" their transparency and accountability obligations under the LGOIMA.

She says a decision to exclude the public from a council meeting is a "serious decision" and she expects councils to carefully consider the public interest in hearing a debate on an issue before moving into a public-excluded session.

"In general, I believe that councils ... understand the importance of maintaining transparency and open debate in their communities."

Questions about Mahuta's views on local government reform were not responded to in time for the deadline.

However, in November last year, she told a South Auckland-based Local Democracy Reporter there were major issues to be looked at in the sector, and it "could be due for modernisation", which would include local government law.

National Party Local Government spokesman Christopher Luxon says in a statement it's vital councils are accountable to their communities.

"There may be times where closed-door workshops are appropriate, including when councils need to receive commercially sensitive information.

"However, council decision-making should always be as public and transparent as possible."

"As a first principle, they should be open to the public," he says.

"If workshops are closed to the public, there could be a public perception that councils are hiding something - and in my experience, they're actually not."

Informal meetings are valuable as a place for discussion, but "confidentiality should be limited, as it is for a full council meeting".

He says the same rules for moving into public-excluded sessions should apply to informal meetings as well.

Echoing a similar comment from Jennings, Crosby, the former mayor of Tauranga, says he does not buy the argument that confidentiality fosters "full and frank conversations".

"If you want to say something you should be able to say it freely in the public arena."

He says there will be an announcement in April about a review into local government, which would investigate its guiding legislation and the provision of "sustainable funding streams".

Crosby says issues such as confidential workshops and how they are covered by the LGOIMA are likely to be traversed by that review.

April's announcement will cover the process and timeline of the review, as well as "who's involved", Crosby says.

In a statement through the council communications team, Rotorua mayor Steve Chadwick says workshops contribute to an in-depth understanding of issues that enable elected representatives to be effective.

"That is part of our democratic responsibility as elected representatives.

"Elected members represent the community in many different ways, including in workshops where the likes of long-term plans and the direction these should take and issues they should address are discussed.

"What emerges from these workshops, including information and direction that was provided, becomes public via formal meetings where proposals are presented and decisions are made following further discussion and debate."

Transparency is "absolutely important," she says.

"In recent years the council has introduced many additional ways for people to stay up to date and engage with council work and decision-making."

"How elected members will work together and conduct themselves in their roles as representatives of the community - which includes how workshops will be conducted - is agreed by them following elections and becomes public in the form of a governance statement and code of conduct. I'm happy with that process."

Rotorua Lakes Council corporate planning and governance manager Oonagh Hopkins says the council has made a concerted effort to increase the amount of information and communication that goes out to the community."

That includes livestreaming official meetings, a weekly newsletter, a quarterly magazine, and publishing information requests on the council website.

The council has also stepped up partnership and engagement efforts, she says.

Local Democracy Reporting requested figures from 31 councils across the country on how many workshops they held in 2018, 2019 and 2020.

LDR also asked those councils how many of those workshops were not open to the public.

While councils variously called them workshops, forums or briefings, all were meetings where no formal decisions were made.

Hamilton City Council was the only council among the 31 which opened 100 percent of its workshops to the public.

Most councils - 23 - held all workshops over the three years in public-excluded.

In the Bay of Plenty

Rotorua Lakes Council held all of its 37 workshops in public-excluded.

Tauranga City Council held 55 workshops in public out of 62.

The Bay of Plenty Regional Council held two workshops out of 39 in public.

The Western Bay of Plenty District Council held all of its 90 workshops in public-excluded.