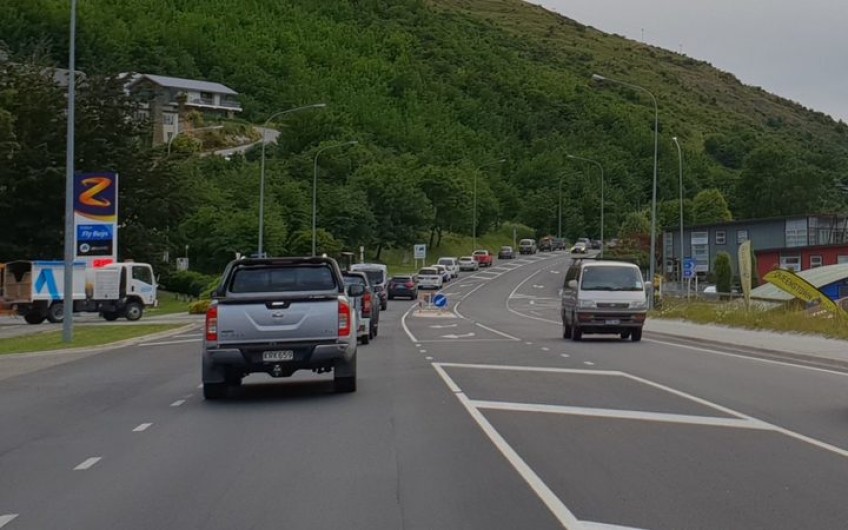 Queenstown residents fed up with traffic woes: 'It's ridiculous'

Motorists around Queenstown are facing increasing traffic delays with some saying it can take 50 minutes to drive less than 20 kilometres.

Fingers have been pointed at road works along State Highway 6, growing subdivisions and increasing visitor numbers as the potential causes.

Driving along the highway in peak hour traffic, half of the road was almost at a standstill or crawling.

The other half appears to be flowing along at the speed limit - 80 kilometres an hour.

"The worst morning I've struck so far, it took me 50 minutes from Lakes Hayes into the council offices. But I've learnt my lesson and I leave at 7am in the morning now," Mr Boult said.

"Thirty seven years ago, it used to take me 12 minutes.

The stretch is undergoing road works at Tucker Beach and Quail Rise Intersection.

They were scheduled to be finished by mid-December but the Transport Authority has pushed the finish date back to April or May next year.

"It's ridiculous ... it's just something you have to put up with," Ms Climo said.

Waiting times and congestion have been blamed on the roadworks, but she said the finger should be pointed elsewhere.

"It's all the traffic coming from all avenues like Cromwell and Alex (Alexandra), it's from everywhere. It's not just the Tucker Beach road works I don't think," she said.

Mr Boult said the council had pushed for improvements and now the ball was in the Transport Authority's court.

"I just get very frustrated over how long it takes to come to these decisions," Mr Boult said.

A working group between the Transport Authority, Queenstown Lakes District Council and Otago Regional Council is looking into solutions and is expecting to meet again in the new year.

But he said adding more lanes to the Shotover Bridge or creating a new bridge was not feasible.

"The basic problem is there's primarily one route in and out, there's only so many vehicles per hour and if people are travelling one person typically per vehicle in the peak hours then congestion is simply not going to go away," Mr Harland said.

The State Highway 6 roadworks will wind down next week with a speed restrictions of 50 kilometres per hour in place before starting up again in early January.