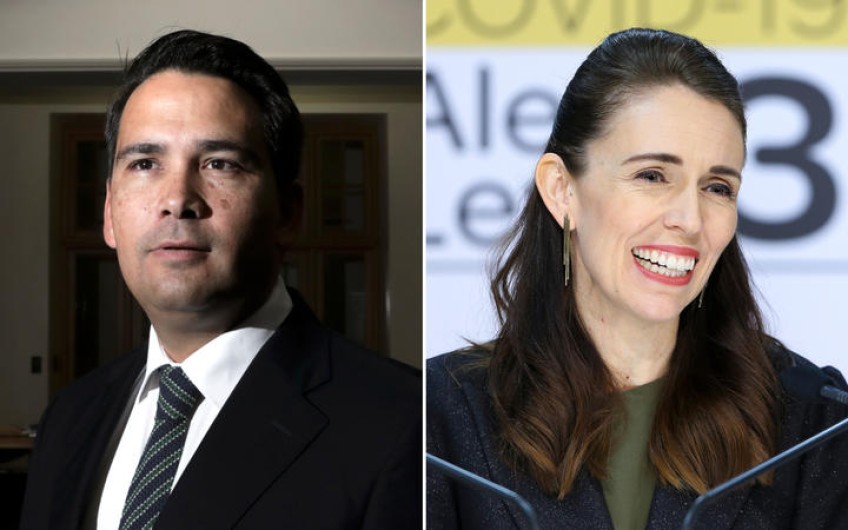 Opinion: Why Bridges' leadership tactics are tanking his ratings

Opinion - Simon Bridges' problem as National Party leader is that he is relentlessly negative at a time when the country is led by a relentlessly positive prime minister.

When Jacinda Ardern became Labour leader in August 2017, she promised to bring "relentless positivity" to the party and to the rapidly approaching election campaign.

In the three years since then she has stuck to that mantra, repeating it again last year - though, notably, that was in the context of the prime minister defending negative Labour Party advertising against Bridges.

Arden has been rightly lauded - both in this country and overseas - for her empathy, compassion and communication skills. She is photogenic, smiles a lot and is quick with a quip to lighten the atmosphere.

Her government is also not afraid to acknowledge its mistakes and to take speedy action to remedy them. When there was an outcry over the 10-person limit for funerals and tangihanga last week, that decision was reversed within 48 hours.

By contrast, Bridges' downfall has been that he takes the word "opposition" in his title of opposition leader all too literally - and far too single-mindedly.

There is a reason that "opposition leader" is described as the worst job in politics, and obviously the role involves a lot of criticism of the government and pointing out of its mistakes.

However, that is not the sole job description. The opposition leader must also present his or her party's vision for the future. That means offering people hope, something Bridges appears unable to do. It is not even clear that he regards it as necessary.

The two most recent examples of that were his April criticism in Parliament of the government's $25 increase in welfare payments as leading to "baked-in beneficiaries," and a Facebook post accusing the government of not having "done the groundwork" minutes after an extension of level 4 was announced.

However, those are simply the latest illustrations of Bridges' pervasive negativity. The pattern of him favouring the downside rather than the upside is so characteristic of his leadership as to be its defining motif.

Former prime minister and National Party leader John Key, while still in opposition in 2007, won kudos when he unexpectedly announced that the party would support an amendment to Green MP Sue Bradford's anti-smacking bill to allow it to pass into law.

Key could have chosen to oppose the legislation until the bitter end, but his agreement to a compromise was a pivotal moment in his journey to becoming prime minister.

Key was known as Mr "smile and wave." That was a comment on his lack of fixed positions and a criticism of a lack of policy and philosophical depth. However, the nickname demonstrated that he at least understood the importance of the "smile" bit.

Bridges, it appears, has never seen that as a lesson for him.

The National Party leader - unlike Ardern - is also unwilling to admit his mistakes. Instead, he digs in and makes the situation far worse. A clear example of that was his pursuit of the 2018 leaker of his expenses. The numbers were due to be publicly released anyway within days and the story should have blown over quickly.

Bridges kept it alive with his adamant, and mistaken, insistence that Parliament's Speaker was the leaker and must be held to account. It was quickly plain that, not only could National achieve no benefit from pursuing the issue, but it was actually a distraction and a negative for the party.

That did not prevent Bridges from continuing to litigate the matter, dragging it out for even longer by insisting that National set up its own inquiry into the leak. In turn, that provoked the explosive and damaging Jami-Lee Ross saga.

Throughout the episode the country saw not only a negative Bridges, but a leader who lacked judgment. Leaders have a plethora of advisers but they make the final calls and judgment is a crucial criterion. Without it, successful leadership is impossible.

Bridges is unashamedly conservative. He opposed changes to abortion laws at their third reading, is against euthanasia and does not support the legalisation of cannabis.

Those views might not appear to be a problem as Bridges leads a conservative party. However, his beliefs are not only out of step with a majority of New Zealand public opinion, but are also at odds with the views of many National Party voters.

The National leader did a good job in his early weeks chairing Parliament's Epidemic Response Committee. He was good-humoured, showed a joking side of himself and chaired the meetings constructively.

I saw a side of him that I had not seen before, and the committee seemed to work well and be more constructive than the mandatory confrontation characteristic of the House. I have not watched the hearings in recent weeks, but the media reports indicate that the tone has turned more negative and aggressive.

In his Budget speech on 14 May, Bridges started off by saying that he was proud of the collective efforts of the nation and would give the government credit for getting the wage subsidy up and running quickly. He also said that a lot of New Zealand's Covid-19 response had gone incredibly well and there was much that was good in the government's Budget.

But that was it for the positivity. The rest of the speech was a depressing catalogue of doom. While the prime minister and Finance Minister Grant Robertson pledged to continue to save as many jobs as possible, the National Party leader's vision was different.

"You've lost your livelihoods and the nest eggs you've worked so hard to build up. National stands with you."

Promising to stand alongside New Zealanders in the smoking ruins of an economy does not provide people with hope, and nor did Bridges' predictions of a tsunami of debt, economic disaster and deep economic recession.

The country can already see how scary the future is. No one is under any illusions that the coming months will be anything other than extremely difficult, but people want to hear something positive, not a recitation of gloom.

As Covid-19 started to really hit home in this country in March, the National leader offered the country a "regulations bonfire" which he said would allow businesses to thrive and prevent them from being strangled by red tape and bureaucracy.

There is nothing visionary or hopeful about that.

But Bridges is a very different politician.

*Cat MacLennan is a journalist and barrister and former political reporter.