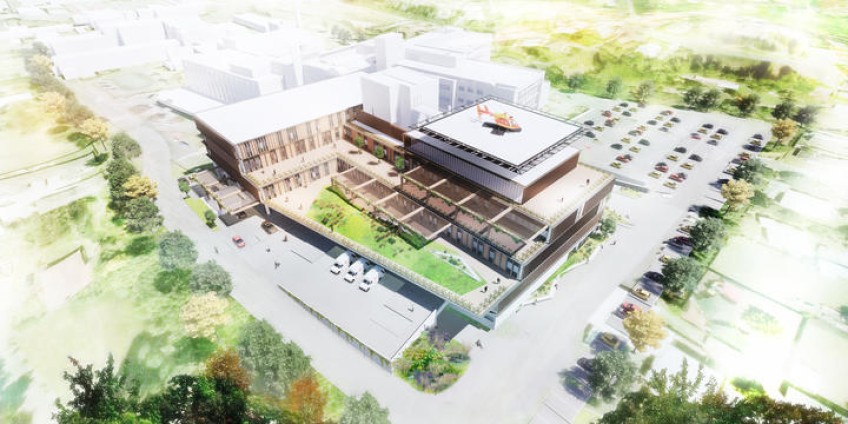 New Taranaki hospital wing will provide lifeline in a disaster

A new $300 million wing at Taranaki Base Hospital will allow it to transfer crucial services out of earthquake-prone buildings and into state-of-the-art facilities, its chief executive says.

"This will take the really really acute problem out of it. So we've got four seismically compromised [clinical] buildings and we'll take the clinical services or the 24/7 services out of those buildings and that means we'll just about be compliant with all of those. Then its just a matter of looking at the outpatients and ambulatory services after that," she said.

Ms Clements said the new building's design will provide significant resilience benefits for the entire campus, with features designed to provide services even in a major disaster.

It has it's own power supply, water storage, computer systems, and a medical gas supply for the entire Taranaki Base Hospital campus.

"The New East Wing building will be capable of providing emergency medical and surgical care post a major disaster. It will deliver modern models of care and improve service delivery which improves patient outcomes and quality of care."

Ms Clements said the Taranaki District Health Board was grateful the government has prioritised this funding to upgrade the hospital.

"There's a lot of demand for capital investments across the country and Taranaki has been lucky to receive this $300 million, which is going to go along way to meeting our seismic issues that we identified last year."

The new wing is stage two of the Project Maunga hospital redevelopment.

As well as ED and ICU, the new East Wing will include a purpose-built maternity unit, new laboratory and radiology facilities, a new morgue, and a rooftop helipad for faster, safer transfer of patients.

"Taranaki Base Hospital serves a population of 120,000 and last year its Emergency Department treated 33,600 patients - with tens of thousands more receiving inpatient, outpatient and other services. They deserve modern, fit-for-purpose facilities that support high quality services," he said.

Mr Clark said the government was serious about the long-term challenge of rebuilding the country's hospitals.

He said the new wing would target a 5-star Greenstar certification, reducing the energy, water and carbon footprint of the hospital, but more importantly the upgraded facilities would improve how acute clinical services were delivered.

"I'm particularly pleased that the new maternity ward will house a primary birthing unit, delivery suite, antenatal clinic and assessment unit - and that a postnatal ward will be [placed near] the neonatal unit. That will be great news for new mothers and their babies."

Ms Clements said detailed designs for the project were being drawn up and final approval was subject to a detailed business case being signed off and work towards this was already well advanced.