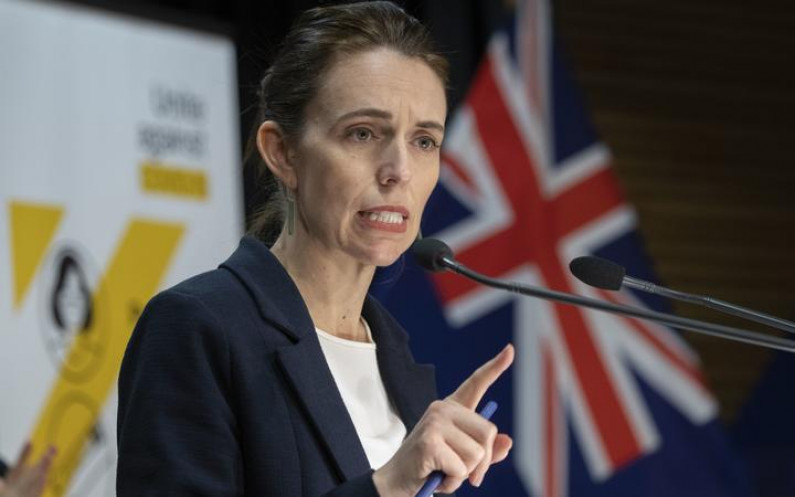 The man behind yesterday's terror attack in New Lynn was released from jail after three years in July after every legal avenue was pursued to keep him in custody, the Prime Minister has confirmed today.

Prime Minister Jacinda Ardern and Police Commissioner Andrew Coster have held a media conference to update the New Zealand public on the response to the attack at the LynnMall in Auckland.

A Sri Lankan national was shot dead by police after stabbing six people inside Countdown in LynnMall yesterday afternoon.

Seven people were injured and three people are in a critical condition after the attack yesterday.

While the man can still not yet be named, Ardern gave further details of his criminal history today.

The terrorist was 22 when he arrived in NZ in 2011 and it was not known he held extreme views. He came to the police's attention in 2016 after he made concerning posts on Facebook.

He was arrested in Auckland Airport, where authorities believed he was travelling to Syria. In August 2018 he breached bail and bought a knife, and also assaulted Corrections officers while in custody.

Ardern was briefed in May 2020 on the case. GPS monitoring was sought by the Crown but not imposed by the courts.

In July he was released into the community and surveillance began.

"In late July, I was given a written update on the case. On the 9th of August I met with officials and discussed further options to try and reduce the risk that this person posed to the community.

"In late August, officials including the commissioner of police raised the possibility of expediting the amendments to the counter-terrorism legislation. Within 48 hours of these discussions, the minister of justice contacted the chair of the select committee with the intention of speeding that law change up. That was yesterday, the same day the attack happened.

"As you can see, agencies used every tool available to protect innocent people from this individual. Every legal avenue was tried."

She said she wanted to explain why the terrorist was not deported but can not yet because of suppression orders.

She said Parliament will pass the Counter Terror Legislation Bill by the end of the month. The bill makes planning and preparing for a terror attack illegal.

"As soon as Parliament resumes, we will complete that work. That means working to pass the law as soon as possible and no later than the end of this month."

Ardern thanked National Party leader Judith Collins for reaching out with support for that.

She said it was not fair to make an assumption that the law change would have made a difference in this case.

"This was a highly motivated individual who used a supermarket visit as a shield for an attack. That is an incredibly tough set of circumstances."

While she was unable to share his name, "this is not something I had any intention of sharing regardless", she said.

"No terrorist, whether alive or deceased, deserves their name to be shared for the infamy they were seeking."

She ended her statement with words from the Imam of Al-noor Mosque. "All terrorists are the same, regardless of their ideology. They stand for hate, we stand for peace and love. We have it within our powers to ensure the actions of an individual do not create a knock-on of hate, judgement and vitriol. I know, New Zealand, you will be kind. Please wrap your arms around all of our victims - those of yesterday and those of the past."

Commissioner Coster said there was nothing unusual about the terrorist's actions before the attack yesterday.

He said all indications were the attacker was "planning for the future".

He said the first stabbing occurred 60 to 90 seconds before the attacker was shot dead.

"Monitoring his actions has been entirely dependant on our surveillance teams being able to maintain their cover."

The man was highly suspicious of surveillance so they needed to keep their distance.

Coster acknowledged the first aid given by staff and general members of the public at the scene.

He said there are people with extreme views but yesterday's attacker "caused us the greatest concern".

Police will maintain a visible presence around supermarkets and the terrorism threat level remains at medium.

Coster said they will be keeping an eye out for actions motivated by hate in light of the attack and that there was a lot of misinformation circulating around the event.