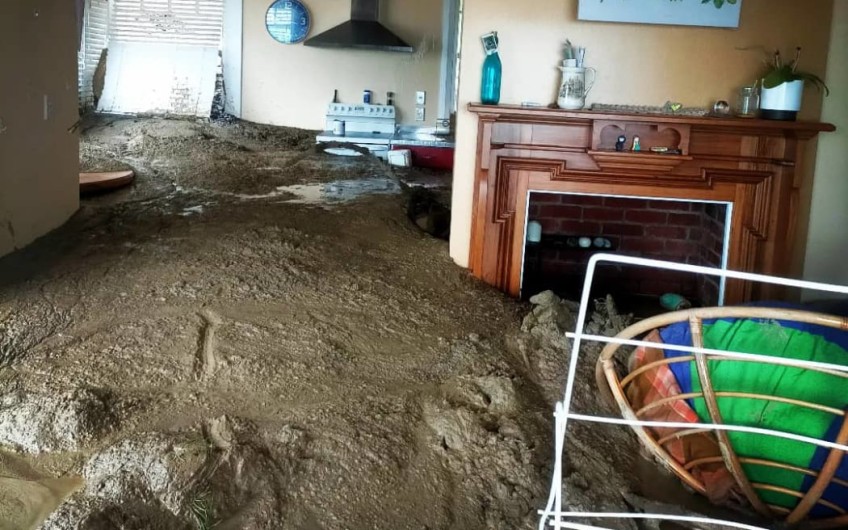 Some residents of Nelson's Rocks Road have been able to go home with their properties deemed safe, following hundreds of landslides triggered by the recent deluge that had threatened them.

But many were still waiting to learn if and when they will be able to return.

In Nelson, 62 homes were still red-stickered and almost half of those - 26 - were in Tāhunanui.

Nelson City Council is holding a meeting for residents of red and yellow stickered properties this afternoon at Trafalgar Pavilion.

Many were located on what was known as the Tāhunanui Slump, a large, active, well-documented landslide on the hills overlooking the beach.

Nine households along the waterfront on Rocks Road were able to return home earlier this week after their red stickers were updated to white, and five were changed to yellow.

For Alana Pearce and her two kids, the red cottage they call home was still red stickered.

The once rundown 1940s bungalow was restored six years ago and painted a bright, striking red which made it one of Nelson's most recognisable waterfront homes. But it was now surrounded by a landslide, and inside the thick mud sat waist deep. 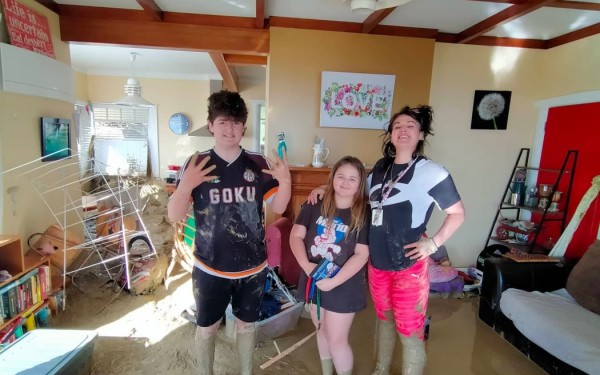 Alana Pearce and her kids in their red stickered Rocks Road home in Nelson (Image supplied).

"It's very hard even now to drive past it and just know that my things are still in there - they are just things, that's fine. But it's heart-breaking it's not going to be home for a long, long time," Pearce said.

Pearce had rented the "cutest house in Nelson" for the last five years and said it was her "forever home".

She and her kids were evacuated during the torrential rain, over concerns the houses above would slide down the hill.

Since then she had been able to return a few times to salvage some belongings. But the level of slip debris inside was higher each time they went back in, with some doors wedged shut by the mud.

"It was very messy and the smell was unbelievable, but I managed to grab some things that meant something to me.

"Everything else can be replaced but I got the things that really meant something to me ... a little bit of closure there, it was nice."

The mud and slip debris throughout the house has wedged all the doors closed and only a few belongings were able to be salvaged. Photo: Supplied/ Alana Pearce

Fellow Rocks Road resident Rob Pooley was able to return home this week after the red sticker was removed from his house, but he didn't feel celebratory when so many others couldn't go back to theirs.

He said there could be better management of the slump.

"This has been going on, off and on, for decades and there's some clear and obvious mitigation work, remedial work, that needs to be done just to manage some of the water.

"This is not a healthy situation where once the water is off my property it is not my problem, you just can't do that on a hill like this one."

Research had showed (Read the Soils and Foundations Ltd report on the Tāhunanui slump here) that elevated groundwater levels are a feature of the slump, and springs and ponds had existed on the hillside before its development.

Some had been intercepted by the stormwater system, but not all had been controlled.

Pooley said a representative group of residents should be appointed to work more closely with Nelson City Council with a solutions based approach moving forward.

"I truly believe that the council and the geotechnical professionals have got a really good handle on what's going on here, I don't have any doubt about that, but I think sometimes even the advice from some of the most informed goes unheeded."

He said many Tāhunanui residents were now stuck in a process that would take some time to work through.

"My heart goes out to all of those people who are technically in limbo as they await full and final decisions and I think it goes without saying that there are one or two obvious instances where it's going to be really tough."

GNS Science engineering geologist Chris Massey said the hundreds of slips detected across the region after the heavy rainfall were now being systematically mapped.

More than 250 were deemed to be critical.

"The Tāhunanui landslide has been known about for quite a long time, it's well documented, it's moved multiple times in the past and it reactivated in this event," Massey said.

"The last time it was known to have reactivated was in 2011, when there was that long period of wet weather."

Stability problems were encountered on the Tāhunanui Hills in the 1890s during the construction of Rocks Road.

Several landslides occurred in the area following the Murchison Earthquake in 1929, then again in 1962 after further earthquakes and during heavy rain in 1995 and 2011.

Nelson Tasman Civil Defence geotechnical response lead Grant Maxwell said about 50 properties on the Tāhunanui Slump were affected in the recent weather, with many still out of their homes.

He said the movement of the slump replicated that of 2011 and assessment showed the change in groundwater profile and movements had reduced back to nothing.

"We've got a roadmap to get as many people back in as fast as possible," Maxwell said.

"We do have to really look at the utilities below ground, water, stormwater, wastewater, to make sure when they all get turned back on again ... there's no disruptions ... so they don't put more more water back into the ground.

"There is no doubt going to be some properties that property owners would like not to live in and we've heard a number of people in our work in the field say they would prefer not to go back into the property again where they think there's elevated risk."