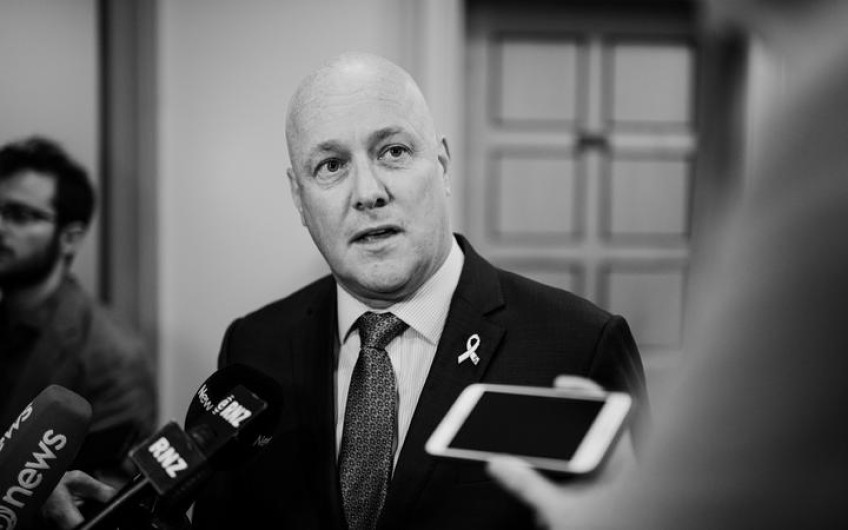 He took the opportunity provided by his maiden speech to declare it had become "acceptable to stereotype those who have a Christian faith in public life as being 'extreme'...my Christian faith [has] anchored me, given my life purpose and shaped my values, and it puts me in the context of something bigger than myself".

Described as a "Christian fundamentalist", Luxon knows as well as anyone that could be a vulnerability if he follows the path of future leadership. He's pre-emptively setting the narrative: religious beliefs don't necessarily mean extreme political positions, that Christianity can be altruistic.

Christianity in politics, of course, is nothing new; his own National Party now has a definite seam of Christian conservatism with MPs of strong faith holding some of the party's safest seats - noticeably more so than during the days of John Key.

Even the successor of the openly agnostic and eminently pragmatic Key, committed Catholic Bill English trod a careful line while prime minister, between exerting his own personal beliefs and governing for an electorate that doesn't always embrace religion impinging on executive decisions.

The commitment to religious values in National shone through last term in particular because Parliament had hefty and long-running conscience issues - voluntary euthanasia an obvious one. These are, of course, issues where MPs are expected to draw on their personal beliefs; the legislative debates and public hearings just provided a platform for views expressed forcefully, often intertwined with matters of faith and religion.

The decimation of the caucus in 2020 has also concentrated the influence of the male, Christian conservative MPs in those blue-ribbon seats, predominantly in Auckland, with other colleagues removed from electorates that fell to Labour or stripped off the list.

In fact, Luxon's statements his faith "is not in itself a political agenda", "no religion should dictate to the state" and "no politician should use the political platform they have to force their beliefs on others", echo English's own commitments when he took over as leader and PM - just made in more deliberate and strategic fashion.

It's in keeping with the convention of the separation of church and state, but having attended rallies in the United States by the likes of Republican Ted Cruz and where being Christian is almost a pre-requisite to being president, New Zealand politics clearly have a much more secular bent.

There is absolutely a Christian constituency out there for a party that could pull together strong credible leadership and a manifesto based on Christian values, while acknowledging modern day New Zealand. However, former National MP Alfred Ngaro decided it wasn't a goer to set up a new party after testing the water in 2019.

Christian based parties in the past haven't exactly covered themselves in glory but have come close to getting into Parliament. The Christian Coalition, led by Graham Capill and Graeme Lee, fell just short in 1996 with 4.3 percent support at its peak, but the party then splintered. A major blow to Christian politics was the sex scandal after Capill was jailed for nine years in 2005 after pleading guilty to abusing three young girls.

The following decade the Conservative Party was born, led by Colin Craig. He financially backed the party and raised its profile; at its most successful it gained 3.97 percent of the party vote in 2014 but failed to win any seats. The end of those political aspirations was also marked by court action - several cases of defamation and cross claims over many years

The major parties also court Christian conservative voters; Labour has a religious base particularly through its Pasifika supporters which can sometimes cause it to teeter uncomfortably between that and its strong liberal wing. Remember Judith Collins praying in the election campaign and asserting her Christian faith?

However, the risk is if a leader of a mainstream party like National is seen as too extreme, too willing to allow their personal beliefs to dominate their political decisions, there's a danger of turning off the large rump of middle ground voters - some traditional National voters. They're the voters that deliver the victories needed to take, or keep, power.

Luxon is playing the long game with rote lines whenever he's asked about future ambitions: he's a recent arrival, he's learning the ropes, he's just going to do the best job he can within the caucus. Presenting a soft and compassionate face is crucial to the nurturing of his brand and he's chosen to start the process in a direct way.

In Key's day it was called 'inoculation' - get it out, face it head on and make sure it doesn't become an issue in the future. He did it with the superannuation age and Labour's Jacinda Ardern has done it with capital gains tax.

Personal beliefs are a different matter, they shouldn't be cauterised for the sake of political expediency. The trick for Luxon will be to convince the public there's no threat, that he'd be a leader for all, not just the religious right.