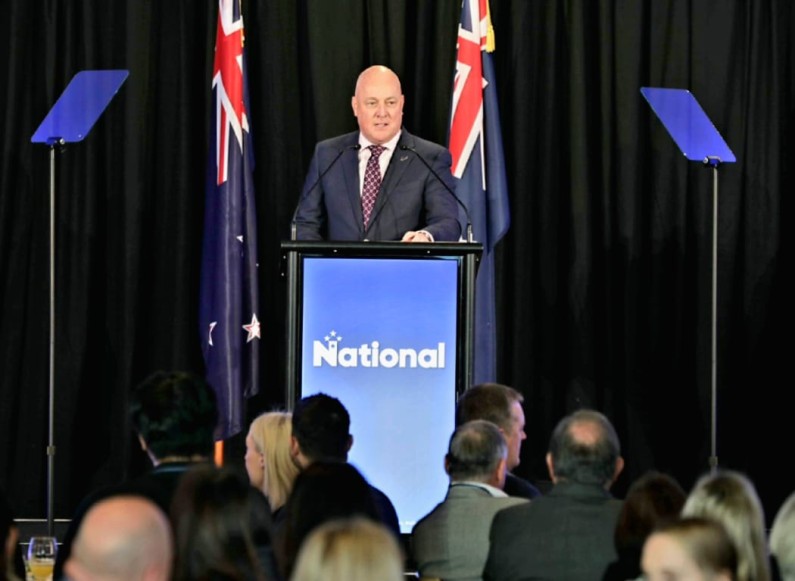 National Party leader Christopher Luxon has described the Budget as a missed opportunity, a blow out and a backward step for New Zealanders.

Speaking at a breakfast meeting in Auckland, Luxon said there is a tradition to name the Budget each year and names considered were the big blowout Budget and the bandaid Budget.

Luxon said the Budget was a missed opportunity and households are being squeezed by the cost of living crisis.

He said inflation is the highest it has been in the last 30 years and it is a phenomenon that people have not had to deal with in recent times because prices have been stable.

Many New Zealanders do not remember the early 1980s when interest rates were high and there was strong double digit inflation, he said.

"So inflation's at 7 percent, you've got wage growth at 3 percent and that just means all of us have less purchasing power, our money doesn't go as far and we're worse off than we were say 12 months ago."

Luxon said that will continue because mortgage rates and rents are going up, grocery prices are increasing and fuel is more than $3 a litre.

Luxon said the Reserve Bank is charged with keeping inflation at a rate of between 1-3 percent and currently it is at 7 percent.

Treasury's Budget forecasts were that inflation will not return to under 3 percent until 2025, he said.

"We actually need monetary policy, interest rates, to be working with fiscal policy, good government spending and control together that's the way that we can get a pincer move on inflation."

He said by 2025 unemployment is expected to be just under 5 percent.

Luxon said it means the cost of living crisis will continue for New Zealanders.

Luxon said there was not enough in the Budget for "the squeezed middle" and they are the people who need help.

"They earn incomes above what gives them formal government assistance but they don't earn enough to be able to deal with the cost of living crisis and all the rising costs that they're confronted with."

Luxon said the $350 payment was a last minute add to the Budget but Inland Revenue and Treasury advised against it.

"Because you've got a long-term problem out to 2025 and you're now talking about a three month solution with this bandaid of a sugar hit that actually isn't really solving the problem."

National would consider lifting all the tax brackets by the current inflation level which means people can keep their money in their pockets to spend or save as they see fit, Luxon said.

He said indexing the tax brackets to inflation would provide more permanent help rather than a three month solution.

Luxon said the Reserve Bank needs to focus on a single mandate of fighting inflation and price stability because it is the biggest challenge the country has right now.

He said costs need to stop being added to businesses because that is then passed onto consumers which leads to more inflation and deal with immigration settings to stop bottle necks in the economy such as staff shortages.

Spending needs to be reviewed and income relief for the "squeezed middle" needs to be introduced, Luxon said.

He said there has been a massive blowout in regards to government spending which has increased by 66 percent since this government has come to power.

Luxon said he believes a lot of that spending has occurred the government misread the Covid crisis and treated it as a demand side problem rather than a supply side problem.

"Grant Robertson's gone off and spent the $6 billion that he's talked about, $6 billion yesterday is the biggest increase in Budget spending in the history of this country."

Luxon said Robertson actually announced about $9.5b spending because some money from the 2023/2024 Budgets has also been included.

"Grant Robertson is addicted to spending and he can't help himself and that's what you're seeing with this government as we go forward."

Luxon said the government has demonstrated "a lot of spin but no delivery".

More spending, more bureaucrats and less outcome is a common theme for this government, Luxon said.

He said the government has confused spending announcements with outcomes and ministers do not know how to convert money into action.

Luxon said if National is able to roll back the new entity which will replace RNZ and TVNZ it will.

He said from his point of view the RNZ and TVNZ merger for $30m "doesn't feel like a good investment".

"I don't understand the rationale for why we are merging TVNZ and RNZ, I think it's a solution in search of a problem that's been very poorly defined and so from my perspective I'm really struggling to understand why we're doing it, what are the benefits, what's the problem that we're trying to solve that we [don't] think needs to be fixed?"

He said the government has an unknown agenda in spending the $330m for the new entity.

Luxon said the government does not get things done so it will probably be easy to wind back a merge of the two organisations should National be the next government.

Luxon said the government has removed health targets and the health workforce is stretched and stressed.

"Instead what's happening is we're spending $680 million on a massive restructure and churn to create more bureaucracy, more middle management jobs but not a single improved health outcome."

Luxon said the government should be focused on health outcomes rather than increasing bureaucracy.

He said a strong economy is critical to improving education, health and wages.

He said the books and the country are going backwards.