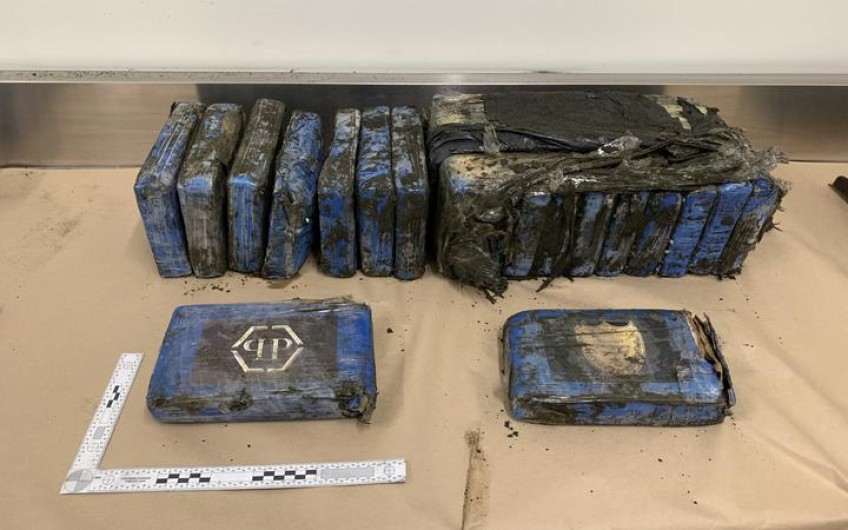 Locals bemused by $3m of cocaine washing up

Locals at Bethells Beach are surprised to find out $3 million worth of cocaine washed ashore this morning.

The drugs were found by a passersby at the rugged west Auckland beach. No arrests have been made, and the police are trying to work out where the drugs came from, and where they were destined.

Nineteen bricks of cocaine, about the size of a VHS tape, were wrapped in blue plastic. The photo supplied by the police shows them looking a little worse for wear. Based on past police estimates, the $3m of the powder is likely about six or seven kg. Each package is adorned with what looks like a logo and a crest.

This morning at the beach, all was quiet. There was no sign of the police, and only a handful of people walking their dogs, including Sandra Murphy who's there twice a week.

"My God, idiots aye? I can't believe people do such things. It's such a beautiful beach and [people are] ruining it with that kind of stuff coming ashore," Ms Murphy said.

"Never seen anything strange out here... Usually I'm a bit of a beach comber and I look around the beach as I'm walking along. It's a little bit strange but you never know what washes up on these beaches."

It's a large haul for a drug that has never been as popular in New Zealand as methamphetamine or MDMA.

The most recent Global Drug Survey, run out of the UK, found New Zealand has the most expensive cocaine in the world, more than double the global average.

That's attracted some opportunists. In the last few years there have been some big busts: 35 kg in a diamante horse head sculpture, 46 kg at a house in Tauranga, and late last year a record seizure - 190 kg in a banana shipment.

"It's pretty surprising, yeah," one man, Ryan, said. "My friend text me this morning and he was pretty excited about it.

"There's not much buzz around. There's plenty of police boot marks and stuff. They've had a good look and they've probably got it all, I'd say."

Police said there's a small possibility more packages might roll in with the waves.

Ryan said it's very quiet during the winter, and it's usually a handful of people walking their dogs. He said nothing usually turns up on the beach.

"There's a dead seal down there, just the odd fishing tangle and that. Nothing as exciting as last night."

The police said the Eagle helicopter would be up today searching the wider area.

Detective inspector Colin Parmenter said in a statement they were called Wednesday evening. They searched the beach thoroughly, and testing confirmed the substance inside was cocaine.

He said that over the coming days police will visit the beach in case any more items wash up. Their investigation to work out where the drugs have come from continues, and they're hoping people with information will call Crimestoppers.