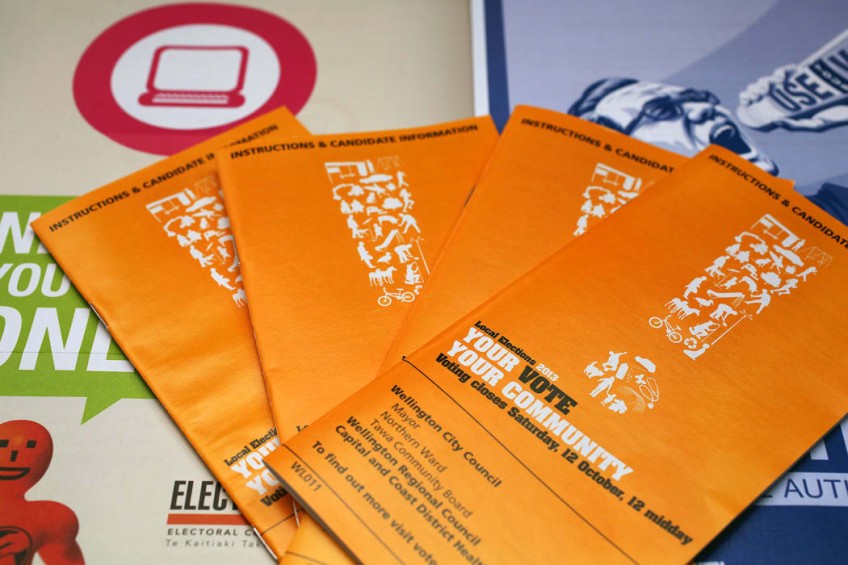 As Local Government New Zealand unveils a guide to local body candidates in the wake of conspiracy theorists and extremists putting up their hand for elected office, RNZ has approached some of these candidates to find out why they are standing and what they hope to achieve.

Anti-misinformation group FACT Aotearoa had concerns about more than 170 candidates - about 5 percent of those standing for election.

So RNZ approached some of these candidates, some of whom we knew from previous interactions and others who we spoke to for the first time.

We wanted to find out why are they standing at the local elections? And what they hope to achieve?

From Agenda 2030 to 5G and vaccination, it was clear many candidates were airing issues at this year's local elections that were outside the usual traffic, animal control and sewerage fare.

But the first thing to point out was people with unusual views had always held office.

Five-time Dunedin councillor Lee Vandervis had always attracted controversy, but this term he had spoken against the Covid-19 vaccine and mandates, and advocated unproven treatments.

"When people want to know something about my personal views - even though I don't believe they are largely relevant to local government - I am in a fortunate position, having almost double the vote of any other councillor, of being able to give those personal views and still pretty much guaranteed to be elected, at least as a councillor," he told RNZ.

He conceded his positions over this triennium had hurt his mayoral aspirations.

But Vandervis believed people should be willing to share with the voting public their genuinely-held beliefs - mainstream or not.

He had also admitted he had questions about the official account of the 9/11 terrorism attacks and the need for fluoridating drinking water.

But did he consider himself a conspiracy theorist?

"No. There are definitely conspiracy theorists and extremely paranoid people out there that are worried about everything and think that there's dark forces behind everything. I personally believe that you should never suspect malice when incompetence will serve."

So while he had views far outside the consensus on some topics, he drew the line at nefarious forces attempting to kill people or destroy democracy.

Controversial rather than conspiratorial

Three waters, the UN and the New World Order - Booth

Gill Booth had put her hand up for the Teviot Valley Community Board in Central Otago.

She told RNZ she had a platform of exposing Local Government New Zealand and ensuring a referendum was held on three waters reform.

But she was vague beyond that.

So what did exposing LGNZ actually entail?

"I wouldn't tell you that," she said, laughing.

"That's like telling you what I'm going to do three moves ahead in a chess game."

But Booth did say she believed LGNZ was imposing an agenda on councils and local bodies - an agenda handed down to them from the United Nations.

She pointed to the government's proposed three waters reform as an example of this agenda dictated by the UN.

While speaking with Voices For Freedom - an antivax group formed by Claire Deeks, Alia Bland and Libby Jonson - on a livestream last year, she gave a deeper insight into her world view.

"I fell into this about 20 years ago and when I first heard about the New World Order - we'll go there - I didn't believe it because I didn't see how it could possibly work. And then I started watching this happen, especially in America, because it happened quite quickly over there," she told the group.

The New World Order was a conspiracy theory formed on the belief a secret cabal was attempting to form a global authoritarian government.

But when asked about it, Booth denied ever discussing it among Voices For Freedom.

"We don't speak about the New World Order at all - that is blatantly untrue," she said, again laughing.

After further to-and-froing Booth conceded she did speak about the New World Order, but it needed to be taken in context.

Stevey Chernishov - who was standing for the mayoralty of Invercargill and to be a councillor in Southland and Queenstown Lakes - had spoken at the Parliament protest and at events organised by Counterspin Media, whose owners appeared in court on Wednesday charged with sharing a version of the Christchurch terrorist's livestream.

Chernishov said he did not see himself as a conspiracy theorist.

But Counterspin Media had broadcast calls for violence and pushed dangerous conspiracy theories.

So why did Chernishov speak at their events?

"Well, I'm an atmosphere shifter," he told RNZ in explanation.

"Everywhere I go there's hope and joy, and there's a belief in others. I bring positivity to everything I do."

Chernishov freely admitted he was not vaccinated against Covid-19.

RNZ asked Chernishov whether he accepted SARS-CoV-2 was a real virus which had killed millions worldwide.

"I actually think it's irrelevant in this question," he responded.

When pressed for a straight answer, Chernishov replied: "My advice to people is to eat spicy food. Eat a lot of vegetables, know where your food comes from and what's in it. And to have fun and to have adventures. I think that's how we should do life, regardless of what's going on in the world."

When asked for a yes or no answer as to whether he accepted the existence of the virus and the death toll it had caused, he responded: "Are you trying to trip me up?", before offering "I'm not a medical expert, I actually don't have a science background, so I don't know".

Pita says she seeks 'to bring the people's voice' to council

They were former co-ordinators for Voices For Freedom in Dunedin.

Pita said she was not hiding from that role, but had not included it in promotional material for the local elections because she knew it was polarising.

She still supported the group and its aims, but said they had not motivated her decision to stand for council nor were they offering any support to her campaign.

Pita said she had not attended the Octagon protest and was not involved in any way.

When asked what policies she hoped to achieve if elected to council, she said: "My main one is to bring the people's voice to the council, to know that relationship is very clear".

"With regards to policies at this stage, I very much want to get some clarity for myself on three waters and I also want to look at the traffic - the one-way system."

On 29 July, Pita shared a video about the prime minister, under the message "Is Miss A pushing us towards c*mmun*sm".

One of the claims made on the video was Jacinda Ardern was "going out of her way to change the governmental structure of the country, giving the native race, the Māoris [sic], institutional rights, affirmative action government. This has been a long-time communist programme".

Asked if she believed Ardern was pushing the country towards communism, Pita responded: "I haven't said that though, that's nothing that I've said".

When asked if she made the post just over a month ago, she paused before recalling "ahh, oh yeah, I do remember that post that I made".

When asked again if she believed Ardern was a communist and attempting to turn New Zealand into a communist country, Pita said: "No, I don't believe she's a communist".

She conceded she might have misspoken by using the word communism and did not wish to provide her definition of communism.

"No, I would much rather not. We've talked about this enough, you've got enough information from me and what I did. I don't have the post in front of me to remind myself exactly what the video was because if I had the video in front of me I'm sure I'd be able to remember what it was," she said.

Local Government New Zealand was advising voters to do their homework on candidates, ask them questions and make sure people voted for those they wished to represent them.

Voters can visit the Policy.NZ website, where candidates had provided their views on a range of topics.