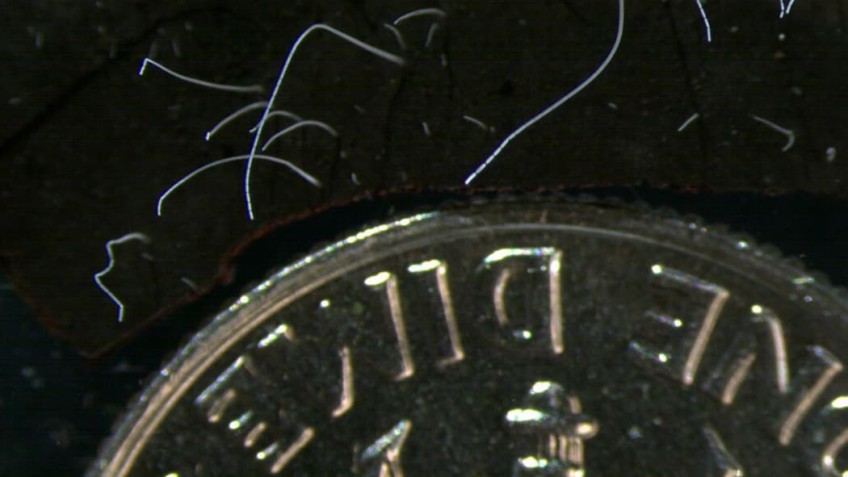 Largest-known bacterium found — you can see it without a microscope

In a stinky, swampy mangrove forest in the French Caribbean, a strange giant lurks among the fallen leaves.

It looks more like a vermicelli noodle than something out of The Creature from the Black Lagoon and it has an insatiable appetite for sulphur - the stuff that gives rotten egg gas its unmistakable stench.

Meet Thiomargarita magnifica, the largest bacterium that scientists have found so far.

At a whopping 1 to 2 centimetres long, this giant microbe is bigger than a fruit fly and can be seen with the naked eye, according to the research published in Science.

"It's about 5000 times bigger than most bacteria," said lead author Jean-Marie Volland, a microbiologist at the Lawrence Berkeley National Laboratory in California.

"It would be the same as encountering a human being the size of Mount Everest."

Discovering the largest-known bacterium was the last thing on Olivier Gros's mind when he was hunting for microbes in the mangrove forests of Guadeloupe in the French Caribbean almost two decades ago.

While collecting samples from the murky water, Professor Gros noticed a long white filament clinging onto a leaf.

The marine biologist decided a closer look was in order, and took the hair-like filament back to his lab at the University of the Antilles in Guadeloupe and viewed it under a microscope.

"It was so huge," Professor Gros said.

"I didn't think it was a bacterium. I thought it was fungi or something."

Professor Gros couldn't see any of the typical cellular features you would find in eukaryotes, the broad group that includes plants, animals and fungi.

For a start, there were no mitochondria - the cellular machines that produce energy.

There were also no nuclei, the tiny structures within our cells that hold genetic information.

Instead, the thread-like organism looked more like a single cell than a chain of hundreds.

"It was just something strange," he said.

But an initial genetic analyses revealed that the oddball organism's makeup matched with Thiomargarita, a genus that includes bacteria that feed on sulphur.

So Professor Gros and his team tentatively named the microbe Thiomargarita magnifica, a nod to "magnus", the Latin word for "great".

Bizarre inside and out

When Dr Volland joined the lab a few years later, his heart was set on studying the "macro-microbe" and confirming that it was indeed a bacterium made up of one cell.

The team collected more samples from the mangrove forests in Guadeloupe and used a range of powerful microscopy techniques to look at the filaments in three dimensions.

When Dr Volland and his team zoomed in on these single-celled threads and scanned their entire length, he couldn't see segments you would expect to see in a multicellular organism.

These "pepins" were a bizarre feature, because bacterial DNA typically floats freely inside cells instead of being neatly bundled inside cellular containers as it is in humans, plants and animals.

"This has never been observed in bacteria before," Dr Volland said.

"It is actually something that is characteristic of complex organisms."

These packages of genetic material could have allowed the bacterium to grow to its massive size, said Ashley Franks, an environmental microbiologist at La Trobe University who was not involved in the study.

"We used to think that [bacteria] were always like a soccer ball and they were set to a certain size," Professor Franks said.

"Everything just mixed together in the middle and that's how you got all the functions."

This was thought to be why most bacteria have stayed small, as growing too big would throw their inner chemistry out of whack, Professor Franks said.

But because T. magnifica's insides are relatively organised and somewhat separated, it was able to grow to its huge size without losing its chemical balance.

"It starts to tell us about how you go from something basic like a bacterium to something much more complex," Professor Franks said.

A library of genetic possibilities

Next, the team sequenced T. magnifica's genome using five of the filaments they collected.

The genome itself was huge and contained roughly 12,000 genes - that's three to four times more than most bacteria, Dr Volland said.

A large portion of the giant bacterium's genes also indicated that it stores carbon and relies on sulphur for energy.

The bacterium also contains about 37,000 copies of its genome per millimetre, the largest number of copies to be found so far in a bacterial cell.

Professor Franks said the wealth of genetic material in T.magnifica offered a tantalising new toolbox for designing and engineering organisms to create products like biofuels, pharmaceuticals and food.

"I always think of a genome like a book, and this is a massive library of 37,000 copies of the book, and you can have different books for different things," he said.

"You could hold a whole bunch of different copies of information in different genomes and get them to switch on and off, depending on what you need."

For Dr Volland, T. magnifica opens up a treasure trove of questions, from how the bacterium evolved to be so huge to what its role is in the mangrove ecosystem it inhabits.

The discovery also challenges the idea that bacteria are simple organisms that can only be seen under a microscope.

"It tells us that bacteria do evolve to a higher level of complexity," Dr Volland said.

"It's actually a pretty unique system to look at, because you can see it as an opportunity to study the evolution of biological complexity in real time."

Professor Gros said the next step would be to figure out how to grow the giant bacteria in the lab and learn more about its physiology, such as how it attaches itself to fallen mangrove tree leaves.

"We [will] have many, many years of experiments with this model," he said.