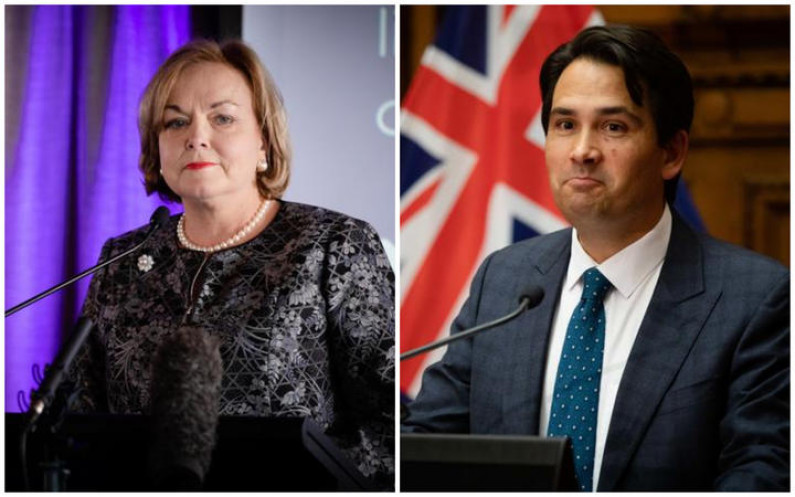 Former senior National MPs are weighing in amid chaos and turmoil in the party.

Judith Collins lost her National leadership yesterday after a vote of no confidence after she accused Simon Bridges of "serious misconduct". Photo: RNZ

National MPs will elect the party's fifth leader in four years next Tuesday, after a vote of no confidence went against Judith Collins yesterday.

The implosion comes after a late Wednesday night press release from Collins, where she accused MP and former leader Simon Bridges of "serious misconduct" at a party event in Premier House five years ago.

Collins was replaced by interim leader Shane Reti, ahead of a leadership vote on Tuesday.

Former attorney-general Christopher Finlayson said the events of yesterday were beyond human comprehension.

He hopes some of the key players - including Simon Bridges and Judith Collins - use the summer to consider whether their future lies in politics.

"I think there comes a time when people need to consider, it happened to me, whether or not their contribution to politics is complete and whether there are other avenues that they could pursue.

"Maybe Simon and Judith need to reflect on the events of the last 18 months and consider whether or not they should perhaps move on for the good of the party."

Finlayson said what has happened within the National Party recently has stopped some of its new candidates from being able to step into the limelight.

He said there are some very good people in the party such as Joseph Mooney in Southland, Nicola Grigg, Penny Simmonds in Invercargill, Andrew Bayly and Dr Shane Reti.

"I'd like to see some of these new ones shine a little bit more cause I think they've got a real contribution to make, the sort of contribution that people out there are wanting to hear from the National Party - they are sick of psycho-dramas, they just want to get on with it."

Finlayson said National now needs to have a "positive and courteous" campaign and to draw a line under what has happened once and for all.

He said it is for caucus to decide who becomes National's next leader but Christopher Luxon and Mark Mitchell, who have been mentioned as contenders, would both be valid options.

Finlayson said it is the country that matters and there are big issues that need to be considered in the future.

"You need a principled, talented opposition to provide an alternative vision, so let's not worry about individual careers or egos, it's the country that matters."

Sir David Carter, who spent more than 25 years in Parliament, has described the situation as a mess.

The former Speaker of the House says he would rather the National Party had sorted its new leader this week instead of waiting until Tuesday.

"Whilst I agree that the retiring, well firing of Judith was sudden, there's been rumours of leadership change going on now for weeks so I would have thought caucus was in the position to have a decent discussion today, unite behind one person and get on with it."

Sir David said they will now consider it further over the weekend and hopefully announce a leader on Tuesday and get on with the job.

Sir David would not endorse any particular candidate saying it was not his role and the responsibility for electing new leaders correctly lay with every member of the National Party caucus.

"You may well find that they spend the weekend talking to themselves and come up with a solution themselves that doesn't involve a ballot.

"All I'm saying to the National Party caucus members is get on with the job, find your leader, unite behind your leader and concentrate on your real job which is holding the government to account."

Sir David said the party's president Peter Goodfellow is an incompetent chairman of the board who has "overseen two election failures" and should go.

He said it would be difficult to want to vote for the party in its current state as the situation is a mess, but he hoped the party can sort its issues out.

Political commentator Lara Greaves said Dr Reti is holding the National fort for now, but he may not be the popular choice for National's top role.

She said that is despite the fact he has been in Parliament for seven years, been an Assistant Professor at Harvard and a rural GP for 17 years, as well as having strong community links.

"I think fundamentally the way that our politics works the most qualified candidate and the candidate with expertise for the current crisis is being overlooked."

Greaves said Christopher Luxon would be "a safe choice albeit very inexperienced".

She said that Christopher Luxon has only been in Parliament for a year and it has been a strange year due to the Covid-19 lockdowns and politicians not able to physically be at Parliament at times.

Greaves said he would also be up against ACT leader David Seymour who has become the de facto leader of the opposition, while Labour leader Jacinda Ardern has been in politics for 13 years now.

"So you're coming up against these two leaders who are popular, likeable in the polls, have a brand and identity already and that's a really difficult place to be in."

Greaves said polling shows that people view National "as good at the economy and economic recovery".

Perceptions of Luxon's economic abilities and his association with Air New Zealand will be a strength for National, she said.

Meanwhile, commentator Brigitte Morten who was also a senior ministerial advisor for the previous National-led government, said although National is not in a good position, the party has handled itself as well as it could by not rushing to make a decision on the new leadership.

She said the field is still wide open in terms of candidates.

Morten said the Collins era has shown that there are problems when you have a leader operating as a one person unit.

She said she wants to see the whole leadership team which includes the leadership, deputy and key portfolios such as health and finance.

Would Christopher Luxon be another Todd Muller?

He said the party should focus on avoiding "ongoing unhappiness and division in the caucus which has been part of its undoing".

"Electability" would be the main consideration when voting in a new leader, he said.

"For instance... they know that Simon Bridges can run an opposition party - he can deliver lines, he can set an agenda. What he can't necessarily do, based on his previous performance, win over swinging voters ... convince the people who voted for Helen Clark and then John Key and then Jacinda Ardern that National is actually their natural home.

"They might also look at the sort of hit job / smear job that was attempted by Judith Collins has had any effect.

"Christopher Luxon obviously has huge reps on him, has the right kind of story for a National Party leader - business success, he's a polished performer. But there will be questions, is this another Todd Muller? When it comes to fielding that 24/7 barrage of media inquiries and having to think on their feet, we just don't know he can do that yet."