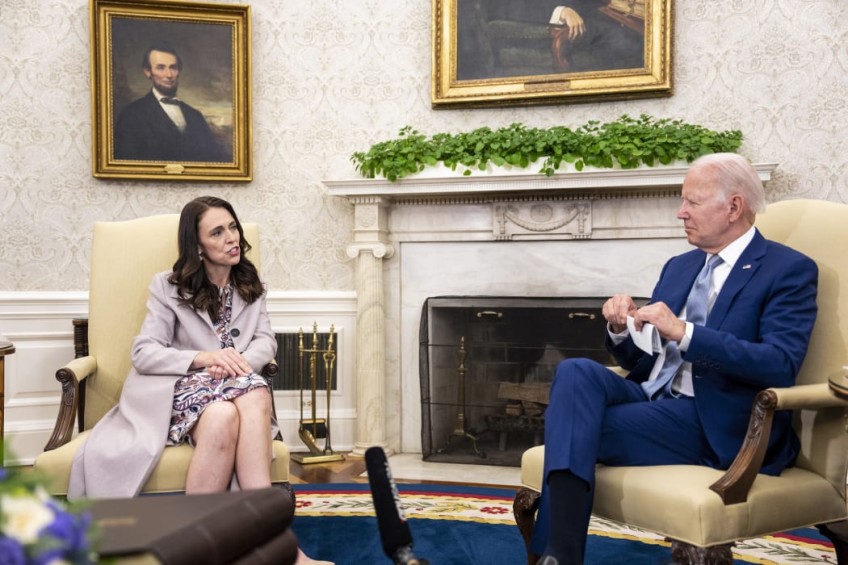 PM meets US President at the White House

Prime Minister Jacinda Ardern has met US President Joe Biden in the Oval Office, with the Pacific and Ukraine on the agenda.

It was the first visit to the Oval Office by a New Zealand Prime Minister since John Key met with Barack Obama in 2014.

In remarks ahead of the meeting Biden and Ardern spoke of the Ukraine, the Pacific region, the Indo-Pacific Economic Framework (IPEF) and climate change.

Biden said New Zealand had been one of the United States' closest partners with a "long history of friendship", and said two of his uncles served in the Pacific in WWII.

Ardern said she "really welcomed" the opportunity for the visit.

"We've spoken on several occasions ... we traversed such similar issues not least of course our shared history.

"You speak of your uncle's service in the Pacific. My grandfather served in the Pacific and I think that speaks to the personal connection, but also the depth of our friendship and relationship as two countries," she said.

"We last saw each other at the launch of the Pacific framework which is I think a fairly big deal for all of us," he said.

Watch: Jacinda Ardern on her meeting with the US President:

"Your leadership has taken on a critical role in this global stage ... galvanising action on climate change, global effort to combat violence, extremism online ...I want to work with you on that effort."

Biden referred to his visit to Texas after the shooting at Robb Elementary School in Uvalde, and said much of gun violence was preventable.

"I want to recognise New Zealand's significant support for Ukraine as a lot of Indo-Pacific countries are doing because this is more than just a regional war."

The prime minister expressed her condolences over the school shooting in Uvalde, Texas, while Biden said the work Ardern was doing with the tech companies, specifically with the Christchurch Call, was really important.

Jacinda Ardern and Biden exchange remarks ahead of their meeting. Photo: AFP / POOL

Biden emphasised that the US and New Zealand had to co-operate on issues including the Pacific. "We are not coming to dictate or lay down the law - we have more work to do in those Pacific Islands as well," he said.

After the meeting Ardern said New Zealand was happy to join IPEF, but wanted it to be meaningful. "We believe it can assist with the removal of non-tariff barriers and seed greater economic cooperation and integration."

The IPEF, proposed by the US, offers no tariff relief to the countries that join, but provides a way to sort through key issues from climate change to supply chain resilience and digital trade.

Ardern urged the president to join the Comprehensive and Progressive Agreement for Trans-Pacific Partnership (CPTTP) as "the best way the United States can support the economic resilience of our region.

The leaders released a United States - Aotearoa New Zealand Joint Statement: A 21st century partnership for the Pacific, Indo-Pacific and the world which re-affirms and commits to advance the strategic partnership between the two countries.

In a separate meeting, US Vice President Kamala Harris and Ardern welcomed the finalisation of negotiations of a Space Framework Agreement between the US and New Zealand.

The meeting took place as China's foreign minister was in Tonga as part of a region-wide tour, and followed news that Beijing had signed a security pact with the Solomon Islands as it makes a push to grow its influence in the region.

US Secretary of State Antony Blinken delivered a speech earlier this week framing the geopolitical battle with China, saying despite the Ukraine conflict the US would "remain focused on the most serious long-term challenge to the international order - and that's posed by the People's Republic of China".

The leadup to the White House visit was not without logistical challenges, with three members of the New Zealand delegation testing positive for Covid-19.