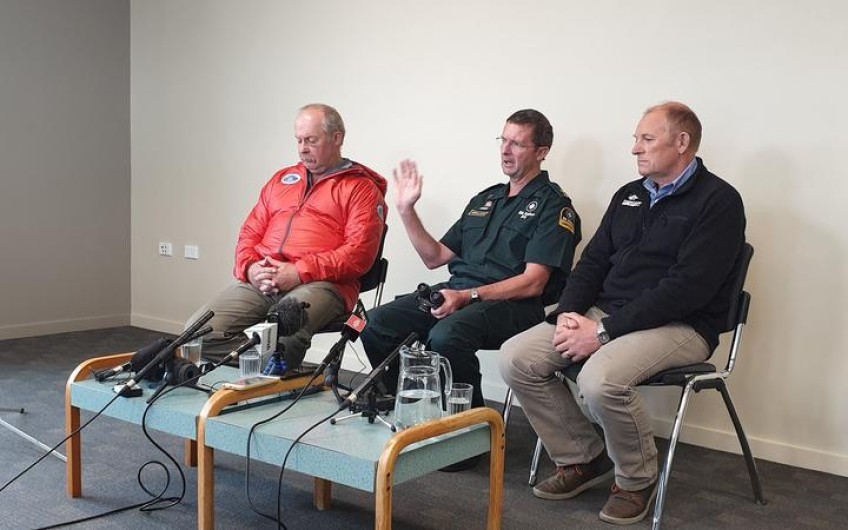 The men who survived a helicopter crash in the subantarctic ocean have spoken about how they survived, saying their training kicked in seconds after the crash.

Pilot Andrew Hefford, winch operator Lester Stevens and medic John Lambeth had been on their way to medically evacuate a person from a fishing boat when their Kawasaki BK-117 helicopter crashed on Monday night.

Mr Stevens said he didn't recall anything about the crash - the first thing he was aware of was being in the water and not knowing where he was or how he got there.

He had been dragged out of the submerged helicopter unconscious by medic John Lambeth. He said he would not have survived without help from other crew members.

Mr Stevens said the group knew early on that they were extremely lucky, but they had to be patient.

As they waited on the beach, they were concerned everyone at home would be worried sick, fearing the worst.

The combination of strong winds and sea noises made sounds like rotor-blades, but eventually they were real, Mr Stevens said.

"There was a fairly big sea running off in one direction and the wind blowing, and every now and then it combined to sound of a helicopter engine, which all of us heard several times, possibly due to wishful thinking. But eventually it turned out to be real, so that was great."

Mr Lambeth said his training kicked in within seconds of the helicopter crashing, but initially thought he might drown.

"My concern was just survival," he said.

He said they were heartened to hear sounds of the Defence Force Orion plane and helicopters searching for them.

The men were found on Tuesday morning on a beach on Auckland Island, about 450km south of New Zealand. They were wearing survival gear and lifejackets when the helicopter went down 3km from the islands, and managed to get ashore where they made a shelter to keep warm until help arrived.

A fishing boat spotted a door from the helicopter which helped narrow down the search area. The men were flown to Invercargill and walked unaided into Southland Hospital for checkups.

The cause of the crash is subject to three investigations by the Transport Accident Investigation Commission, Civil Aviation Authority and aircraft owners Southern Lakes Helicopters. The three men were interviewed earlier this week by Commission investigators.