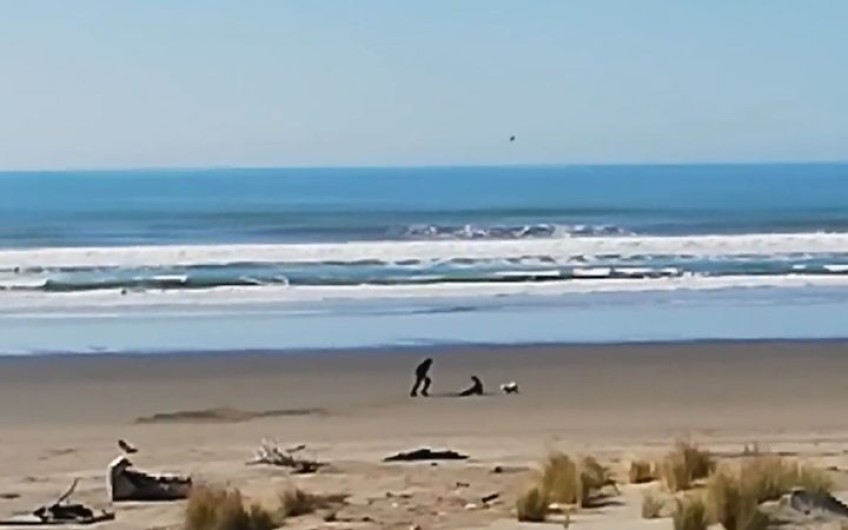 Footage of seal attack on Christchurch beach released by DOC

The owner of a dog that attacked a seal at a Christchurch beach is being sought by the Department of Conservation (DOC).

The small white dog with ginger markings was filmed by a member of the public attacking a New Zealand fur seal on The Pines/Kairaki beach, on Tuesday.

DOC has released footage of the attack on the seal, which lasted about five minutes before the owner was able to control his dog:

"We're seeking information about a dog attack on a New Zealand fur seal/kekeno at The Pines/Kairaki beach near Kaiapoi. A small white dog with ginger markings was filmed by a member of the public attacking the seal on Tuesday afternoon: Video link.

Biodiversity ranger Anita Spencer said DOC was appealing to the public for information in an attempt to locate the owner.

"We want to speak to anyone who may have seen the seal being attacked, or the dog and its owner on the beach around the Pines Beach area, mid to late morning on Tuesday," she said.

She said DOC realised the footage might be distressing but it wanted people to understand how easily a dog attack on a seal could happen.

"The consequences are almost always bad for the seal and dogs can be bitten as well," Ms Spencer said.

"The dog in this video is clearly not under effective control and we're disappointed this is yet another dog attack on a seal.

It recommended dogs be kept on a leash in areas where seals were present and be kept at least 20 metres away.

A screenshot of the footage released by DOC showing a dog attacking a seal. Photo: Supplied