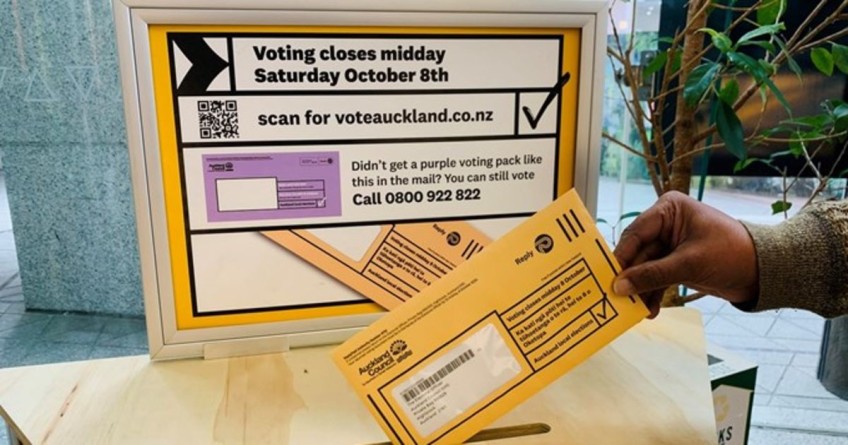 Low voter turnout in the council elections has fuelled calls for an overhaul of the entire local government voting process, including postal ballots.

Just 36 percent of eligible New Zealanders cast their vote in the elections compared with 42 percent in 2019, although this year's figure should increase slightly once the special ballots are counted, according to a preliminary analysis from Local Government NZ.

The association has called for an independent review of the voting system to improve participation across the country, although Local Government Minister Nanaia Mahuta is yet to commit to one distinct from two local government and electoral law reviews already underway.

"It's really disappointing to see such low voter turnout across the country. I think it's time we actually go back and ask some questions about what we can do to improve voter engagement," he said.

"I think postal votes, for example, are something that we've got to ask some serious questions about."

Local Government NZ chief executive Susan Freeman-Greene said there was a massive gap to bridge between turnout for local and general elections, despite publicity campaigns.

"Four out of 10 people voting in local elections just isn't enough. That really should be a bit of a wake-up call for us," she said.

"We've heard anecdotally that a huge number of voters are not even sure where their local post box is."

Freeman-Greene hoped a review would canvas options such as online voting, a national polling day and a more centralised administration system, in pursuit of a coordinated, national approach.

"We're looking for a short, sharp, independent review to focus on how we can make voting in local elections more accessible and easier to navigate," she said.

In a Saturday social media post congratulating the successful candidates, Prime Minister Jacinda Ardern said she was "keen to work with local government on how we make voting more accessible. Greater participation in elections is good for democracy!"

Voter turnout at the 2020 general election was 82 percent.

Local Government Minister Nanaia Mahuta said central and local government would review the processes around the election, as they did every three years, to make voting more accessible and encourage people to participate.

"Prior to the close of voting, I also noted that there will be a lot to learn after this election about how processes can be improved, for example the use of the postal system," she said in a statement.

"I will be talking further to Local Government NZ about that."

Mahuta said there was potential for the existing Future for Local Government and parliamentary electoral law reviews to address some of the concerns.

She said greater diversity among mayors and councillors was a bright spot in the elections, including 66 new Māori councillors and a slight increase in the number of women elected as mayors, to 23.

"A lot of people now no longer post letters or use paper, so I think that's a bit of a stumbling block," he said.

Ofsoske said the last-minute rush to cast special votes in Auckland was unprecedented, although it was difficult to estimate how many people did not receive voting papers.

"We had people snaking up the stairs - two flights - and then out the door and onto the street. I've never seen that before," he said.

"A large number of people simply had not updated their details with the Electoral Commission on the electoral roll so in many, many cases, their voting packs went to their old address so they simply did not get them."

Ofsoske said it was time to modernise the country's 20-year-old electoral legislation to encourage younger voters to take part in the democratic process.

"We've been agitating for a number of years for an electronic option, government has rejected that in the past so we'd really like to submit that again," he said.

Other options could include introducing polling places, a designated election day, or more collection options for postal voting, he said.

"We're fully supportive of a review, I think it needs to be wide-ranging," Watts said.

"We've got to make it as easy as possible for people to have their voice heard while not compromising the integrity or the accessibility of the electoral system."

In the major cities, voting was down 1.4 percent.