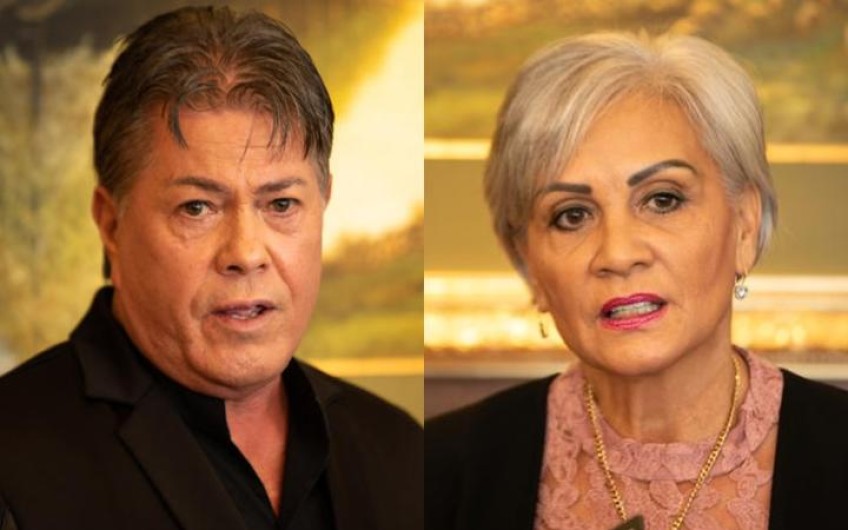 Destiny Church was forced to hold its service in Queenstown yesterday after authorities in Invercargill told them they couldn't use the city's venue.

Speaking to an audience of what they said was fewer than 20 people, Brian and Hannah Tamaki used the opportunity to chastise the media for bringing to light their late night exodus from Auckland in order to avoid the city's lockdown.

The Tamakis also lashed out at politicians and other churches for failing to come to their aid as news of their actions sparked nationwide outrage.

The only people who appeared completely blameless in the affair was the couple themselves.

And Brian Tamaki claimed criticism of their cross-country trip may actually have caused Friday's earthquakes and tsunami warning.

Kicking off proceedings, however, Hannah Tamaki appeared to welcome First Up along to the Sunday service, which was streamed live on Facebook.

"Nice to see you online, share this with all your friends," she said.

"And Matt, if you're online, welcome. Welcome to Destiny Church service online."

The pleasantries, though, were short-lived; followed as they were by accusations from Brian Tamaki of the media engaging in witchcraft and demonic behaviour.

"The media is the substitute for the preacher. That's why it's Jezebel, it's witchcraft. Gotta repeat that in case the media are watching. You're in a spirit of witchcraft.

"You dupe people - you put a spell through writing and you then begin to dictate the narrative to try and set up a culture of evil or a culture that takes it away from Christ, so they can bewitch a whole nation."

The Tamakis possibly showed some contrition for what took place last week.

"I will say things in the moment when I am in the Apostle, not Brian. Sometimes Brian gets it right a lot of the time and sometimes he doesn't," he said.

"But the Apostle, so that's the God in you ... will always speak life."

The majority of the service, though, consisted of Brian Tamaki slamming those who covered the story or criticised the couple.

He even blamed them for the recent earthquakes and tsunami warning.

"And so suddenly you get the biggest earthquake - I think one of the biggest in the history of New Zealand - that follows after the ravaging of Christ on the Wednesday.

"You can't tell me that's coincidence, don't tell me it's garbage. Come on, if we weren't persecuted that one day, you fellas had got that right, you could have an excuse to say there's no connection.

Bishop Tamaki also singled out broadcaster Hilary Barry for tweeting: "$100 says Jesus would have had the jab", after the Tamakis revealed they would not be getting the Covid-19 vaccine.

"Hilary Barry, she come out and she says in a tweet that Jesus Christ, he'll take the Jab. Jesus takes the jab. It was mocking," he said.

"All of the media hype and craze and discrimination and the whole South Island almost - well, not all of them there's some good South Island people. I love the South Island.

"But there are some demons in the North Island and in the South Island, I'm telling you, that ... need to be cast out."

Prime minister among those criticised

He went on to pour scorn on other churches and politicians for failing to come to the couple's aid.

"There was an opportunity for all the leaders of the Christian movements to have stood. Because that Wednesday, if you still don't believe me, was not about two people who were out there, just leaving Auckland. We represent a movement of raising sons of God," he said.

"Prime Minister Jacinda Ardern will go out of her way to protect the gay community. On Wednesday, she didn't lift a finger to protect the Christians from Destiny Church and others who were hated on."

Meanwhile, most other churches in South Auckland opted to remain closed yesterday, despite the city moving down to alert level 2, although some did offer socially distanced services with strict Covid-19 protection protocols in place.