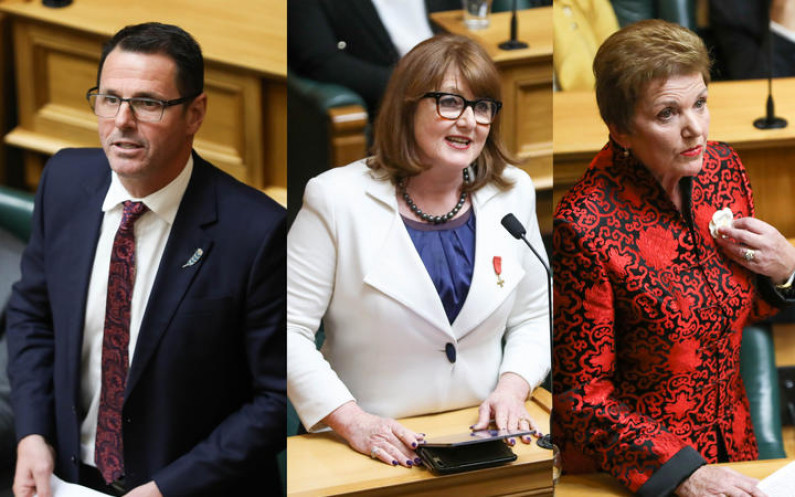 Departing MPs have shared their observations on parliamentary life describing it as a "crazy", "brutal" and "frightening" place.

An election year puts a lot of new faces in front of the public as eager citizens put up their hands to be Members of Parliament.

But it also means a lot of departures and it's tradition for resigning or retiring MPs to make a final farewell speech to the House known as a valedictory statement.

These statements often include thanks to family, friends, staff and colleagues, career highlights and lows, as well as aspirations for the country's future. But it's the reflections on parliamentary life which tend to reveal the true nature of the job. Three MPs have given their valedictory speeches so far and shared their views on the parliamentary environment.

Departing New Zealand First MP Clayton Mitchell said the last few weeks in politics had been crazy, particularly when he was mistaken for National MP Mark Mitchell and told he had support of the caucus for the leadership.

"I thought for a moment, "What's this about? How can this be?", and I was taken back until I realised that they'd called the wrong Mitchell," he said.

"They hadn't cottoned on quite as quick as I did, and I was quick to say, "You should be calling Winston. He'd be a great leader for you guys." At which point, they went, "Ah. I thought this was Mark Mitchell." Crazy times, and I don't know what's next. I don't think anybody could guess."

Mitchell said it was hard to believe how quickly the past six years had gone by.

"It just seems like yesterday I was standing in the House for the first time, doing my maiden speech, as I've already said, talking about all the things that matter—and still matter—such as fixing the Resource Management Act (RMA), building roads, pushing for a single standard of citizenship for all New Zealanders, stopping the wholesale selling off of our State assets, building better internal capabilities for manufacturing and processing to add value to our exports to create wealth for Kiwis, and, of course, controlling immigration. "I haven't finished with helping out achieve those goals yet. There is much more that needs to be done and much more that we can all still do to make these things happen."

"At its best, I think this Parliament delivered in a way that our team of five million New Zealanders can be very proud of," she said.

"But at its worst, being in Parliament can be frustrating, dehumanising, and brutal. As we've all been reminded recently, the pressures that come with the privilege of being in the service of the public can take a heavy toll on MPs and on their families.

"Please don't be too quick to judge. It's a tough life in here, tougher than you might think from the outside, and I think that the long hours and the unrelenting 24/7 scrutiny adds up to the sort of life that doesn't suit everyone."

'I spoke to staff who were genuinely frightened' - Anne Tolley

National MP Anne Tolley acknowledges the artist of the white camellia brooch she's wearing. The flower was worn as a symbol of support for women gaining the right to vote in New Zealand. Photo: VNP / Daniela Maoate-Cox

National MP Anne Tolley is the 74th woman to be elected to the New Zealand House of Representatives.

During her valedictory speech she acknowledged career highlights and people who had supported her since she was first elected in 1999.

This Parliament she served as Deputy Speaker of the House and chaired a working group to create a code of conduct for Parliament.

"Anybody who works here or out in our electorate and community offices has the right to feel safe and respected. It's a tough environment—we all understand that—but that's no excuse for some of the behaviour that we know takes place.

"I spoke with staff who were genuinely frightened to come to work at times. I spoke with MPs who were bullied by colleagues and tolerated sexual harassment as part of the job. None of them had any expectations that something could be done about such behaviour. Well, that is simply unacceptable.

In her speech Tolley said they didn't quite manage to finish their work but did report back seven statements of expectation of behaviour to the Speaker Trevor Mallard.

to show that bullying and harassment, including sexual harassment, are unacceptable; to act respectfully and professionally; to foster an environment where people feel safe and valued; to behave fairly and genuinely, treating others the way we would like to be treated; to use our position of power or influence to help others and avoid harm; and to speak up if we observe unacceptable behaviour.

"I sincerely hope everyone in the next Parliament commits to these expectations, because—I tell you what—the public expects nothing less." she said.

Mallard has since released a code of conduct for Parliament that he wants all parties to sign up to.