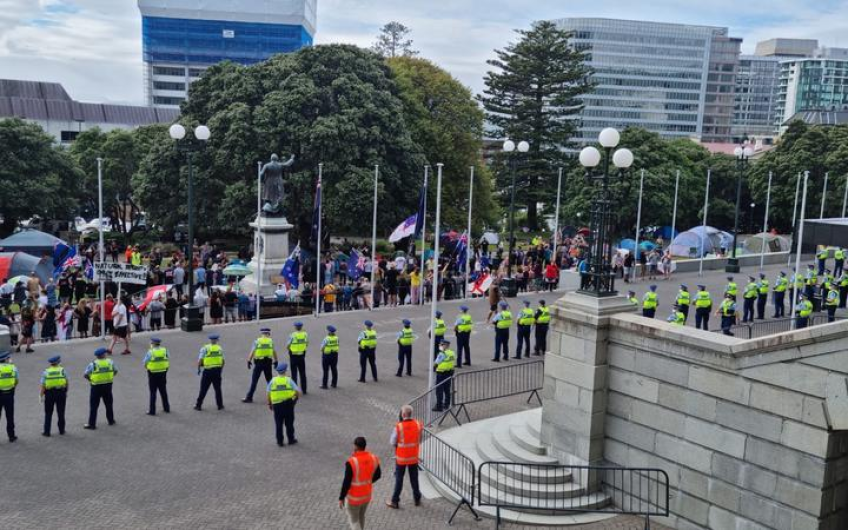 More than 50 police have formed a ring around the front of Parliament edging up to a line of protesters who have linked arms lining up in front of the cenotaph.

The group is part of a convoy which travelled to the capital yesterday to protest against Covid-19 vaccine mandates.

Steel barriers have been put up in front of the protesters.

The crowd was still largely peaceful but some were heckling police and the temperature was starting to rise.

Protesters who spent the night camped on Parliament grounds have been warned they could be issued with a trespass notice.

About 1000 people and hundreds of vehicle converged on Parliament grounds yesterday, and at least 100 people camped overnight.

Trucks and other vehicles are blocking Molesworth Street.

Police issued a statement late last night saying they were monitoring the situation and were talking with the Speaker of the House Trevor Mallard.

More than 50 police have formed a ring around the front of Parliament edging up to a line of protesters who had linked arms lining up in front of the cenotaph.

Protesters have been given a letter from the Speaker setting out Parliament's rules, which prohibit staying overnight on the grounds and ban tents or other structures.

Specific policies mentioned in the letter include leaving the grounds in an orderly manner and not interfering with traffic.

"Participants must assemble within and disperse from the grounds in an orderly manner, and so as to not interfere with the flow of vehicular traffic."

It also mentions that tents and structures are banned from the grounds.

"No erection of tents or any structure is permitted other than hand held signs ... structures including tents as mentioned above are not permitted and if not removed when requested, are liable for confiscation."

It said if the rules were breached people could be trespassed and their equipment confiscated.

"In line with these existing policies, please disassemble any tents or structures and remove them from the grounds. Do not continue protests or demonstrations on the grounds after dark. The breach of the above policies and failure to carry out the actions may result in trespass notices being issued."

There are also campervans parked in nearby streets and the police say Molesworth Street in front of Parliament is not accessible to traffic, and drivers should avoid the area this morning.

It is not clear how long the protesters will be allowed to stay.