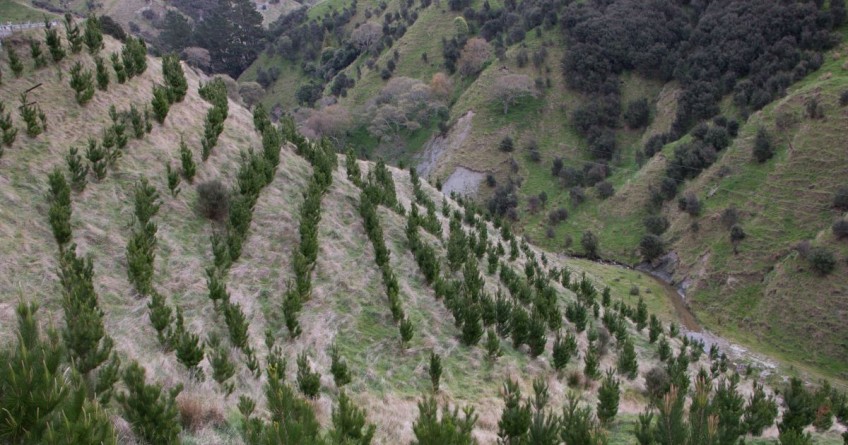 A report from the Parliamentary Commissioner for the Environment has found a very large number of pine trees would need to be planted to make a significant dent in farming emissions.

The report says 770,000 hectares of new pine would need to be planted by 2050 to achieve the temperature reduction that cutting methane emissions by 10 percent would achieve.

Upton said: "This is certainly not a the silver bullet."

"But [it] can provide a part of the solution, that's about as much as I think can be said."

Using forestry to offset a fraction of the warming might be possible, he said.

'Offsetting with trees should be a last resort' - report

The report makes no recommendations.

Upton said the aim of the paper was to lay out what could be credibly claimed about offsetting methane from livestock in the hope of fostering better informed debate.

He said it personally never made sense to him why agriculture was not allowed to buy forestry credits but other emitters of CO2 could.

Forests remove carbon dioxide, not methane, from the atmosphere.

Upton stressed the report in no way advocated planting trees instead of reducing methane emissions, and the priority was cutting the amount of emissions of all damaging gases going into the atmosphere.

The report said: "Given the need to make deep reductions in all emissions, offsetting with trees should be a last resort that is used only when all practicable means of reducing emissions at source have been exhausted.

"If forestry is used to offset livestock methane, it should only be used in addition to - not instead of - gross emissions reductions."

Upton said he commissioned the report to learn how forestry offset could be used to go beyond New Zealand's climate goal to cut agricultural methane by between 24 percent and 47 percent by 2050.

The report said planting on such a large scale could have benefits but also adverse economic, social, cultural and environmental impacts, and if not done carefully there was a real risk the negative would outweigh the positives.

Based on the metric used in the report, it said planting trees to offset biogenic methane did not lock land up permanently in forestry because if methane emissions were reduced over time the land could then be used for something else.

Livestock methane accounts for about 55 percent of New Zealand's warming, with the amount being released plateauing in the past two decades.

The report used a warming-based approach to crunch the numbers.

This metric is different from the one New Zealand uses to report its emissions internationally, and what is used domestically.

There is disagreement among New Zealand climate scientists about the approach.

Upton said the report stood on its own merits and was not about differences in the choice of metric.