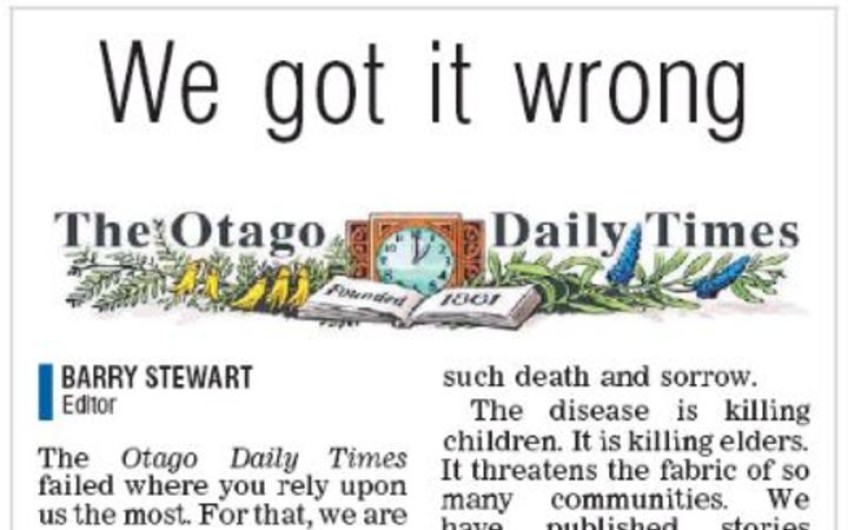 A deeply inappropriate cartoon in the Otago Daily Times sparked demonstrations at the paper's door this week as well as discontent among the paper's own people. It reminds all editors contentious content needs careful consideration before publication.

In a front-page editorial under the heading We got it Wrong ODT editor Barry Stewart declared the cartoon was "significantly more than crass and insensitive - but deeply offensive and distressing".

That now-notorious cartoon by Garrick Tremain in the paper on Tuesday showed a woman leaving a travel agency saying she’d been told the "least popular spots ...  were the ones people are picking up in Samoa."

At that point the measles outbreak had already claimed more than 50 lives there.

On Friday, the paper said its top executives had met members of the Samoan community in Dunedin and discussed "ways we can make amends and help the people of Samoa".

Mr Stewart said they were consulting people for training in "cultural intelligence and unconscious bias" and responding to more than 1000 letters and complaints.

But it took two days for Mr Stewart and the ODT to get to that point.

When the paper first responded to the backlash after the cartoon appeared in print on Tuesday, it was with two simple lines on its website expressing regret.

A fuller apology from Barry Stewart  - in which he acknowledged "a deeply regrettable error in judgement" - appeared later in the day.

The apology for the deeply unpopular cartoon became - ironically - the paper’s most popular online item that day, while the terms 'ODT' and 'Tremain' were trending on Twitter ahead of 'Samoa'.

The apology appeared next to the paper’s editorial on Wednesday morning's edition too, though it was hard to spot unless you were looking for it.

But you couldn’t miss the protest if you were outside the ODT  building in central Dunedin that day.

Mr Stewart told protesters - and waiting reporters - he was "professionally embarrassed" and had hurt his own colleagues - hard things to for an editor to say in public - but those protesters were bothered by the feelings of those suffering in Samoa.

They were clearly not front-of-mind for the Queenstown-based cartoonist Garrick Tremain when he used the situation as simple backdrop to a punchline.

And it didn’t take much imagination to work out how they felt.

"Adjusted for our relative size, imagine if hundreds - maybe thousands - of babies had died in New Zealand, and an Australian newspaper made a joke about it," a former editor of The Listener, Finlay MacDonald, said on Facebook on Tuesday.

“I don't think these clowns get it even now,” he added.

The artist himself didn't seem to when he told RNZ's First Up the cartoon was "just a stupid joke" about a travel agent’s ignorance - and the cartoon itself was merely "innocuous".

He also said that as a New Zealand taxpayer covering the cost of emergency assistance there, he was helping the situation in Samoa.

It didn't seem to occur to Mr Tremain that measles deaths ought to override nailing a pun about 'spots' for a cartoon.

He confirmed he was aware the measles crisis was a big story when he drew the cartoon - though he said he wasn't aware it would be a big story in the paper that same day.

Mr Tremain did apologise later on his personal website on which he is described as "highly regarded as ... New Zealand's funniest and most perceptive political cartoonist".

Those are not adjectives many people have used to describe him in the media this past week.

Some critics claimed this was an accident waiting to happen.

Mr Tremain has annoyed people in past cartoons with his take on sensitive subjects like race and gender - including journalists at the ODT. Some of them used their private social media accounts this week to criticise his cartoon - and the decision to publish it.

So did several journalists elsewhere in the media.

"It’s going to be very difficult for the ODT to remove him after its 'review' without at the same time the editor resigning, given the multiple egregious decisions to publish his trash," Ms Chisholm wrote with #Trexit.

Outside the ODT  building last Wednesday, Mr Stewart told the protesters he took full responsibility and there would be no more Mr Tremain contributions for now.

That drew applause but it was only a temporary move pending a review of how the cartoon ended up in the paper.

It remains to be seen whether Tremain cartoons will appear in the paper again and what that 'review of procedures' at the ODT will reveal.

ODT editor Barry Stewart won't comment on that - and what he called “an employment review” - until they’re complete.

But in the frontpage apology on Thursday he also said daily cartoons would now be "considered and debated by our broader editorial team" rather than being simply "the preserve of the editor".

But in the meantime the unanswered questions include:

Was there any editorial debate about whether to publish the cartoon?

And how often in the past have Tremain cartoons - or those of other artists - ended up in the bin and not the editorial page?

It’s sad that some coverage of the crass cartoon has become more widely read and shared than the comprehensive and compassionate coverage of the crisis itself by reporters in Samoa for RNZ, Samoa Observer, Stuff, TVNZ, and Newshub and other outlets.