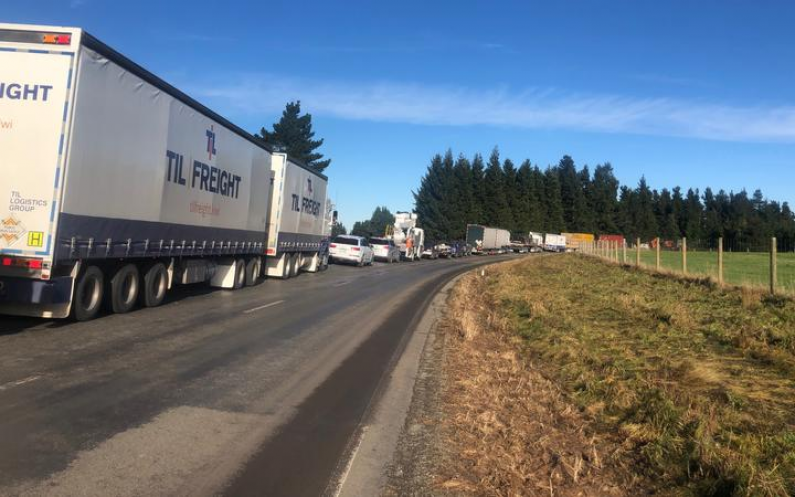 The Ashburton River Bridge has been reopened to light vehicles only after delays to heavy-vehicle testing this morning.

A buildup of trucks on the Arundel-Rakaia Gorge Road which bypasses SH1 through Ashburton. Photo: RNZ / Ella Stewart

Last night, strength testing of the "slumping" Ashburton Bridge proved positive, and it reopened to light traffic shortly before 10pm.

Further testing was due to be carried out at 10am to see if the bridge, which is part of State Highway 1, could carry heavy vehicles, after reports of slumping yesterday.

But delays in the testing have meant the bridge has now reopened to light vehicles only, with a 30km/h speed restriction.

Two alternate routes are in place around Hinds for drivers travelling south.

Typically, there would be 21,000 vehicles going over the bridge on a weekday, peaking at 30,000 vehicles per day on weekends.

"Basically the pier has settled about 130mm on one side, and 110mm on the other. So obviously the deck and the superstructure has settled with it.

"What we've been load testing last night which allowed light traffic over was to make sure there's no more movement and we're not stressing obviously the deck either side of the damaged pier.

"We've got to be careful what happens there at this stage."

The hope is to take the heavy vehicles across on a single lane at a time. It would be better if two lanes could operate but it is still too early to make that call, Connors said.

The damage was caused by a significant build-up of debris in the river around the piers immediately to the north, and as flow dropped from 1500 cumecs to about 400 cumecs of water, debris got caught up in adjacent piers and all the water was directed to the pier that's sustained the damage.

Some underpinning will probably have to occur, perhaps by getting onto the riverbed and driving piles and pinning it that way. Engineers will need to access the area first and the repair work will come later, Connors said.

"We've got our people working on that right now."

The re-opening of the bridge was an important psychological boost for Mid-Canterbury, Ashburton Mayor Neil Brown told Morning Report.

It meant Ashburton could re-connect again with Tinwald and areas further south.

"Having that separation - it just puts a different perspective on things. It depends on which side of the river you were stuck on determines how you're feeling - now we're connected it's good."

He said while townships in the region were doing fine the priority would be fixing rural roads, some of which remained impassable.

He was pleased that while the problems with the SH1 bridge in Ashburton were being sorted, an inland route was established for heavy vehicles yesterday and they were using it within hours.

However, it adds one hour 20 minutes on a trip.

Ashburton is a rural support town and the Rural Support Trust and the Ministry of Primary Industries have been based at the emergency operations centre that's coordinating recovery efforts.

Both agencies would be fully involved helping farmers recover from the disaster, he said.

It will be important to help farmers with their immediate needs over the coming days.

"Some of them still have some water flowing through their paddocks from the [Ashburton] river so that river needs to be put back where it belongs and support given to those farmers to get then back up and running to as near as possible as we can."

Heavy equipment is already on hand to undertake the work that will be needed to correct the flow of braided rivers that have gone into new channels.

He said it's not a huge task because the river's normal flow is only 10 cumecs.

The bridge across the Ashburton River at Pudding Hill. Photo: RNZ / Conan Young

Two boil water notices are in place in small areas and it may be three to five days before they can be lifted and water supplies can return to normal, Brown said.

The government's donation of $500,000, announced yesterday, was a good start. Prime Minister Jacinda Ardern told him during her visit to the region that more funds would be available if needed, he said.

National leader Judith Collins said the government was not doing enough in terms of financial support for the recovery of the region.

"Particularly when you consider it wasn't that long ago, that [Speaker] Trevor Mallard spent more than that on putting a children's slide in Parliament grounds. It is actually insulting to the people of the area.

"But I also realise with the flooding starting to go down a little bit and retreat, more damage will become obvious, it will be a significant event in terms of clean-up and rebuilding, particularly for the people of Ashburton."

The bridge's closure has been a "logistical nightmare" for a supermarket just a kilometre from central Ashburton.

It has been cut off from supplies from the north.

Residents on the Tinwald side of the bridge were also cut off from every other supermarket except for the Tinwald SuperValue.

A co-owner of the Tinwald SuperValue, Gaylene Thompson, said her shelves were bare this morning, however, thanks to some suppliers and the Army, six pallets of stock were delivered last night.

A priority is finding some meat and she has limited bread, she told Morning Report.

Toilet paper, baby formula and bottled water ran out yesterday but she has since been resupplied.

"We're just working with every supplier to see what we can achieve."

It was great news that another inland route has re-opened for trucks. Suppliers ion the bottom half of the South Island were also doing everything possible to help send stock to the region, Thompson said.

"There's lots of people working behind the scenes..."