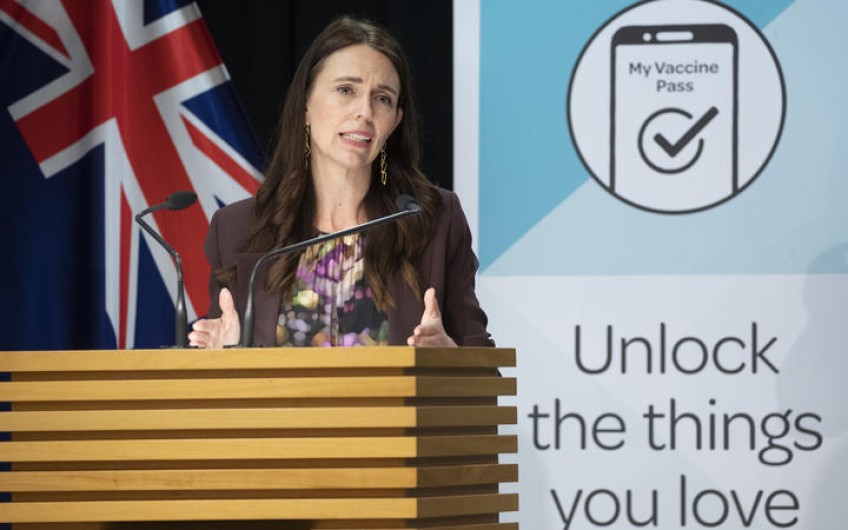 Auckland and other regions to Orange - Northland to stay Red

Prime Minister Jacinda Ardern has announced Auckland and all other red regions, excluding Northland, will move to Covid-19 framework setting orange at 11.59pm on Thursday 30 December.

It comes after Cabinet met today to consider whether any regions would move to a different setting under the new Covid-19 Protection Framework, which came into effect 10 days ago.

"Cabinet has also decided those remaining areas that are currently in red, excluding Northland, will also move to orange at the same time," Ardern said.

The move was to ensure those other red regions - Taupō, Rotorua, Kawerau, Whakatāne, Ōpōtiki, Gisborne, Wairua, Rangitikei, Whanganui and Ruapehu - had time to bring up the vaccination rates.

"We have carefully balanced the range of advice, views, risks and opportunities of all the relevant levels and settled on an outcome that means the country will move into the New Year with all but one region in the orange setting," she said.

"It means vaccine passes will be in use up and down the country, as well as masks and other public health measures that are designed to keep us safe during this time of change."

Ardern said ministers considered several factors when deciding whether or not to move regions into different levels in the traffic light system, including vaccination rates, health system capacity and the status of the current outbreak."

"It is encouraging to see Auckland's case numbers have continued to decline since the new framework came into effect giving cause for curious optimism," she said.

She said they were all lower than the 200 a day that modelling in early November showed.

"This lower number of cases in Auckland is good news for all of us as it reduces the risk of the virus spreading outside Auckland once the boundary changes on Wednesday."

"Case numbers, new hospitalisations and new cases in ICU are running slightly under the levels predicted.

"The R rate, which is indicative of the pace of spread slowed to under 1 for the first time in several months on 1 December."

Ardern said over the past two weeks vaccination rates had also increased. "As a country, we are now just 47,527 vaccinations away from hitting 90 percent fully vaccinated. We should hit that milestone in the middle of this week," she said.

Most places outside Auckland that have not yet reached 90 percent vaccination rates, would reach the mid-to-high 80 percent by the end of December, she added.

The next full review of the traffic light system will be in the week of 17 January.

The prime minister said New Zealand residents and citizens in Australia would be able to travel back home on 17 January and instead of going into MIQ, would be able to isolate at home for seven days. But, she said, ministers would receive further advice on the Omicron variant in early January to ensure this decision was the correct one.

"This check-in will be to confirm that we remain comfortable with this next step in our reconnecting work.

"I won't pre-empt the outcome of the check-in now, but it makes sense to ensure we assess the next move against all the latest information and advice we have, including the relative effectiveness of the vaccine against the Omicron variant.

"Our view is that we'll know even more than that on first week of January. So it makes sense for us to review that information and then confirm comfort or if there is something to alarm us, then being willing to speak to that as well."

Director-General of Health Dr Ashley Bloomfield said the Pfizer vaccine did "seem to have a good level of efficacy against the Omicron variant, especially with that third dose".

"Our key objective is to go into winter with our maximum population immunity," he said.

By Christmas, 450,000 people would be due for their booster shot.

He advised those who had taken their second vaccine dose six months ago to get a booster in order to gain full immunity.

Bloomfield also said Pfizer had indicated that the time between the second dose and the booster shot could be brought down to three months, if there was a large outbreak or during winter.

A large number of New Zealanders would be due for booster shots in March, April and May, Ardern added.

The prime minister reminded unvaccinated people that a negative rapid antigen test result would also be accepted when travelling after the Auckland borders reopened this Wednesday.

Police in Northland would decide which cars to check "ensuring we don't have a large hold up of vehicles" and others could legitimately help, so long as police were present, she said.

"Ultimately, it is operational so I won't be dictating how they [police] undertake them.

Northland needed more than 4000 people inoculated to get to the 90 percent vaccinate rate.