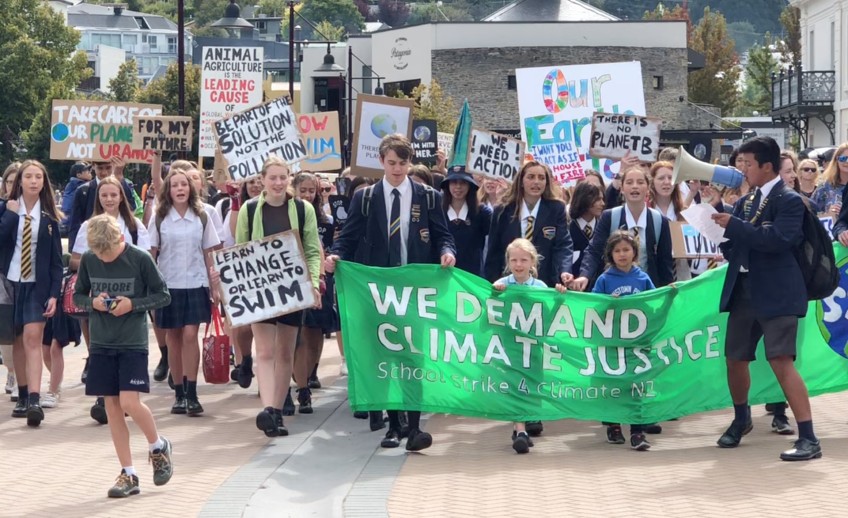 Students march in Queenstown and Wanaka for climate action

Students from primary and secondary schools turned out in force today in both Queenstown and Wanaka to call for more action on climate change.

The Queenstown march attracted up to three hundred people who protested from a rally point in Queenstown gardens right through the busy centre of town, attracting mainly positive attention from both residents and tourists.

The protests are all part of a global student climate change initiative that started in Sweden.

One of the march organisers, Olivia Waters, told Crux that the students from Wakatipu High School felt they needed to act in order to pressure politicians to take more action to control climate change. Asked for her response to critics who said it was irresponsible to take time off school to protest she said "If we wait until a time when it is responsible it may well be too late. We all need to take action now - both in New Zealand and around the rest of the world. This is as much a problem for us as it is for larger more industrialised countries."

The Queenstown march was orderly and well organised.

However one member of the public went out of his way to make it clear he disagreed with the student protest.

Here's our interview with one of the Queenstown organisers, Olivia Waters, speaking to Crux before today's protest march.

Here's the full media release from the Queenstown student organisers.

"Tens of thousands of school students from over hundreds of schools in dozens
of cities and towns will join students from around the world to go on strike from
school on March 15 over political inaction on climate change.

The school strike movement was kicked off last year by year 8 students in
Central Victoria, Australia who were inspired by 15 year old Swedish student
Greta who started striking in August 2018 and now strikes every Friday.
We at Wakatipu High School feel it is our responsibility as part of the next
generation to act in solidarity, and help to call all attention we can to the plight
of our environment.

As students, we aren’t of legal voting age, and we feel that
the media attention a strike draws is one of the most viable options we have to
make our voices heard by those who are in positions of authority. We are
particularly lucky to live in a place that has so much clean water and fresh air,
and we believe that to wait ‘until it’s our turn’ to be politicians and business
leaders is unviable if we are truly committed to preserving them, given the dire
predictions of scientists.

Gracie Hansby, Head Girl at Wakatipu High School said, “Global warming is
threatening our beautiful planet. The buildup of greenhouse gases within the
Earth’s atmosphere will prove detrimental if we don’t take immediate action. It is
important that we, as the younger generation, understand what is happening
and stand up for a cleaner and greener future. Strike for climate is our way of
showing the world that we will not stand by and watch the ice caps melt, species
die, and rising sea levels destroy homes. I think it is important to protect the
earth that we know and support the fight against climate change even if it
means we miss a period of class time .”

Student organiser and Deputy Head Boy Thomas Hartono said " Regardless of
whether people agree or disagree with the strike, climate change is a topic that
connects us all and it is being raised publicly around the globe. Through this
strike, we are not only expressing our concern of the future to the older
generation but also to the future generations and youth to start taking action
and play their part in the solution. If we want to find an answer to this problem,
we need to act now and it can only start if everyone plays their part."

In conjunction, the student body taking part in the strike would also like to thank
Wakatipu High School and its staff for how the strike has been handled. We
understand and appreciate the difficult situation that an issue such as this
presents for faculty, and acknowledge that there was no perfect choice in what is
this unusual scenario. In particular we would like to acknowledge our Principal,
Mr Hall and the number of staff who cycled to school today in solidarity. We
have had a great deal of support from teachers and thank them for allowing us a
space to plan and organise, and giving us access to official school channels to
spread awareness."