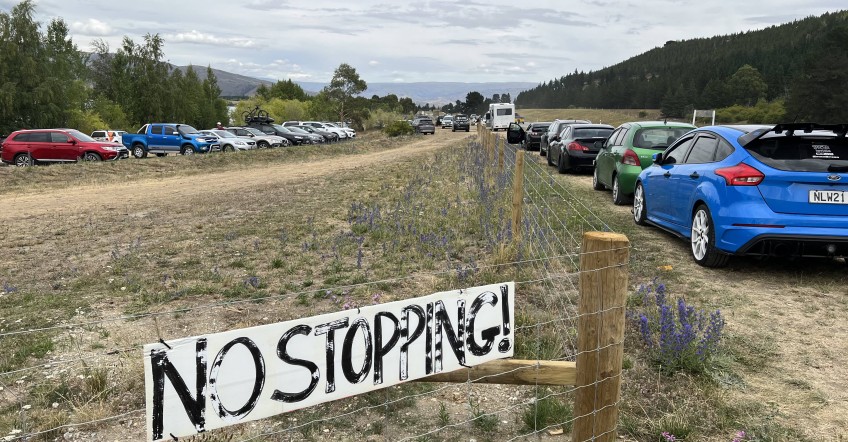 A crash at Lowburn this week was the result of an overseas driver travelling down the wrong side of the state highway after confusion about where to enter the Kiwi Water Park.

Police in Cromwell say the two-vehicle crash on Tuesday is the latest in a series of minor accidents at the site.

“There has been an issue with some minor nose-to-tail crashes and near-misses with drivers not paying enough attention when trying to find somewhere to park.”

On Tuesday, the visiting driver pulled across the road to the water park, before realising he couldn’t park there and needed to go to the allocated parking area further along the highway, police say.

“When he pulled out onto State Highway 6 he drove up the road in the incorrect lane.

“Both he and an oncoming vehicle took evasive action, both pulling completely off the road, before colliding.”

Crux has spoken to the driver of the other vehicle, who says they’d just pulled out of Lowburn Valley Road onto the state highway and hadn’t gathered much speed yet, which they considered to be lucky. 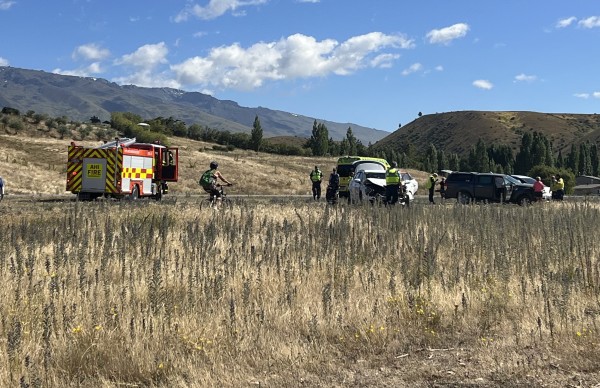 Both vehicles in the January 17 crash were badly damaged.

Police say the offending driver has been summonsed to appear in court for careless use of a motor vehicle.

Meanwhile, the agency in charge of the country’s state highways says its talking to the water park operator about improving signage at the attraction.

“We have received one complaint from a driver who observed two separate near misses, cars going in opposite directions each time, as drivers tried to turn into the waterpark at the wrong place, possibly due to inadequate signage.”

However, conversations with local people have confirmed these concerns are held by others also, he says.

“Signage, for example directional towards the car park area, may be able to be improved at the site. We will be discussing this with the operator.”

In December, Waka Kotahi spent approximately $350,000 on a turning bay into the increasingly popular public reserve at Lowburn, used by campers, boaties, and cyclists in additional to water park users, to alleviate traffic safety concerns.

“Overall, the right turn bay has been observed by Waka Kotahi staff over the Christmas period and seems to be mainly operating well."

A spokesperson for the Central Otago Disitrct Council, who in 2020 approved a six-year resource consent for the water park, says any issues caused by traffic stopping at the water park are for Toitū Te Whenua Land Information New Zealand (LINZ) and Waka Kotahi to address, and that’s happening.

“The council will be kept informed of the discussions.”

A condition of the resource consent is that a map be provided with each booking directing water park users to park at the reserve and walk to the attraction.

The resource consent says customers must be advised that no access to the water park is available off the state highway and stopping along it is prohibited. 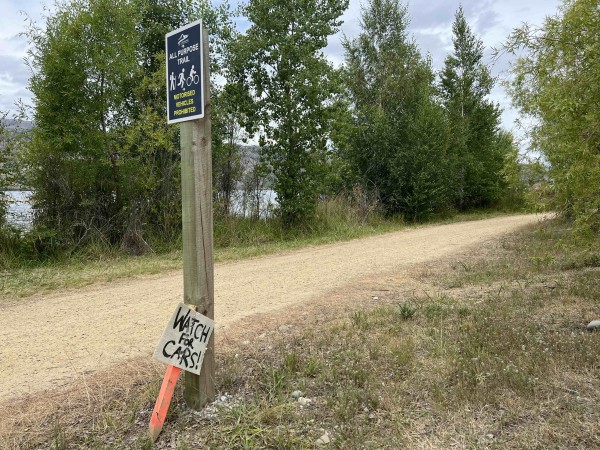 A homemade sign by the Kiwi Water Park advising pedestrians and cyclists on the Lake Dunstan Cycle Trail to 'watch for cars'.

However, during the holiday peak, hundreds of cars stopped and parked at the waterpark, rather than at the reserve as advised.

Sonya Wikitera, the head of Crown property at LINZ, the authority in charge of the lakebed and land between Lake Dunstan and the highway, says it’s aware of the parking problem.

“We have contractors in the region who are monitoring this and keeping us updated."

LINZ issues a permit each year, separate to the CODC’s resource consent, that allows the water park to set up shop on the lake.

It’s a requirement of this permit that the operator “instruct and encourage” all customers to park at the Lowburn car park, and not at the water park itself – and, it’s the same deal for staff - she says.

Police say it’s not an offence to park at the side of the road, as long as drivers are well back from the roadway and it isn’t marked as a no-stopping area.

Main image (taken January 4): Despite advice from the operator to park at a public park a few hundred metres away and walk, hundreds of visitors to the Kiwi Water Park are pulling off the state highway and parking on the road edge closer to their floating destination instead.