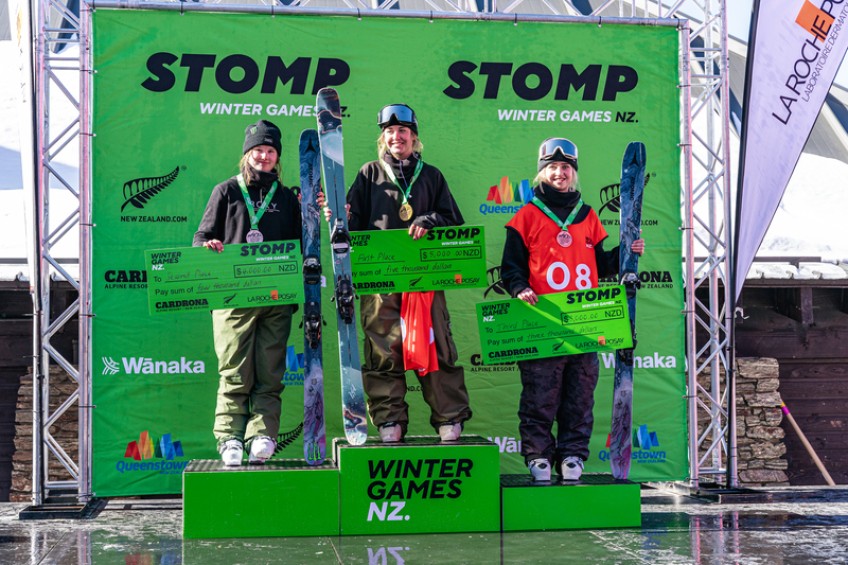 From the Winter Games:

The Cardrona STOMP Big Air presented by La Roche-Posay got underway at Cardrona Alpine Resort today with skiers and snowboarders throwing down on the Big Air jump. With perfect weather conditions and a start list featuring World Champions and World Cup, X Games and Olympic Games medallists the stage was set for a heavy-hitting competition.

The two-day STOMP series, presented as part of the Winter Games NZ, incorporates two separate events: today’s Big Air event in which competitors were judged on the style and technicality of their tricks, and the Park Jam which will be held in a purpose-built rail garden, designed to provide athletes with the opportunity to show off their creativity and style. The event is invitational and the innovative competition format has been co-designed with athletes to ensure they can showcase their incredible talent.

The Big Air competitors took four laps on the jump and were given a combined score for their best ‘style’ trick and best ‘technical’ trick. New Zealand Olympian Finn Bilous described what this brought to the competition.

“I think with the format change today the style component really changed things up from the traditional Big Air where it’s usually just based on technicality and amplitude. I think it’s easy to get caught up in the technical difficulty side and forget to put time into that style aspect. We’ve really seen a different result from what we might have anticipated if it had been a traditional Big Air. It’s really cool to be a part of it and I’d like to see more of it in the future.”

Canada’s Max Moffat was the top scoring athlete in the men’s skiing. More of a slopestyle specialist, Moffat was also a fan of today’s experimental competition format.
“It’s pretty unexpected to win, honestly. I don’t really consider myself a Big Air skier but I’m super down with this format. You’ve got to bring both style and tech to the table which is super cool and it works better for me, I love it.”

For his technical trick Max landed a double bio 1620 safety grab to Japan grab and for his style trick a cork 180.

Finn Bilous landed in second place in men’s ski, managing to improve his score on his very last run.

“We only had one run left and my lowest score was for my tech trick so I went to improve that,” he explained.” I got the grab a bit better and managed to up my score and land in second place which I’m really stoked about.”

Cardrona local Jackson Wells, a 2017 X Games medallist who has been retired from competition for the last two years, was enjoying being back in the bib today, and even happier to find himself finishing on the podium in third place.

Canada’s Olivia Asselin was a last-minute entry in today’s competition having only arrived in New Zealand two days ago. Crashing her first two attempts at the left double 1080 for her technical trick, she managed to put her fears aside and get the job done on her final attempt to finish in first place in women’s freeski.

“It’s my first time hitting the big jump this year so it was pretty scary,” she said after the event. “I’m feeling really good about that last jump, I was pretty scared to do it again. I tried it twice before and crashed twice, I went a bit too big but I laced it on the last try.”

Known for her progressive style in women’s freeski, Asselin showcased this today, landing a rodeo 540 with safety grab to shifty for her style trick.

Four-time X Games medallist Miyabi Onitsuka (JPN) had plans to up a frontside double 1080 to a backside double 1260 for maximum points on her technicality score but struggled on the landing for her first two attempts. She finally stomped the frontside 10 on the third try and backed it up with a clean frontside 360 indy grab for the win in the women’s snowboard category.

“I wanted to try the front double 10 and then back double 12 and I crashed but I’m so happy to win,” she explained.

Australia’s Valentino Guseli “couldn’t be happier” to take the win in men’s snowboard. “I guess I got up on the right side of the bed this morning,” he said. His top-scoring technical trick was a frontside 1800 melon. Laying it all out for style points, Guseli went for “a trick I like to call my own, called a stalefly, I’ve never seen anyone else do it. It’s a backside double cork 1080 grab stalefish and on the second dip you tweak it like a method.”

Japanese riders rounded out the podium with Hiroaki Kunitake in second and Taiga Hasegawa third.

The Cardrona STOMP continues tomorrow (Sunday) with the Park Jam.