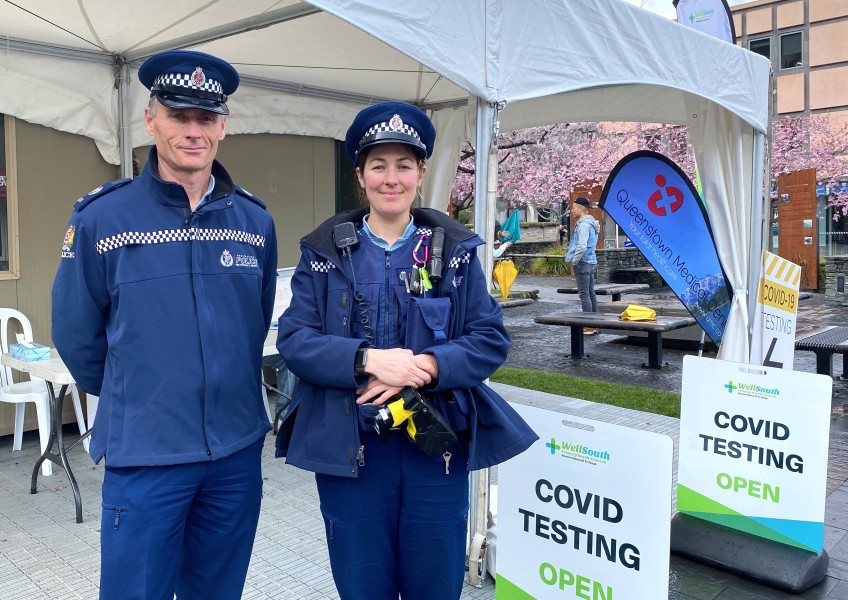 There was a steady stream of locals and tourists getting Covid tested at a new site in Queenstown's Camp Street today.

The pop up site was targeted at tourism and hospitality workers but it was expected those groups would make an appearance later in the day due to their largely evening focussed shift patterns.

Instead out of town tourists took advantage of the opportunity to "play safe" and two members of the local Queenstown police force decided to follow the same strategy as well.

"We're not worried about any Covid risk in particular but thought it was a good idea to get tested anyway" Senior Sergeant John Fookes told Crux at the site. He and colleague Constable Alex Cully both said the test was nowhere near as uncomfortable as some people believed. (See main image above.)

North Island tourists at the site said they were surprised that so many overseas workers were still in Queenstown in spite of the collapse of international tourism.

"We should go to Level 1 immediately" one visitor told Crux. (Read the PM's full statement today on Level 1.)

The pop up site in Camp Street is open from 8.00 am till 6.00 pm each day until Thursday this week and is free of charge. Most test results come back within 48 hours - but in an urgent case, where close contact with an infected person is suspected, results can be processed in Queenstown within 4 hours.