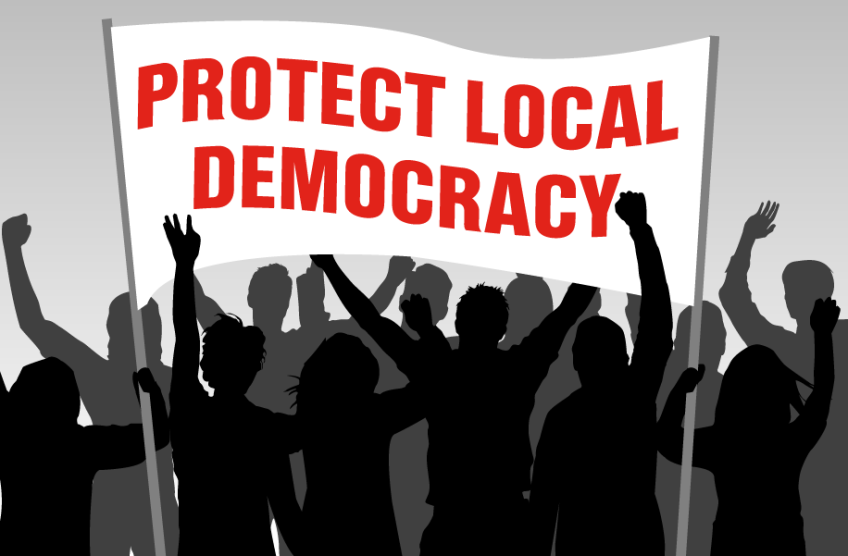 The Washington Post adopted it's now famous slogan just a couple of years ago in 2017 - Democracy Dies in Darkness. It was the start of the Trump era.

Here in the Southern Lakes and Central Otago, as the days get shorter and we start to scrape ice off our cars in the morning, there are longer nights and a new darkness of a different kind. The erosion of our true involvement in local democracy.

Like many dangerous and threatening things it has happened slowly - and not out of any one person's clever plan or deliberate design.

At the same time as our local councils have become bigger and much more complex, our local media has got smaller - a lot smaller. Journalism is being decimated by the rise of Google and Facebook as the dominant force in digital advertising and this international force is making many newspapers, especially local newspapers and news media, financially non-viable. Advertising has traditionally funded journalism, but now a new model needs to be found.

Google and Facebook have also turned everyone into a publisher, so even a single individual can get a global audience for either a valued, valid opinion - or hate speech and fake news. Google and Facebook are massive businesses with revenues greater than many countries - they are not our friend. They appear to create hardly any jobs and make relatively tiny tax contributions in New Zealand. Certainly I as a journalist would stand no chance of making meaningful contact with either of them. I would get fobbed off to a "Communications Advisor".

And there's the problem. As journalists we've often in the past had to lock horns and push hard to get past the "Communications" gatekeepers whose job it is to protect the decision makers - and often hide the decision makers from scrutiny and public accountability. It's always been a war of sorts but now the odds lie dangerously in favour of the Communications people as journalism falters and struggles to find a sustainable way to survive.

In New Zealand now there are now about eight communications and PR people to every journalist, and they often get paid literally twice as much. Not just councils, but all local and government agencies, employ small armies of Communications people to "manage" the information flow. Most of the stories you read in our newspapers and see on radio, TV and the Internet are in fact media releases that have been carefully written to be easy "kit set" news stories with quotes that may or may not have been made up by Communications people. Overworked journalists often just turn these media releases around in 20 minutes without the will or the resources to check the content or the "quotes".

The complexity of local government has also created a major industry for consultants. Millions of our ratepayer dollars are spent on outside consultants, sometimes former council employees, who use clever graphics and long winded "engagement" projects to "manage" planning, resource consent, roading, climate change and environmental issues.

We have had enough. This is a dangerous trend that needs to be halted.

The Crux Local Democracy Project is designed to challenge and reverse this unhealthy and undemocratic flow of information. We can't fix the journalism business model overnight - but we can dramatically improve citizen engagement and the way local agencies and government respond to our views as residents.

Residents need to be educated and informed in order to take part in an authentic local democratic process. We should not be fed vanilla media releases that hide the true state of affairs and make the "facts" impossible to understand. Just try reading a council District Plan or Annual Plan budget review. And yet in Queenstown and Wanaka our single council will spend a billion dollars over the next ten years - $100 million each 12 months - and most us would not have a clue exactly where this money goes. We should know and understand these numbers as intimately as we know our own household budget for food, petrol and power.

The Crux Local Democracy Project is designed to not only increase our coverage of local government issues but also to capture, in a unique full-spectrum way, how residents feel about those issues. This scientific, agile measurement of public opinion can be used to influence, and then hold to account, local government and local agencies.

The local government agenda should be set by the citizens, and not by professional managers who have not been elected or by elected officials who often don't have the time or the knowledge to read and understand the tsunami of complex council documents they are expected to vote on.

Public "engagement" as run by our local agencies and councils has become a farcical and confusing series of surveys, town hall meetings and online exercises that leave us more in the dark than we were before. There's one main reason for this. The actual outcomes are often governed by complex laws, like the Resource Management Act, where the party that can afford to biggest team of lawyers will always win. These "engagement" processes are too slow, too complicated, too expensive. Public engagement has become an empty, near meaningless, exercise in box ticking that has little connection with reality.

At the recent announcement by our Mayor of a local tourist tax the media arrangements left a lot to be desired. The Mayor and council CEO stood outside in the rain while media huddled inside a doorway - the lighting was bad, the audio was bad. The Communications people said it was all fine. We were told that we were guests at the council building and basically to do what we were told.

The media's job is to hold power to account. We are not, and never will be, "guests" on council property. We are journalists and ratepayers - we pay for the council and everyone needs to understand how our lives are governed and funded. Journalism might be under a lot of stress at the moment, but Crux plans to shine a very bright light on all aspects of our local government and local agencies. We'd like you to be part of that - in fact we need you to be front and centre of the Crux Local Democracy Project.

We are not charging for this project, it is free - but we rely on your donations. If you can afford a small, medium or large contribution just press the red Become a Supporter button on any of the Crux pages - including this one.