Residents in Kingston feel the Queenstown Lakes District Council has side-stepped them with its plans for a stormwater outlet to be located in the middle of the town’s lakeside beach.

Despite reassurances from QLDC the community would be kept updated on three waters upgrades in the township, Kingston Community Association chair Steve Osborne says plans for the new stormwater outlet were well underway by the time they were brought to the attention of the residents' group.

The outlet will discharge stormwater from the new Kingston Village subdivision into Lake Whakatipu, at the northern end of Oxford Street, beside the Kingston Stream. 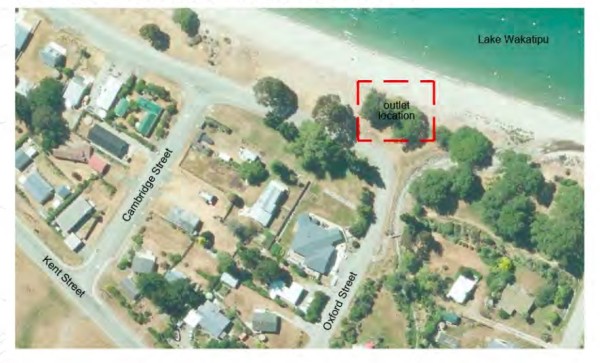 Kingston residents reckon the QLDC should have kept the community in the loop of a planned stormwater outlet on a favourite beach (Image Resource consent application).

In March, the council applied for the resource consent needed for the earthworks related to the outlet, on a chunk of public land sandwiched between the beach and the road.

As the impact of the proposed stormwater outlet was deemed to be “less than minor” the resource consent application was not needed to be publicly notified.

However, Mr Osborne says the QLDC had previously committed to consulting the community on any three waters structures it proposed to build in the town.

Instead, the group found out by chance construction work was scheduled to get under way in a matter of months.

The association requested a meeting with the QLDC and asked for the resource consent application to be paused until staff had met with members of the community.

The public meeting, to be held tomorrow night, was agreed to, but the resource consent application was subsequently granted.

“Our main concern is we just simply don't get consulted enough with these things that they want to do."

Other than a historic jetty at one end, the lakeside is in pretty much a natural state, and Kingston locals are worried the stormwater outlet, plus two more like it planned for the beach, will have an impact, regardless of what the council’s planners may say.

“You can walk from one end to the other, which everybody does with their dogs and their kids, and it's very busy in the summer, and it has no structures on it…we could end up with three concrete structures on Kingston beach, and I just think there's got to be a better solution,” Mr Osborne says.

The residents have asked for detailed images from the council depicting what the proposed structure will look like from the beach, the road and the reserve – so far, they’ve seen nothing.

“Even though they could argue that through the RMA they don't need to, because they believe the impacts are less than minor, I think what's relevant is the community want them to.

The resident’s association is not “anti-development”, he says. 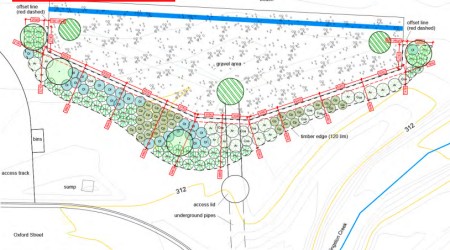 Is a beach popular with tourists and locals the best place for a 40m-long stormwater outlet structure? (Image: Resource consent application).

“We understand that development has to happen.

“We live in one of the fastest growing regions in New Zealand, because it's beautiful, and we've not nothing against more people coming to live here.

“We just think it needs to be managed in a little bit more of a holistic way, and done with the community.”

Close to 60 questions and comments have been provided by Kingston residents for the QLDC ahead of tomorrow's public meeting, which will be held at the golf club at 7pm.

In its resource consent application, the QLDC says the stormwater outlet will consist of three manholes and 40 metres of perforated polyethylene pipe (PE) that will lie below or flush with the finished ground level.

Construction is expected to take eight to 12 weeks, with native plantings to minimise any visual impact on completion. Several existing trees will be removed.