After a rejected resource consent for a luxury lodge in Wānaka, the Queenstown Lakes District Council and New Zealand company Second Star Limited will be meeting with the Environment Court to discuss next steps.

QLDC commissioners said no to the proposed high-end property development in August, based on potential significant adverse effects on the landscape, but the developer's appealing the decision, saying the council gave “no or insufficient weight to the potential ecological, tourism, unique architectural and walking track benefits” the lodge would bring.

Now there's two options on the table: meditation or a court hearing. Meditation means a Environment Court commissioner will lead a private discussion between the two parties to discuss the issue and attempt to find a solution. Otherwise, it’ll progress publicly through the courts.

Either way, the judge will hear from both sides on Friday and release a decision next week on how to best proceed. 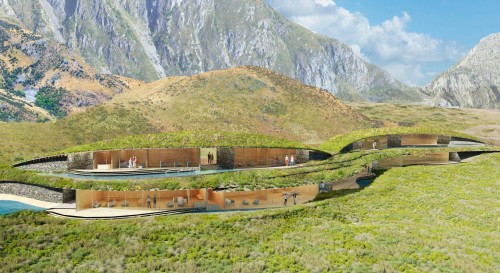 The company – owned by US billionaire Peter Thiel – applied to build visitor accommodation for up to 30 guests on a 193-hectare lot on Wānaka’s outskirts, at Damper Bay.

The presented designs were drawn up by Kengo Kuma and Associates, the same company that designed Tokyo’s Olympic Stadium.

In August, the QLDC declined the application based on the location and the size of the buildings and their visibility from the Glendhu Bay walking track.

The proposed complex is situated in an Outstanding Natural Landscape area – where limited development is allowed under the District Plan – and would be “inappropriately dominant”, as per the commissioners' report.

But Mr Thiel’s company hasn't taken this as the final say on the matter.

A written appeal was lodged to the Environment Court on September 5 by Second Star Limited, on the grounds of inconsistency, asking consent be granted as well as compensation for the appeal.

The document says QLDC’s refusal was inconsistent with the proposed district plan and the Mt Alpha Landscape Schedule – which is awaiting release following public consultation - and, as said earlier, doesn't consider any of the potential benefits of the proposed development.

During the QLDC consent process, Longview Environmental Trust representative and landscape architect Stephen Brown said the lodge would have “unacceptable adverse landscape effects on the ONL (Outstanding Natural Landscape area)” and the party was in opposition to the development.

The Upper Clutha Track’s Trust was listed as “neutral or sought that consent only be granted subject to certain issues being addressed” in the council report of the decision.

Crux approached Second Star Limited for comment on the Environment Court process, and they declined.

Mr Thiel's company was discussed by the Wānaka-Upper Clutha Community Board in their ordinary meeting last week, albeit on an "unrelated matter".

On Thursday, the board voted in support of a water pipe from Damper Bay up to Mr Thiel’s land, to his currently non-existent development.

Proposed is a three-meter water supply easement to be installed underneath the Damper Bay Lakeside Recreation Reserve from the bay to Mr Thiel's property.

Installation would involve closing access to Glendhu Bay Track for one week but wouldn’t produce ongoing affects to the area, the report on the decision says.