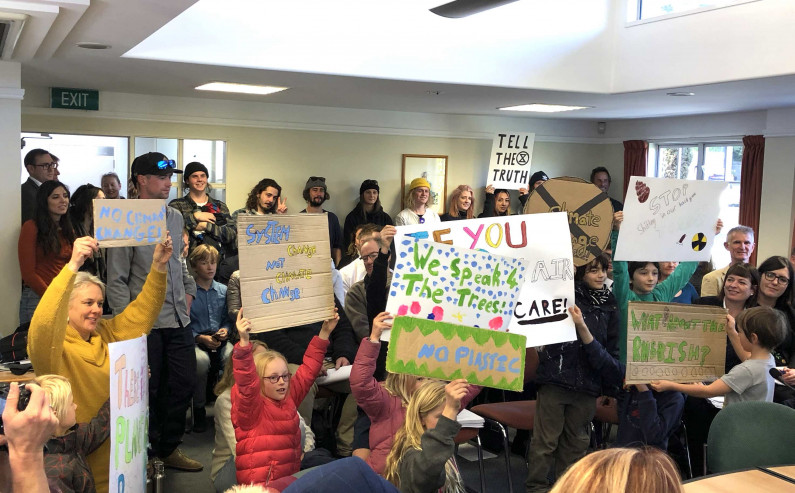 “Your role is to protect our environment, not to ruin it. You may take it for granted, but it is my future.” This was 11 year old Luka’s message as he addressed today’s QLDC meeting, where a climate and ecological emergency was declared.

The declaration means that the council accepts the science around our climate crisis and recognises the urgent need for action, agreeing to incorporate it into their decision making process.

Luka’s was part of a massive public response, and the council chamber was packed with kids, placards and over 70 people urging QLDC to make the crisis declaration. The local Extinction Rebellion group were given ten minutes to address council, and spokeswoman Sonata McLeod delivered a powerful speech.

“We are now at 1.1 degrees. The chances of us staying under 2 degrees by the year 2100 is just 5%.  We are most likely to reach 3.5 degrees by then - this is unlivable, and this is within the lifetime of children alive now. We will face mass starvation, and human extinction is a possibility,” Ms McLeod told the room.

“We know how to harness renewable energy, avoid waste, and encourage sustainable and active transport use. We have the technologies and the ingenuity. What we need now is leadership, the political will, and courage.” While the declaration of climate emergency is non-binding, ER activist Pierre Marasti says that it’s a very important first step. “This is just the beginning. We need to face the problem if we want to solve it, and now the real work will start. We hope that the council will now engage with the whole community in order to find the solutions.”

Over the last several weeks, local councils across New Zealand have been making declarations of climate emergency, including Auckland, Christchurch, Dunedin and Wellington. Globally, 600 elected bodies representing some 74 million people in 13 countries have done the same.

Jim Boult told the Extinction Rebellion group and their supporters that they should feel really proud.

“We are with you, climate change is the most significant issue of our time, with the potential to change all of our lives beyond recognition. Nobody should be silent on this crucial issue. You are seeking a powerful statement, but our actions will speak louder than words.”

Councillor Quentin Smith pointed out that those in favour of the declaration weren’t necessarily ‘radical’ people. “They’re not tree-hugging greenies, they’re not extremists, these are everyday people. And equally as important as the declaration is the action that’s set out in the QLDC's Climate Action Plan.”

Councillors acknowledged that what’s important now is what comes next, and the draft Climate Action Plan was the next major point of today’s discussions. The plan, which has been developed by QLDC staff with initial community input, was approved and is now open for further community feedback.

It focuses on both how we can reduce our emissions as a district, and how we can maximise our resilience to the actual (and impending) effects of climate change over the next three years.

While counsellors were largely supportive of the plan, the importance of community feedback and the resources to support it was emphasised, particularly by councillor Alexa Forbes. Ms Forbes, and multiple public submitters, didn’t hold back in calling out the irony of a Climate Action Plan sharing an agenda with the Statement of Intent (SOI) for airport expansion.

“I’m pleased with where we’re going, it’s a very good start, but the feedback is going to be very very important. But I'm concerned that there is a lack of financial resources devoted to this plan," said Ms Forbes.

“Our economic scenario is going to change, there are going to be things lost and we’re going to have to embrace the gains that will come from living a little closer to nature. I want us to be aware of that - business as usual is no longer an option.”

Mr Marasti emphasises the same point, saying it’s possible to solve the climate crisis within the rules of chemistry and physics, but it will require unprecedented changes. “What I like with the QLDC climate plan is that they studied the science, and they didn’t leave anything out of the equation. It doesn’t go into detail into what the actions will be, but I like that the council is flexible to improve it.”

On the subject of Queenstown Airport Corporation’s SOI, Mr Marasti says it’s simply impossible. “If you want to be consistent , there is no way we can expand the airport. It is unacceptable.”

However, despite strong opposing statements from counsellors including Forbes and Smith, the votes came in at 6-5 in favour of receiving the SOI. This means the document is acknowledged by the council but not accepted. Read more here.

Also highlighted by deputy mayor Calum Macleod was the fact that we can’t overlook the impact of household greenhouse gas emissions in a district with skyrocketing growth. “Our housing stock is crap, and we need to push for Building Act reform,” Macleod said.

Ms Forbes urged the public to read the Climate Action Plan, which has four main goals, and give feedback. The goals are:

The plan includes an overview of QLDC’s current and future projects around climate change, and how they plan to collaborate with partners and stakeholders.

It was clear at today’s meeting that the decisions made around the climate crisis couldn’t be more crucial, and that the community’s feedback is of utmost importance. As David Attenborough puts it, what we do in these next few years will profoundly affect the next few thousand years.

The plan is in place, but the action is yet to be seen, and perhaps best considered with Ms McLeod’s parting words in mind: “You are in a position of influence. Ask yourself, what does it mean for me to be a good human? What does it mean to die without regrets? Will I be able to look my grandchildren in the eye and say I did the best I could?”