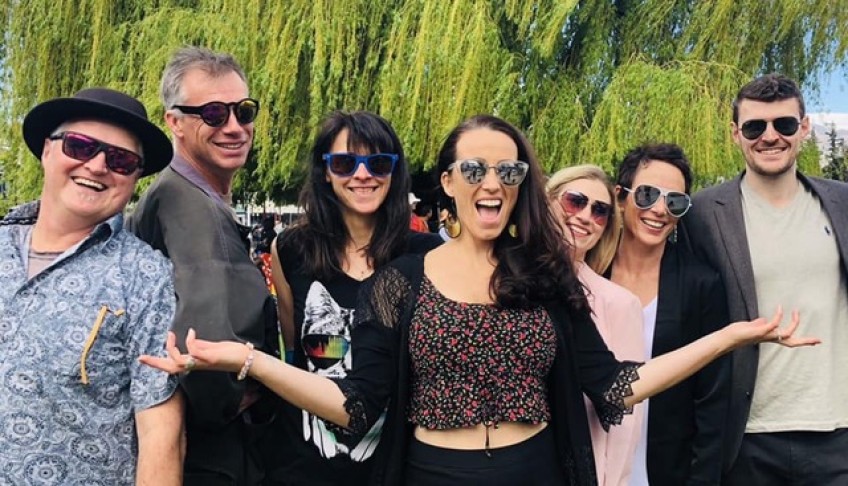 The funk so alpine... check it out now

They’re a sound that is dynamic, unique, and entirely homegrown. Jazz notes blend with contemporary sounds, only to be uplifted by soaring vocals. It’s a completely different sound. Funky describes it best. It comes as no surprise that five very interesting, and entertaining, characters are behind the music.

The Alpine Funk Line is the latest iteration of a band that has been around in one form or another for the last decade, playing original instrumental music and filling venues repeatedly. Consisting of Helen Carter (saxophone/keys), Dom Stayne (bass player extraordinaire), Henry Smeaton (guitar) and Jeff Sinnot (drums & percussion) they have recently teamed up with vocalist Jenn Shelton. As Dom says, ‘We change the name every two years to throw groupies off the scent.’ There’s a self-deprecating deadpan humour that becomes apparent as you get to know the band. They all came to music in their own ways, but they all arrived early and never looked back.

Jeff started with a Bali (Fijian log drum) aged three and got the hang of hitting things rhythmically by practicing with pots and pans. He says he tried to learn guitar, “but got bored, must have been my ADD.” After hiding his poor vocal skills by skulking in the back row of the school choir his dad eventually caved and bought him a drum set which he has been happily banging away at ever since.

Dom’s fate was sealed when a rebel friend broke the silence in the school library in 1977. He recalls the moment he was called to music:

“The first bars of ‘Smoke on the Water’ emerge. Time stands still. Conversation fades. There is nothing but music. Then at Bar 17 a glorious dom-dom-dom-dom begins. It’s playing my name!”

Helen’s memory is remarkable, she could read music before she could read letters - a remarkable feat. Like Jeff, she too used pots and pans as a drum kit, went through an opera stage and then managed to turn the quintessential kiwi recorder experience into significant talent with the keyboard and saxophone.

Henry also started as a toddler, with his uncle’s pitch pipe. He managed to make this old school tuning device sound musical and so he was given the chance to graduate to an actual guitar. He's never looked back.

The band started to come together when Henry answered an add by Helen for a supporting guitarist for a visiting musician. The rest of the crew had merged from two previous bands, ‘Lucky Legs’ and ‘Hound Lounge’. After their guitarist ditched them and left the country they kept going under the name ‘Tin Flowers’. One of their most popular instrumental songs was ‘Alpine Funk Line’ and as the band evolved the name seemed to fit. Henry sums the name’s appeal up, it’s about “the poetic connect between the music we play and the beautiful yet hazardous place we live in.”

The ‘funky four on the floor’ have recently been joined by vocalist and lyricist Jenn Shelton, who is hugely admired by Jeff and the others, he calls her ‘one of the best vocalists I think this country hasn’t heard of before,’ high praise indeed.

To get true ‘funk’ requires drawing on a number of different influences. The depth of the sound that Alpine Funk Line have achieved is due in no small part to their diverse influences. Dom’s your typical 70s teen, rocking out to Pink Floyd, The Doors, Led Zeppelin and Deep Purple, amongst others. Henry may have come of age thirty years later but he loved the same music, adding in classic acts like the Red Hot Chili Peppers and 80s guitar virtuosos like Satriani and Steve Vai. Helen grew up with her dad’s classical in one ear and her brother’s pink rock in the other, a perfect mix of ingredients for the budding funker in her. Jeff’s life changed forever when he heard the Sex Pistols, the post punk movement combined with the island reggae sound of his youth in Fiji melded with a love of 60’s Motown to create an eclectic mix of sounds. Listening to their work again with the benefit of hindsight, the influences are clear, small nods to their heroes and early influences. What is magical is how they manage to bring it together seamlessly. The wide open spaces of Wanaka and stunning landscapes are inspiration enough.

The band play primarily for the joy of the music. Playing for parties and festivals, with happy crowds and good sound is what motivates them. For Jeff, it’s about ‘letting the music soar as it takes us to places we haven’t been before.’ They’re artistic souls and it’s evident that sharing the energy of their music and bouncing off of each other to create new depths to their sound will keep them motivated for a long time.

For the last two years they have been writing fresh material and now have enough to fill an album - that they are about to record. No flash travel and recording studio for these locals. In Dom’s words, “I pay lots of money to fix the recording interface I fried last month, then we take over my dining room for a weekend and press ‘record’.”

They’re a band that finds energy by playing to one another, by engaging with each other and getting in the groove. Its high stakes recording, all live and all in sequence. They may do some vocals as overdubs, but by and large it will be a live, ‘front room’ recording. Dom’s dining room that is.

Jeff is passionate about what they are creating, “We’ve all worked really hard over the past couple of years so we want to get this work down.  Even if we do nothing more with it there will be a record of what we have done.” In today’s digital world, this is a viable approach, they will be able to produce a quality album and get it out on streaming services pretty promptly.

The Southern-Lakes is a pretty unique place to be creating and performing music. Jeff calls it ‘musical promiscuity’, the ability of most local musicians to play most things. “Sometimes a call will come for a gig where you’ve never met anyone & sometimes it’s like a class reunion but the fact remains it is the groove that binds us.” he says. That closeness has been enhanced by social media, more communication means it’s easier to get together, particularly in a smaller region. Although they got together partly through an old-fashioned advert, new media makes those connections easier and more frequent, which helps to develop different sounds. The band feed off of each others' energy, making the music ever-better.

It can be difficult, in a tourist-centric environment to find venues that want to invest in musicians and value original work and the effort that goes into writing, recording and performing music. All too often, cover bands are considered ‘enough’ for the tourist market. There is a slow change though, The Sherwood and Yonder are making a push in Queenstown and Gin & Raspberry in Wanaka are supportive of local acts. Wanaka needs more live music in the band’s opinion - and a big part of that is finding the right venues with good acoustics and good size. They are hopeful though, the two million visitors a year with the burgeoning local population is a good market.

The best way we can support local music is by going to gigs, by making the effort to get out the door and to celebrate this amazing talent. Spread the word, turn off Netflix and get out to enjoy something that has had emotion, energy, love and creativity poured into it. The band feel strongly about the need to support local music, not just themselves, but the whole scene, from high school musicians to those that have been around the block.

“These people pour their souls into it.  It’s kind of like a plant, with enough food and water, and above all, attention, the organism will grow and flourish, deny these and it will wither and die.”