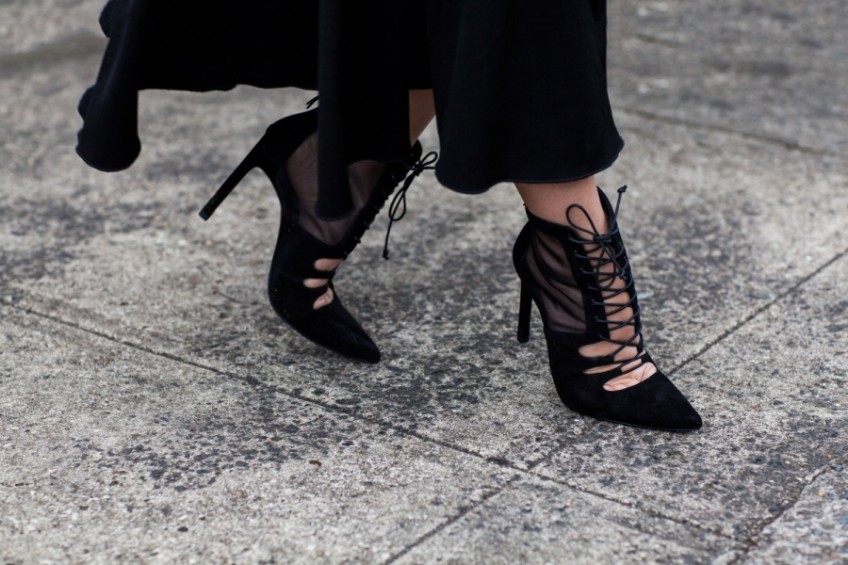 Leila Yeoh was running late; she needed to shower, change and be ready for dinner by eight. Driving too fast, the tyres squealed as she turned onto the fifth floor: residents’ private parking. Traffic had been backed up leaving the city; she had only thirty minutes to be in and out of the apartment. Zain did not like to be kept waiting.

That morning she had woken rumpled; her occasional midweek company had left very late. Dmitri was all about physique and horsepower, but he was just a little bit too keen, too wanting. She had chosen her clothes for the day carefully. As team leader, her primary role today would be to pitch the new advertising campaign they had created to Rosburg & Roman’s; looking the part was essential. She had decided to dress in the colours of the Caribbean, picking out the navy sleeveless blouse—fitted for obvious reasons, and the turquoise skirt banded in darker ripples of blue. The real clincher of her outfit was the pair of Weitzman high-heels, the height of which elevated her perfectly. Their double-looped and diamond studded ankle straps were dangerously fiddly but their colour was divine. The effect added ass, boobs and class. Deadly, that’s what Marléne said.

The apartment, like the shoes, was borrowed. Leila could never afford such a view. Zain, with magnanimous distain, had practically given her the keys. It was hers whenever she was in the area. Just be here when you’re needed, he’d said. The fact that he had a bay-area property going spare gave him an attraction his personality otherwise lacked. The extra sweetener, which made him so much more adorable, was the loan of the rarely used Bentley Continental. Leila never turned down his gifts; she would be a fool not to accept such generosity, that much was made clear. The drawback, and there’s always a drawback, was that he expected to be the one in control, the one to dominate. Consequently, she had learned patiently when and exactly how he liked her to submit. She turned away from the thought, concentrating on the Bentley’s muscular acceleration as she arced it into a curve. The car was even more luxurious on the inside than its exterior suggested. Leila had coveted its matt-gold, powerful lines from the very first evening she had laid eyes on it, and then searched for its owner. Close up, with her face buried deep into the fine-grain leather of the rear seat and her dress wrenched up to her hips, she had smelt the Bentley’s opulence, snorting its perfume between his thrusts.

The pitch to Rosburg & Roman’s had been perfectly delivered. Although some people thought otherwise, Leila’s job was more than just presentation and frills. She had worked damned hard on putting the right people in the right places and she knew how to get the best out of them. Her team of ‘creatives’ occupied a complete floor of the main office, the one she labelled the geek-space. Leila was certain that more than one of her creative team had been living in that office semi-permanently—stimulated by a diet of gummy-bears and beer as far as she could gather. So long as the team came up with ideas she left them alone; her role was to manage, not mother. The chairman himself, Mr. Nasser, had personally complimented Leila on her and on her team’s efforts. The truth was the lecherous old goat’s eyes had been crawling across her cleavage the whole time he was praising her work. Leila knew when to keep her shoulders back and her smile switched on; nevertheless, she kept her flirtation as bland as possible, the last thing she needed was to be put in a compromising position by the Old Man.

Tonight she had dinner plans at Gregory’s, with its 70-something floor view of the Gulf, where Zain would most definitely be picking up the tab. After a day like hers, what she needed was half-a-dozen exquisite passion-fruit daiquiris, a platter of blood-red tuna belly, followed by a series of violent orgasms. What she predicted would actually happen, was that she’d be fucked disappointingly quickly by an inebriated Zain—the fact was he hadn’t the staying power. That was why she kept Dmitri dangling, like different heels for different occasions; she smiled at the prettiness of the analogy.

Leaving the office early hadn’t been possible. When she finally left the building the traffic had already begun to snarl. She headed out of the city towards the bay, gunning the engine when possible with a twin injection of adrenaline and appetite. The Bentley’s explosive acceleration made short work of queues ensuring that she was always at the head of the next traffic light. She knew she should have taken off the damn high-heels before she’d left the office—their soles slipped from the tiny brake and accelerator pedals too easily, but she just loved the way they looked, even in the dark of the car’s foot well. She scratched around the red welt that was appearing above her right heel—when she got to the next red, she would at least loosen the tight loops of the ankle straps.

Zain’s apartment came with two reserved parking spaces situated close by the access elevator. Their proximity to the fifth-floor entrance meant that opportunistic residents had a habit of taking one of the available spaces. On the occasions that Zain was away and she knew she would have no other company Leila parked in the middle of both spaces—they were hers by extension, she was simply marking her territory. She hit the entrance ramp hard and screeched up floor after floor, blasting her horn at the intersections until she reached the fifth. An unknown 4x4 was occupying one of her parking spaces.

‘Fuck!’ She hated the selfishness of these people. The length of the Bentley meant that the only way of parking was to back the car into the hardly generous space; with a supporting pillar on one side and the lumpen 4x4 on the other that meant careful manoeuvring. Leila swung the car into reverse moving the sole of her high heels carefully from throttle to brake. The angle she’d chosen proved too tight causing the rear parking sensor to erupt into furious beeps as the back-end neared the pillar. She looked at the clock on the dashboard, mentally readjusting the time she would have to shower and to get dressed…she would almost certainly be late for the restaurant now, she thought.

Craning over her shoulder, Leila re-adjusted her reverse angle and began the process of inching into the parking space; once the wing mirror had passed the concrete pillar she would be safely in. Throttling lightly, she crept backwards, eyes on camera and wing-mirrors as the proximity sensors flashed in spasms. With a final flourish she gave an extra squeeze of gas to perfectly back in the length of the Bentley’s nose. As she turned with a smile of satisfaction inspecting her work, the lozenge-shaped sole of the Weitzman skidded from the surface of the car’s accelerator pad, slipping abruptly off the throttle’s edge. Immediately, her right leg pushed down into space and the loose ankle strap of the descending shoe caught the gas pedal with a yank roaring the V8 engine into life. The Bentley Continental, designed with powerful acceleration in mind, easily mounted the low retaining barrier behind the car’s rear wheels, smashing into the car-park’s outer wall and protective grill with the power and solidity of a tank. Pushed backwards by the car’s impact, Leila instinctively braced herself—pushing against the steering wheel and jamming both feet and the entangled pedal to the floor. With the accelerator fully depressed, the Bentley leapt into overdrive exploding the flimsy outer barrier of the car-park horizontally into the air, followed by two and a half thousand kilos of luxury engineering. Leila sailed backwards, buried in the embrace of the driver’s seat, freed from the bonds of gravity by the momentum of the car. In a moment of untimely providence, the jewelled ankle-strap slipped its loop from the embossed accelerator, levelling the engine’s pitch to an almost enviously throaty purr.

As the last rays of the sun lanced the edges of the clouds—bleeding dusk into the evening sky; the realisation occurred to Leila that she had never seen the view of the bay from this angle, its curved coastline drifting north to south-east, the view increasingly blocked by the rising fingers of the city’s towers. Glacially—it seemed to those who observed its lateral flight, the pull of gravity caught the arc of the car’s outward movement, transforming it with a rush of sound into a howling descent. With gathering momentum the explosion of masonry and metal hurtled to the ground amid the flap of fabric and the growl of eight attuned cylinders; above which, snatched by the wind, could be heard the alto-pitch of Leila, screaming for all she was worth. James Ahern has only recently begun writing fiction. His day job as an English teacher has taken him to a variety of places: from the rivers of the Amazonas, to the deserts of Arabia, via the tropical delights and flavours of Indonesia and Mexico. Currently he is in his final year of studying a Masters in Creative Writing.