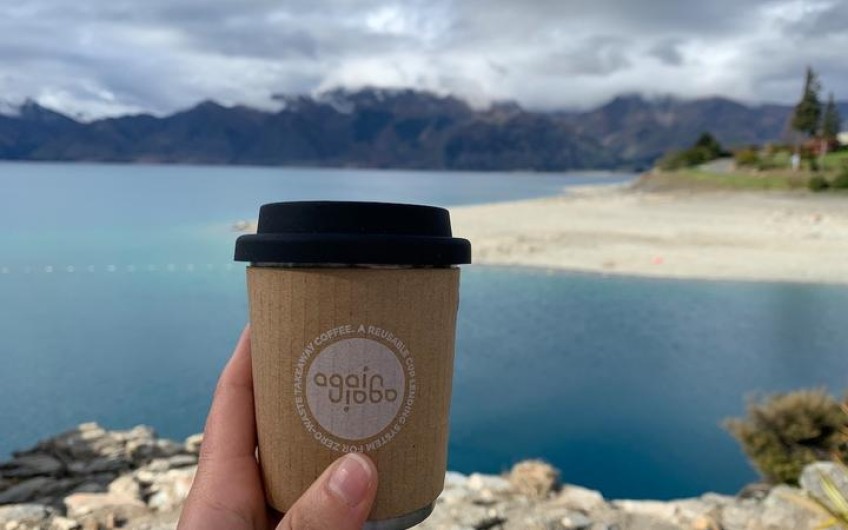 Cafe owners in Wanaka want to ditch all single use coffee cups by 2022, with three of the town's cafes already refusing to sell any disposable cups.

They're part of a coffee culture revolution in this country that started with boutique and neighbourhood cafes, but that's now seeing bigger industry players and universities signing up.

Listen to the full RNZ interview.

The growing trend is in part being made possible by takeaway cup lending schemes like 'Again Again'. Since it first launched in Wellington back in November 2018, it has now spread to Auckland, Christchurch and Wanaka.

Piatek explains that Again Again works by customers choosing to borrow one of the cups at the point of sale with a $3 deposit which is fully refunded when the cup is returned to any cafe in the network. She says the scheme is taking off.

“It’s exploded. It’s been a very fast and furious year. We now have more than 170 cafes across the country.”

She says it works well for cafes from a marketing perspective, because customers want to be a part of waste minimisation.

“We found that a few cafes who’ve made the very bold move of getting rid of single-use cups altogether have really seen that the support from the community is overwhelming. If anything, there’s actually been an increase in coffee sales where people have gone out of their way to support them.”

“It’s certainly met and exceeded our expectations and it’s really heartening to see how well the community has gotten on board.”

Parsons from SUC Free Wanaka says part of their success could be down Wanaka being a small and tight-knit community.

“We all know each other, we all chat to each other about what’s going on.”

The goal for the group is to be SUC free by 2022. It’s a big goal, but she believes they can get it done.

“We are definitely confident it can be done by 2022. Already we have three cafes that have totally gotten rid of the single-use cups and only offer BYO or Again Again.”

Her own cafe will be getting rid of single-use cups at the end of this month.

“For us, the bigger picture is just trying to get everybody used to the idea that they have to bring their own or can borrow one. You can already see the change among the locals and wider community.”