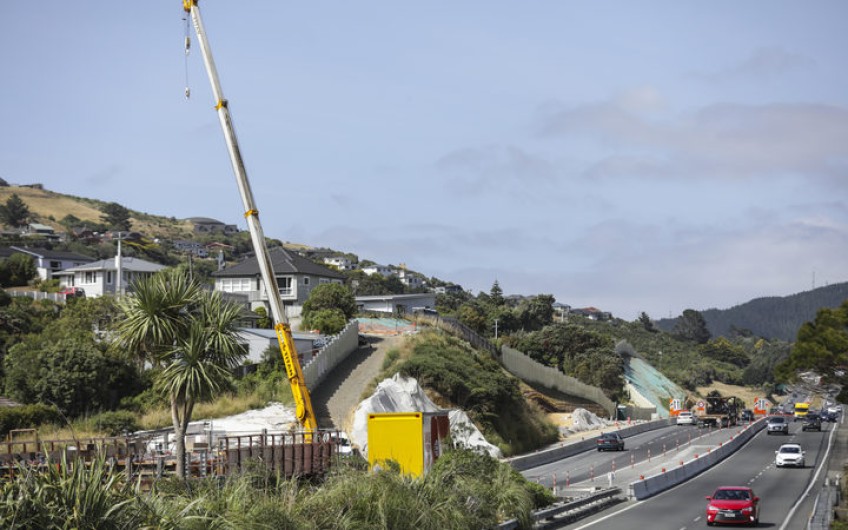 Transmission Gully project a 'circus', sections to be re-laid

The Transport Agency has admitted that sections of Wellington's billion-dollar project, Transmission Gully, need to be re-laid after an error.

It's another bump in the road after a number of delays on the 27km stretch of highway.

On Monday the agency said the completion date had been extended into next year, exceeding its current November deadline.

In a statement the Transport Agency confirmed to RNZ parts of the road will need to be removed and re-done.

"Process errors have occurred at isolated locations on Transmission Gully, the longest of which was 400m in length. The cost to remediate this is carried by the builder and is considered part of the construction process.

"A quality control process is in place to identify such errors, and a set construction method is used to remove and replace the material, which is recycled for use elsewhere on the project."

However, the Transport Agency was not able to specify the total length or the number of locations where the road needed replacing.

Contractors spoken to by RNZ described the whole job as a "circus".

They all said the problem was much bigger than the small sections of 400m the Transport Agency suggested.

One told RNZ they would drive past different sections of the road and see the same contractors ripping up the work they had done earlier in the day and starting over.

Another said in one zone 10 kilometres northbound and southbound - 20km in total - needing to be redone after failing a "compaction and moisture test". That amounted to more than a third of the 27km route.

One contractor also claimed that parts of road that had been laid correctly but had been damaged heavy trucks rolling over them daily. They said there was a 3km stretch that was one step away from being completed with chip seal, but most of it had gone corrugated and bumpy.

The mistake appeared to be in the laying of the road.

There are multiple layers underneath the asphalt you drive on, and if not correctly done the road will fail the necessary tests to get the sign off and has no chance of standing the test of time.

Below the asphalt, layers of rock are mixed together with smaller sand-like bits and a small amount of cement, which then gets compacted.

If the mix is too wet or gets moved around too much the small bits of fine rock and sand fall to the bottom making it hard to compact down properly, and problems arise if if asphalt gets laid on top of that.

Similar errors have been made on the Peka Peka expressway which is still being fixed with the taxpayers money.

Transport Minister Phil Twyford said the Transport Agency assured him they were committed to seeing the Transmission Gully project completed as quickly as possible.

In a statement he said, "While there will be an impact on the completion date because of Covid-19, they are still negotiating a new completion date and working through other issues with the contractors."

The Transport Agency has maintained the error was not widespread or unusual, and the cost would be covered by the builder.