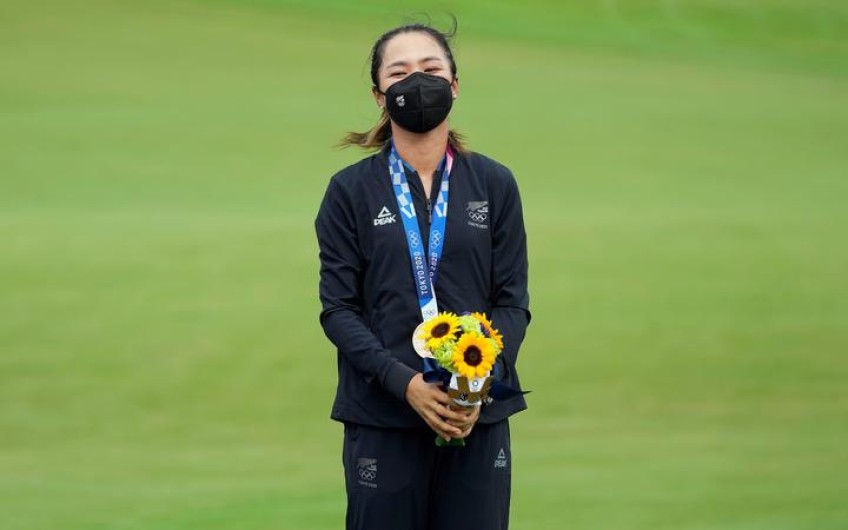 Kiwi Lydia Ko has won New Zealand's 20th medal at the Tokyo Olympics, with a bronze medal in the women's golf after losing a second place play-off.

Ko finished -6 under par for the day, tied with Japan's Mone Inami. Ko failed to make a par putt on the first play-off hole and Inami took the silver.

Ko claimed silver at the Rio Olympics five years ago.

With Ko's medal, New Zealand's tally will grow to a record 20 at these Olympics.

Play was stopped for half an hour due to the risk of lightning, before resuming.

Korda won the gold medal with a tense one-stroke victory to complete a United States sweep and secure another glittering prize for a royal family of sport.

Overnight leader by three strokes, Korda gave up a share of the lead to Japan's fast-finishing Inami on the 17th but the home favourite bogeyed 18, giving the American a precious one-stroke buffer as she shot towards the final green.

Korda landed her second in regulation and two-putted for the winning par, finishing with a 69 for a 17-under total of 267.

The tournament was Korda's to lose as an early birdie extended her lead to four strokes but former world number one Ko made it interesting by charging out of the blocks.

Ko raised the pressure with a fourth successive birdie on the fifth hole to shave the lead to two strokes after Korda slid a four-foot birdie putt past the cup.

With Ashok also nipping at her heels, Korda imploded on the seventh after landing short of the green, needing three attempts to chip over a ledge and run the ball near the pin.

After tapping in for five to fall to 14-under with Ko and Ashok, a seething Korda tossed her putter at her bag and strode to the next tee.

She then drove into a fairway bunker on the eighth but shook off the setback with a stunning 21-foot birdie putt to cling to the joint lead.

Regaining the lead with a curling, eight-foot putt downhill for birdie on the next hole, a galvanized Korda marched on.

Her three-stroke buffer was restored as Ko slumped with back-to-back bogeys on 10 and 11, but Inami soon made her charge.

Played ahead of Korda's final group, the 22-year-old Inami rolled in an 14-foot birdie putt to grab a share of the lead at the 17th but her challenge faltered when she plugged her approach shot into a greenside bunker on the 18th.

Inami returned to the 18th to win silver for Japan when Ko slid a par putt by the hole for the bronze, five years after grabbing the silver at Rio.