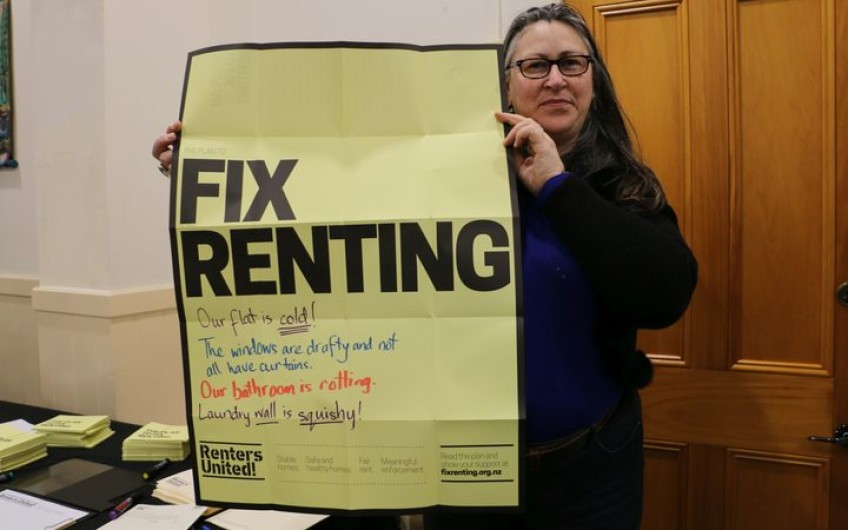 Dozens of tenants sick of mouldy, cold and outright dangerous homes are backing a campaign for tougher laws for landlords.

Renter Linda says her Wellington flat is draughty and cold, but the landlord refuses to do anything about it.

The plan from the Renters United group calls for stricter rules to ensure people are charged fair rent for houses that meet minimum standards for health and safety.

Linda - who has lived in her Wellington flat for four years - said renting had been a nightmare.

"It's draughty, It's cold, we're on a busy road so we get diesel dust all through the flat, the skirting boards in the bathroom are rotting but the landlord doesn't want to do anything about it."

She was just one of the more than 60 people who met last night for the launch of 'The Plan to Fix Renting'- which aims to solve the problems tenants like Linda faced every day.

One woman, who did not want to be named, said the plan meant her landlords would have to tackle things like windows that did not fit properly.

"There's really big gaps [either side of] these really big windows, that you sort of pull up, and they've got like three-centimetre gaps in the frames," she said.

"I complained about it because they let in, like, these big draughts and the landlord came over and just stuck carpet on top of the cracks."

John, who was also at the launch, said his flat had serious structural issues.

"The building is yellow-stickered and the yellow sticker fell off in a storm over the holiday season a couple years back and he hasn't fixed that," he said.

"The law requires the yellow sticker to be up there no matter what and he hasn't got it replaced."

Another tenant said he was tired of landlords who refused to pay money for professional tradies.

"As much as I love the New Zealand jack-of-all-trades attitude, I actually want things fixed and when they are fixed they shouldn't break," he said.

"It's gotten to the point where we've had a driver for the LED lighting which has caught on fire because the landlord decided to go and fix it himself when he's not a qualified electrician."

Under the plan, landlords would have to get work done properly, or they'd miss out on a rental warrant of fitness that could only be issued if the building was up to code.

Many of the people RNZ spoke to did not want to be named because they were worried they might be evicted.

Such behaviour is illegal but the tenants said it happened anyway, which is why they wanted landlords stopped from being able to give notice without reason.

Other proposals included capping rent increases to the rate of inflation, abolishing letting fees and giving the tenancy tribunal more teeth to investigate and order landlords to take action.

Renters United said it would continue to pressure the government until something was done to fix what they describe as a crisis.