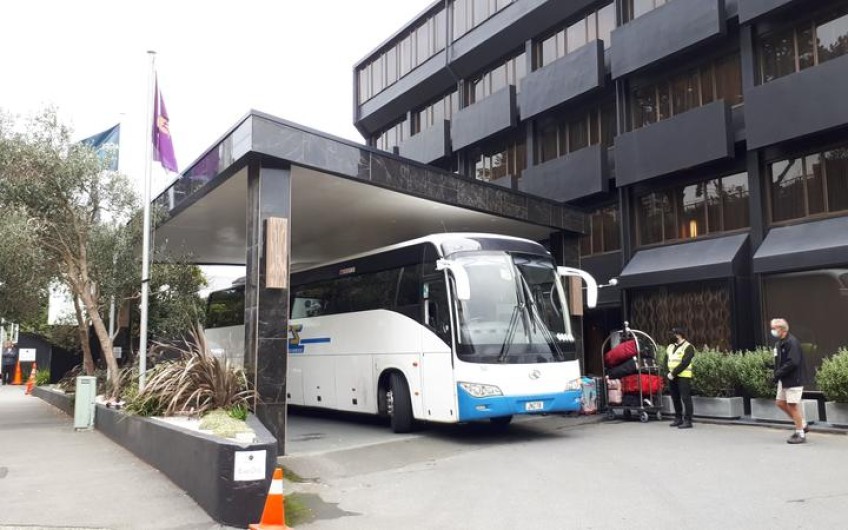 The best way to mitigate risk posed by 15 Covid-19 infected crew members at a MIQ facility is to lock them in their rooms with no breaks, a professor of medicine says.

University of Auckland's Des Gorman told Morning Report the Wellington public had been exposed to undue risk because the system designed to keep the virus out the country had not be executed.

Viking Bay fishing vessel crew members were transferred from the ship berthed in Wellington to the Grand Mercure Hotel in the capital yesterday. One of the infected crew was confirmed as having the virulent Delta variant.

The hotel usually keeps one floor with 10 rooms for infected people, but to accommodate the extra demand it has opened up a second level.

Gorman said the hotel hadn't been designed to stop people breathing in others' exhaled breath and keep their environments separate and the whole episode posed an unnecessary risk that now needed to be minimised.

"I don't think the mariners should have been allowed anywhere near New Zealand waters without proper pre-departure testing and appropriate quarantine," he said.

"It's not the first time we've had mariners arrive here where we've been told had of gone through our pre-departure requirements who obviously haven't."

Having failed to keep them offshore, authorities should now ensure the mariners are kept room-bound during their quarantine, Gorman said.

"There will be some that will not be infected yet. I think mixing and mingling will simply guarantee they will all get infected. The reality is that we have imported a problem that should have been kept offshore with pre-departure testing and so on.

Restricting mariners to their rooms without exercise or tea breaks within the wider MIQ facility may sound draconian, but the public health emergency required the great good to take precedent, Gorman said.

New Zealand was vulnerable to risks incidents like these posed, as almost 90 percent of the population were not vaccinated, he warned.

New Zealand should take lessons from what is now happening in New South Wales now battling to contain a deadly community outbreak, he added.

"We are so unbelievably vulnerable. If you look at the punt that the premier of New South Wales took a few weeks ago, look at how that's unwound for her. She took a gamble on this Delta variant and she got it wrong.

"And unfortunately paid a huge price. In fact people have died because of that punt and I don't think we should be taking any risks that we don't have to take while we deal with this particular variant."

Gorman said it was almost inevitable other crew members who be diagnosed having the Delta variant.

He understood divers would need to repair a "greywater" leak from the Viking Bay and cautioned they should wear personal protective equipment and get vaccinated.

He said the sewerage material leaking would contain the virus, but this didn't pose a great general public health risk as it wouldn't survive in the ocean. However, divers could be exposed.

"You just add layer upon layer to risks, because of our basic strategy of keeping this disease out of the country until we're vaccinated just simply wasn't executed."

Prime Minister Jacinda Ardern said everything that could be done on infection control was being done, and it was not a concern to have the crew in Wellington rather than at the Jet Park quarantine facility in Auckland.

"We've had Covid-positive cases in different centres before and of course we maintain the same infection controls you would expect in any facility where we have people who might have Covid.

New Zealand had obligations to help people who may be in distress or need medical assistance in its waters, she said.

"That does bring its complexities ... we have to provide, then, facilities and care for those who are not New Zealand citizens."

New Zealand was required to allow recrewing when supply chains were concerned - for cargo vessels particularly - she said, but she had asked officials about foreign fishing ships.

"Do we have an obligation to recrew foreign-flagged fishing vessels who are ultimately fishing a fishery that is of no economic interest to New Zealand and against our environmental interest? That's very different to the obligations we have if people then fall ill within our waters."

Earlier, Professor of Public Health Michael Baker told RNZ the number of infected people did present a heightened risk, but it could still be negligible if there was attention to detail and staff were adequately trained.

"We know that the risk is never zero and every time we have an infected person arrive in New Zealand and go into one of these facilities that does increase the risk of border failure occurring, but it can be managed.

"In general there are two kinds of things that can go wrong. One is staff at facilities are infected and other people go into facilities and are cross-infected ... and then that person who's been infected may leave. Obviously aspects of how they are ... needs to make sure those things don't happen."

Director of Public Health Dr Caroline McElnay told Morning Report she was confident the managed-isolation facility would be well-managed.

McElnay said there was a well-developed system and protocols in place to manage cases.

She said air-conditioning systems were being assessed for safety.

"We're looking at taking steps to minimise that. The mariners are being cohorted on specific floors. I've been advised by the public health service there, who I spoke to last night, that we've ensured there's good spacing between the rooms and we're really focused on minimising any risk that there might be."

Sending the mariners to the Wellington facility instead of the Jet Park in Auckland was decided on the basis of the risk posed to the New Zealand public, she said.